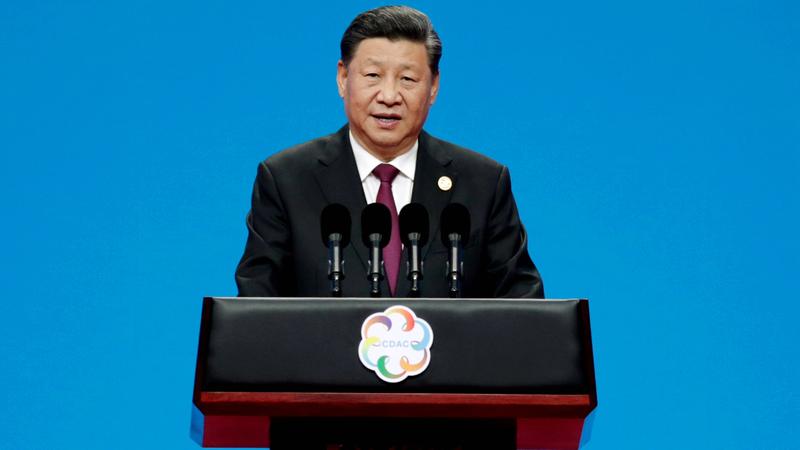 President Xi Jinping poses with Chinese and foreign dignitaries before the opening of the Conference on Dialogue of Asian Civilizations in Beijing on May 15, 2019. (FENG YONGBIN / WANG ZHUANGFEI / CHINA DAILY)

All countries should uphold equality and respect and abandon pride and prejudice to promote dialogue and harmonious coexistence among different civilizations, President Xi Jinping said on Wednesday.

Xi made the remarks in a keynote speech at the opening ceremony of the Conference on Dialogue of Asian Civilizations. The conference was proposed by Xi at the annual conference of the Boao Forum for Asia in 2015.

There are only different civilizations, and there are no superior or inferior civilizations, Xi said, adding that those who think their races or cultures are better, and try to change or replace other cultures, are wrong in their mindset and are doomed to fail.

Every civilization is rooted in its own soil, which embodies the extraordinary wisdom and spiritual pursuit of a country and its own values, Xi said.

He pointed out that if human civilizations were all in one tone and had one model, the world would be monotonous.

In his speech, Xi called on all countries to create conditions for other civilizations to develop while maintaining their own vibrancy.

"We should allow all civilizations of the world to fully bloom," Xi said.

President Xi Jinping poses with Chinese and foreign dignitaries before the opening of the Conference on Dialogue of Asian Civilizations in Beijing on May 15, 2019. (FENG YONGBIN / WANG ZHUANGFEI / CHINA DAILY)

There would be no clash of civilizations as long as people are able to appreciate the beauty of them all, Xi said.

Xi pointed out that if countries are completely isolated from each other, human civilization will lose its vitality.

Noting that Asian people expect an Asia of peace, common prosperity, openness and integration, Xi said maintaining peace is a responsibility that every country should uphold.

Seeking goodwill with neighbors and harmony with all nations is the Chinese way of engaging with the world, Xi said.

Asian people hope that all countries will work together to promote open, inclusive, balanced and win-win economic globalization, eradicate poverty and backwardness, create a carefree life for children and bring happiness and joy to every family, Xi said.

In his speech, the president called for promoting the connection of policy, infrastructure, trade, finance and people, and building a community with a shared future for Asia and mankind.

Asian people have made incredible cultural achievements over the past thousands of years and they have engaged in cultural exchanges since the earliest days, Xi said, citing as examples the ancient trade routes that helped take silk, tea, ceramics, spices, paintings and sculptures across Asia.

Representatives of 47 Asian and other invited countries are participating in the conference.

It is aimed at providing a platform for interaction among young people, local communities and the media.