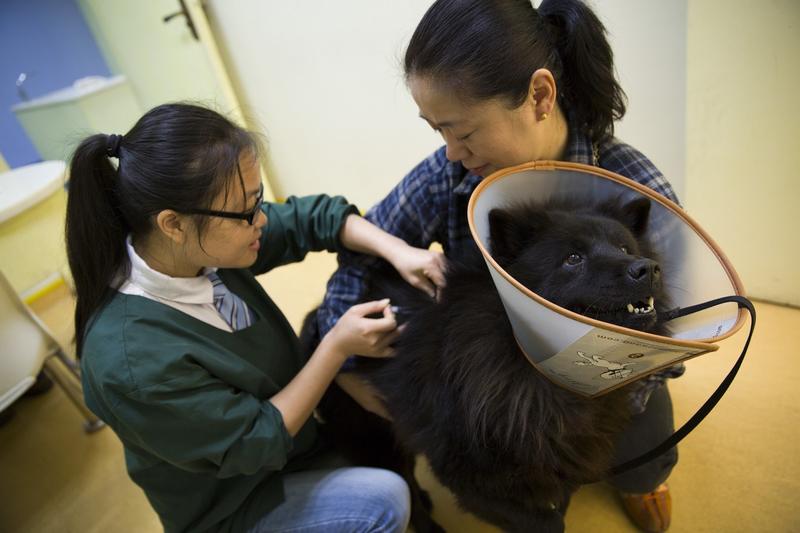 Owning a pet can be a joyful and rewarding experience, but it also involves worry and responsibility. And nothing upsets pet owners more than seeing their beloved companions suffering from sickness.

Increasing awareness of the health and well-being of pets among Chinese owners has seen the pet clinic market boom at an unprecedented rate, particularly in the past five years.

Liu Lang, president of the Beijing Small Animal Veterinary Association and a senior vet for more than 30 years, said as money from the private sector floods into the industry, the country is seeing more and more pet clinics.

Currently, there are 12,000 pet hospitals in China and more than 10 percent are chains from established brands.

"Currently, there are 12,000 pet hospitals in China and more than 10 percent are chains from established brands," he said. "Also, there are more students choosing small animal treatment as a career."

He said there are about 1,600 students graduating with degrees in veterinary medicine every year, and those pursuing careers in pet clinics have gone from less than 10 percent a few years ago to about 40 percent today.

But many owners are experiencing difficulties finding the right vets and clinics in a young market, more so in lower-tier cities. Common concerns include the qualifications of vets, nontransparent charging and the lack of regulation.

An industry report by Goumin.com, one of the biggest online communities for pet owners in China, said there were 91.5 million pet dogs and cats in China in 2018 and the market value of the pet industry reached 170.8 billion yuan (US$24.84 billion). Some 47.1 percent of owners expressed frustration at the lack of medical services for pets, according to the report.

"Almost every residential area comes with a pet care center, mainly for washing and styling," said Wang Yayun, a 50-year-old pet owner in Zhejiang province. "The one near me has a clinic in the pet beauty shop, and the doctor is a retired livestock vet. He is perfectly good at sterilization, but when it comes to serious illness, I won't send my dogs there."

The lack of regulation and industry standards have led to problems, and Liu said that was due to the short history of the Chinese pet clinic business.

"People in China didn't really have pet dogs three decades ago, except foreign ambassadors and important figures; ordinary people were not allowed to keep pet dogs." he said. "It only started in the 1980s when China was doing business with the Soviet Union, and people started to smuggle pet dogs into the country. It was a legally gray area back then, but it did get the industry going."

"In the 2000s, the industry entered a development phase, and people started to think about the medical equipment and treatment market," he added. "But it was only in the last 15 years when investment started to go into the business, and now we are seeing fast growth."

As people become more willing to spend on their pets, the market is expanding to include not just clinics but also facilities and services such as magnetic resonance imaging and beds for worried owners so they can stay overnight with their pets.

"The pet industry was on the rise (between 2014 and 2016), and our future was coming," Dong said. "During this period the most routine work was to meet investors and to assess the future market demand, competition and how to survive."

With the money injected into the hospital, Puppy Town started to grow rapidly, from a small brand owning three clinics in 2013 to having more than 137 clinics in 2018 and 1,200 staff members. It also started to take a more professional approach and set up medical centers to target 12 categories of pet diseases.

"Fujifilm's medical equipment was mainly installed in pet clinics, and the number has grown tenfold since 2014," Zhao said.

Sun Yanzheng, a senior veterinary doctor at the Veterinary Teaching Hospital of China Agricultural University, said the value of the market related to dogs was about 105 billion yuan in 2018, with medicines accounting for 5.3 percent, and medical services accounting for 15.1 percent.

"Medical services account for about 50 percent of the entire pet industry in the United States, and only 20 percent in China," said Sun. "But our growth is far faster than the US, as the US has maintained a 4 to 5 percent annual growth rate in the last decade, but in China, the pace of growth will be more than 15 percent."