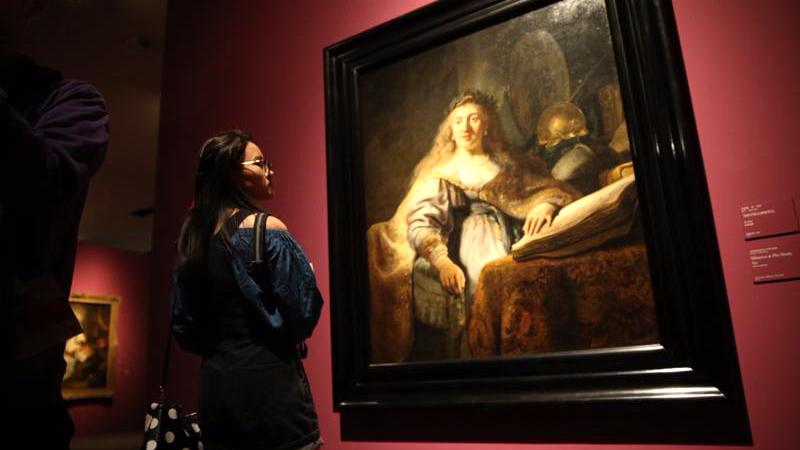 The ongoing 'Rembrandt and His Time' exhibition at the National Museum of China in Beijing features 74 paintings, including 11 by Rembrandt and one by Johannes Vermeer. (Photo by Jiang Dong / China Daily and provided to China Daily)

Thomas Kaplan says he has never "lived" with any of the 250 paintings from his collection. The 54-year-old entrepreneur and investor from the United States, along with his wife, Daphne, have since 2003 put together one of the largest collections of 17th-century Dutch paintings in private hands.

They call it the Leiden Collection, after the city where many featured master painters were based, including Rembrandt van Rijn.

Kaplan says he has never seen his entire collection together. So, when he viewed an exhibition showcasing 30 of his paintings at the Louvre in February, he was "shocked".

"People said you must be very proud (of the collection). I said pride has nothing to do with it. I didn't paint them."

Also shocked were visitors, although they had seen many of the paintings at museums before.

The Kaplans have "enjoyed" anonymity for the past 13 years while lending their paintings to 40 museums.

"In addition to being one of the most aggressive buyers of old masters, we've also been a lending library in Dutch art," says Kaplan.

"The concept of sharing the collection has been part of our philosophy from the first day."

The collection made its China debut on Friday. It features 74 paintings at the National Museum of China in Beijing through September, celebrating the most acclaimed period of the Dutch Golden Age. It will later move to the Long Museum in Shanghai.

"Vermeer and Rembrandt are considered to be the two greatest geniuses of this period (the Dutch Golden Age)," says John Stainton, deputy chairman of Christie's old master paintings department, who was at the Beijing opening.

Kaplan purchased works largely through dealers and also at auctions by Christie's and Sotheby's. Between 2003 and 2008, he bought on average one painting every week.

"Our desire is to build a collection of the best of its kind."

Speaking about the Kaplans' quest, Stainton says: "There are a good number of Dutch 17th-century paintings in private hands. The very best of them are relatively few. But there are still very fine works that come to the market."

He says the exhibition is important to helping people understand what was going at the time in the Dutch Republic (1581-1795), which is now the Netherlands.

"It was a new republic, so the people felt very free for the first time. Commercially, there was a burgeoning wealthy middle class. And artistically, one saw an explosion of creative talent, with this middle class commissioning and buying artists' works," Stainton says.

"It fostered an environment in which artists could really flourish. That is why it was a high point of European old master painting when there was so much creative talent in a relatively short period."

From left: 'Self-portrait with Shaded Eyes' by Rembrandt van Rijn; 'Card Players' by Jan Lievens, and 'Young Woman Seated at a Virginal' by Johannes Vermeer.

The exhibition also features Jan Lievens' Boy in a Cape and Turban, the collection's first loan. It was displayed at Los Angeles' J. Paul Getty Museum in 2004 and 2005.

Kaplan says he saw in the audience a young girl visiting with her class.

"She was so mesmerized by the painting that she was standing there (in front of the painting) alone while the rest of her class walked on. From that moment on, I realized that it's all about sharing our paintings," he says.

Kaplan says loaning his collection helps to bridge cultures just like Rembrandt did. He says that for many people, art is a pass to different kinds of social acceptance and power, but that is not important to them.

"We believe Rembrandt, almost uniquely, lends himself to being able to build bridges between cultures. We don't view him as being an instrument of cultural imperialism," he says.

"And one being able to see Rembrandt is a means of showing what unites us, much more than what divides us."

The collection launched an online catalog in January for people who are interested in information on the 175 works and articles written by museum curators.

"People tell me what a useful tool it is, and it is the reason why very early on we decided we didn't want to do a book. We wanted to be democratically available for students, curators, collectors, auction houses, dealers and historians," says Kaplan.

"With the privilege of being able to own it comes the responsibility of magnifying it for the benefit of the public."

He says he believes that China will become a major factor in the enduring appreciation of Europ's old masters (painters before about 1800).

"In so many areas of today's world, I see China as being the future. I'm not alone in saying that. It's a cliche," he says.

"But some of the areas in which I predict China is the future are not necessarily unanimously viewed to be the case.One of them, as I believe, is that China is clearly making a huge impact on the art world."

Stainton from Christie's says that they've seen an enormous growth in buying interest in old masters from Asia, especially China, in the last five years.

He says half of the six bidders were Asian when it auctioned in London a painting by Peter Rubens that had been previously exhibited in Hong Kong last summer.

"That would not have happened 10 years earlier and maybe even five years ago."