By Lin Wenjie in Hong Kong

In brand building, creativity and face-to-face encounters with customers are the hallmarks of exhibitions promoter Lawrence Chia. He tells Lin Wenjie this is an effective way of lifting market awareness and customer loyalty. 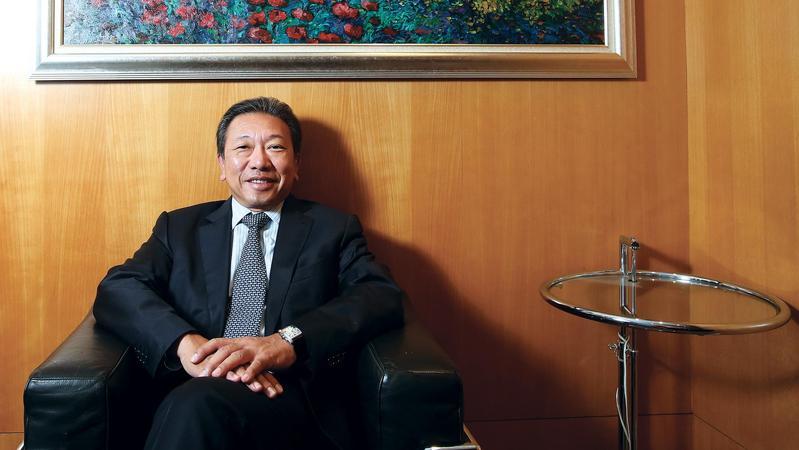 Singaporean entrepreneur Lawrence Chia Song Huat surely has mastered the art of delivering the utmost, critical exposure for clients in return for the ultimate — brand recognition and customer loyalty.

Having been at the helm of Pico Far East Holdings for more than two decades after taking the baton from his brother, he has seen the Hong Kong-listed company grow from a regional business into a multinational enterprise, providing exhibition and event marketing services across the world for big brand names like Disney, Alipay and Holiday Inn.

If you have passion for it, like me, I wake up at 6:30 m every day to go to work. That’s the difference

Instead of straightforward marketing services, Pico’s focus on brand activation — to engage and impress consumers in actual brand experiences — has won the company steadfast profit growth in the past decades, lifting its stock price nearly seven-fold to HK$3.32 since its flotation in 1992.

“We engage ourselves in building face-to-face communication on different platforms for brands and their customers, such as participating in trade shows, live events or online functions, where consumers can interact with the brand. This way, we help the brand to build market awareness and customer loyalty,” Chia tells China Daily.

Citing an example of how it works, he says he would organize a live event for a car launch along with a pop concert, which is very different from the traditional car launch — renting a stadium to hold it.

“We would first identify the target customers, say, young people between 20 and 30 years old, then we would use big data to identify their favorite singer. The brand would sponsor the singer’s concert, and we would exhibit the new car during the show. When the concert goers see that car, they would unconsciously link the car’s brand with the celebrity, and this would increase brand loyalty,” Chia explains.

Moreover, with the incorporation of social media, the concert could go live online, reaching an audience of millions of people, which means the car launch could be seen by more targeted customers. The audience can further pass comments online to interact with each other or with the brand.

“The most important thing is that there’s a connection between the brand and its potential customers. As people are often more active and less shy on the internet, anyone who’s interested in buying the car could just sign up for a test drive. We also engage the audience after the event to collect data to identify potential customers,” he says.

Pico’s creative marketing ideas and its full range services have earned for itself a distinct reputation over the years, winning the hearts of both the people who work for Pico and the people the company works for, something that Chia is proud of.

“With a 50-year history, people trust the Pico brand and believe strongly in our creative services and the ability to deliver the event so, in that sense, it makes it easier for us to win over customers.”

Pico currently boasts a staff strength of 2,600 across 27 countries, mostly in Asia. With a comprehensive performance-related bonus scheme, the company’s staff are highly motivated to accomplish their jobs. For any employee who makes a mistake, there’s also a self-reflection scheme to let him or her know how to do better and how much they need to catch up.

“We’ve built a vision to empower our staff. The more profit you rake in for the company, the more bonuses you’ll get. As the profit is shared by the whole team, everyone has the passion to do the job. But when someone makes a mistake, he or she will take less money home. We don’t punish people because what we’re concerned most is what can be learned from the mistake and how that can be shared with other people, so as to avoid making the same mistake again,” says Chia.

He sees the biggest challenge for the company as locating the right talents, as creative people are hard to retain since they always like to move on and try new things. In addition, as technology now plays a vital role in the marketing industry, Pico also has to compete with the tech industry to win over tech people.

“We’ll continue to go out there to recruit talents and, at the same time, we’re spending a lot of resources on managing and training talents and trying to keep them,” he says.

What he values most when recruiting talent is not work experience or knowledge of the industry, but the person’s character, because “a good character makes a good employee”.

“Knowledge and skills can be trained and improved, but a person’s character cannot be changed overnight. We can equip the talent with the essential knowledge, but we can’t change a person’s nature.”

Due to fewer big projects, Pico Far East’s first-half profit saw a drop of 15.6 percent for the six months ended April 30 to HK$1.71 billion, while its net profit fell slightly by 3.9 percent to HK$124 million, according to the company’s interim report.

But, with the summer holidays and the Christmas season on the horizon, brands will be more active in launching marketing campaigns, he says.

‘Without the passion in you, nothing is likely to get going’

Raised in an average Singaporean family with nine brothers, Lawrence Chia Song Huat, executive chairman of Pico Far East Holdings, realized the importance of pulling together as a family to make ends meet.

After his elder brother Chia Siong Lim founded Pico in 1969, the young Song Huat started helping out in the business during the school holidays.

When he grew up, he served in the Singaporean army for two years before his brother sent him to the United States to further his studies in 1981. After graduating from the University of Tennessee, he headed straight back to the family business in 1984, starting from scratch.

“Although I studied finance at university, I worked in the sales department, project management department and the warehouse department in Pico. But I had never worked in the finance department because I was eager to learn everything that’s new to me,” says Chia.

Before assuming the chairmanship of Pico Far East Holdings in 1994, Chia was managing director of the Pico Group of Companies in Europe and North America, based in London from 1989 to 1994. Again, he started from zero to turn the business around.

“It was tough there in the beginning but, later on, I found it was all about attitude, learning to adapt, understanding the culture, and seeing what it takes to make the company profitable.”

Chia sees the most important thing as building up the passion in one’s job despite difficulties or obstacles, no matter what that job is — a driver, a cook, a leader or a chairman, everyone should learn to cultivate passion in the job.

“If you don’t have passion, life will be very miserable. It’ll be stressful getting up each morning to go to work, but if you have passion for it, like me, I wake up at 6:30 am every day to go to work. That’s the difference.”

He notes that the most difficult part of being a leader is the ability to propagate continuous self-improvement and self-education. As the emergence of new technologies is affecting the way every business operates, a leader has the obligation to keep up the trend and direct his employees on the way they do things.

“A leader needs to make sure that he stays in front at all times so that he can develop the right strategy and a right vision for the rest to follow. A leader cannot afford to relax because new challenges keep coming. He or she can’t stop learning, thinking, can’t stop making changes. The trend is always on the move, he or she must be there all the time.”

But how can one keep up with the trend all the time? Chia suggests that leaders stay with young people to learn about the latest technology, and feel not ashamed to learn from one’s subordinates. In addition, a leader can also join organizations to communicate with other chief executives to make sure he’s informed of everything that’s going on in the industry.

“You must be out there with the staff and customers, understand what they want, and keep an eye on what’s going on in the world. For example, when the iPhone X comes onto the market, you don’t necessarily have to buy it, but you need to learn how to use it.”

And, instead of recruiting an employee to train him, Chia adds, he’d rather hire smart people to learn from him. “If I don’t know how to use the social media, I’ll hire people to teach me about the social media, so a leader is also a follower. Your job is to empower the employees and follow them.”

“That means, we must do our job as if it is our last one, so that we’ll try our best to do it. If we fail today, we don’t have a job tomorrow. Thus, we need to make sure that we don’t make mistakes, we must deliver a perfect project each time, so that we’ll have other projects.”

Chia is also a member of the global network of young chief executives, Young Presidents’ Organization (YPO) — a platform for executives to connect, share their experiences and challenges.

“I knew nothing about Hong Kong when I first came here to take up the chairmanship, but YPO helped me link up with Hong Kong society, and I built up friendship with many peers in Hong Kong. I’ve learned a lot from them. YPO is also an educational institution that allows me to have a close bond with peers. I can’t imagine my life here without YPO,” he says.

Chia urges young people to develop their passion, try to discover what they want to do. He believes that passion can be developed because if anyone has the passion, he or she can do a fantastic job. The deeper the passion, the greater the performance.