Vice-premier arrives in US for trade talks 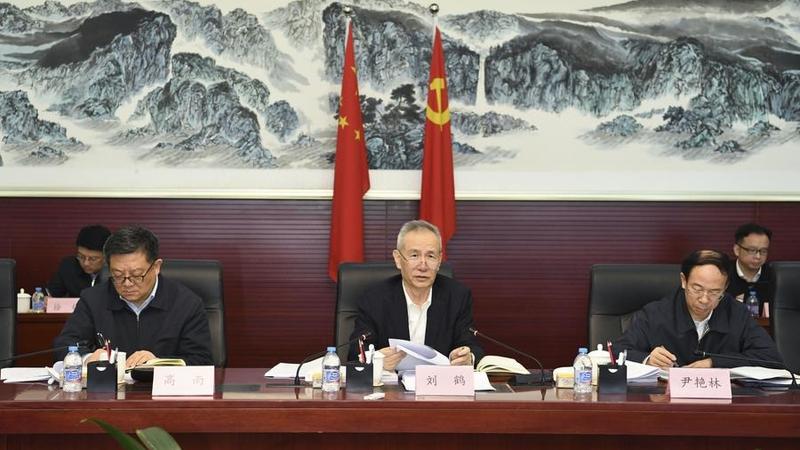 In this April 17, 2018 photo, Chinese Vice-Premier Liu He conducts a site investigation at the Ministry of Industry and Information Technology in Beijing. President Xi Jinping's special envoy, Vice-Premier Liu He, arrived in Washington on May 15, 2018 for economic and trade consultations at the invitation of the US government. (GAO JIESHE / XINHUA)

Businesses and economists expect the new meeting of senior officials from Beijing and Washington to generate positive outcomes that not only will enable the two countries to avoid a trade war but also put the commercial relationship of the world's two largest economies on a more solid footing.

President Xi Jinping's special envoy, Vice-Premier Liu He, arrived in Washington on Tuesday for economic and trade consultations at the invitation of the US government.

Liu, also a member of the Political Bureau of the Communist Party of China Central Committee, led a delegation whose members come from major economic sectors of the Chinese government.

Robin Xing, chief China economist at Morgan Stanley, said that while there still are risks and uncertainties that bear watching, negotiation and de-escalation of tensions will likely be the endgame for the two countries.

"We maintain our longstanding view that the US and China will eventually negotiate a deal that will bring about a gradual and nondisruptive adjustment in the trade relationship, thereby limiting the impact of trade friction on economic growth," he said in a research note.

"Assuming the US does implement tariff hikes on US$50 billion worth of goods from China, we believe the impact on China's growth could be partly cushioned by resilient global growth on the back of strong investment and improving productivity growth," he said.

US businesses have voiced opposition to the proposed tariffs on US$150 billion in Chinese imports announced by US President Donald Trump's administration.

The office of the US Trade Representative started a three-day hearing on Tuesday about the tariffs proposed under the Section 301 of the US Trade Act of 1974, following an investigation into China's intellectual property practices. More than 2,700 comments were received.

Apple Inc Chief Executive Tim Cook said in a recent White House meeting with Trump that he opposed the administration's approach on trade with China, according to a report by Bloomberg.

Cook said his message focused on how cooperation can boost the economy more than nations acting alone.

Jeremie Waterman, president of the China Center of the US Chamber of Commerce, said, "We welcome Chinese companies as very capable and powerful competitors. ... We don't think adding tariffs on Chinese products will benefit US businesses."

David French, senior vice-president of the federation, was to testify on Wednesday about the difficulties associated with readjusting an existing supply chain.

"It's not as simple as flicking a switch and moving to another country," French told Inc. magazine. "Some countries don't have the port capacity to serve a market as large as the US, so even if you could find the manufacturing capacity, it could take longer to get it onto a container ship," French said.

Zhong Nan contributed to this story