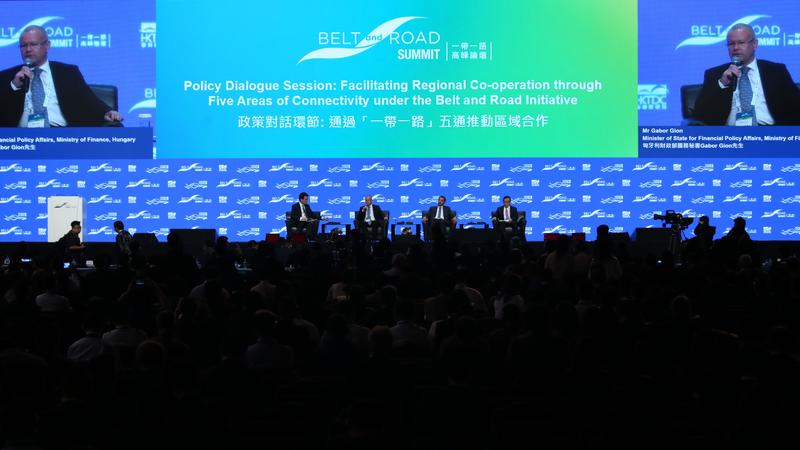 Gabor Gion, state secretary for financial policy affairs of Hungary’s Ministry of Finance, speaks at a panel discussion during the Belt and Road Summit on Wednesday. (PARKER ZHENG / CHINA DAILY)

With global trade mired in uncertainties, economy and commerce chiefs from nations involved in the Belt and Road Initiative have urged different economies to strengthen relations with each other and continue to open up.

They made the plea during a panel discussion on Wednesday on the first day of the two-day Belt and Road Summit in Hong Kong, attended by officials from around the world, including the HKSAR, Southeast Asia, Europe and the Middle East.

At the panel discussion entitled “Facilitating Regional Co-operation through Five Areas of Connectivity under the Belt and Road Initiative”, the officials reckoned that the strong links among economies involved in the BRI could create a win-win situation.

Hong Kong’s Secretary for Commerce and Economic Development Edward Yau Tang-wah, who chaired the panel, pointed out that the five areas of connectivity under the BRI comprise policy coordination, connectivity of infrastructure, unimpeded trade, financial integration and closer people-to-people ties.

He said all the participants believed that the world economy will become flat, and countries have tried every means to remove barriers for trade activities, but it seems that hurdles like tariffs have returned in recent years.

Yau asked the panelists what the five areas of connectivity mean to them and what made them decide to join the BRI.

Hungary opens up with BRI

Gabor Gion — state secretary for financial policy affairs of Hungary’s Ministry of Finance — said his country’s ambition to open up further to Eastern markets is line with BRI objectives.

Hungary, which is among the first countries to join the initiative, decided to cooperate more with Asian countries to boost its economy and make it grow in a much more sustainable way.

In 2015, the Hungarian government launched various strategies to diversify the country’s economy as the central European nation has been relying too heavily on the European market. Even today, about 70 percent of Hungary’s exports are bound for member states of the European Union.

To facilitate Chinese enterprises investing in Hungary, Bank of China has set up its regional headquarters there. In addition, Hungary issued state bonds in China in early 2017 to help strengthen economic relations with China.

According to Gion, Hungary has set a target of its economic growth outperforming the European Union’s GDP by at least 2 percentage points for the full-year of 2019. Hungary is now one of the fastest-growing economies in the EU, with a GDP growing at 4.8 percent last year.

But, with the slowing down of the global economy, Gion said countries must be prepared for an uncertain future. Given the current level of globalization, he believes there would be no winner in trade conflicts.

Abdulla Al Saleh — undersecretary for foreign trade and industry at the United Arab Emirates’ Ministry of Economy — said he does not have a clear picture of the global economy’s future within five years, as many things remain unpredictable.

“The adaptation of technology in business has brought about a big change. Meanwhile, major players’ political agendas are also hard to forecast,” he said.

Leading a 70-strong delegation to the summit, Al Saleh said his country places high value in the BRI, adding that the open economies and societies in both Hong Kong and the UAE have provided both economies with limitless opportunities.

As a Southeast Asian country known for its open economy, Cambodia is also seeking closer economic cooperation with Hong Kong.

Sok Sopheak — secretary of state at the Cambodian Ministry of Commerce — said Cambodia has a generally open and liberal foreign investment regime. It now allows 100-percent foreign ownership companies to be set up in the country.

He said Cambodia is focusing on increasing trade activities with the region, including the Chinese mainland, Hong Kong and fellow member states of the Association of Southeast Asian Nations.