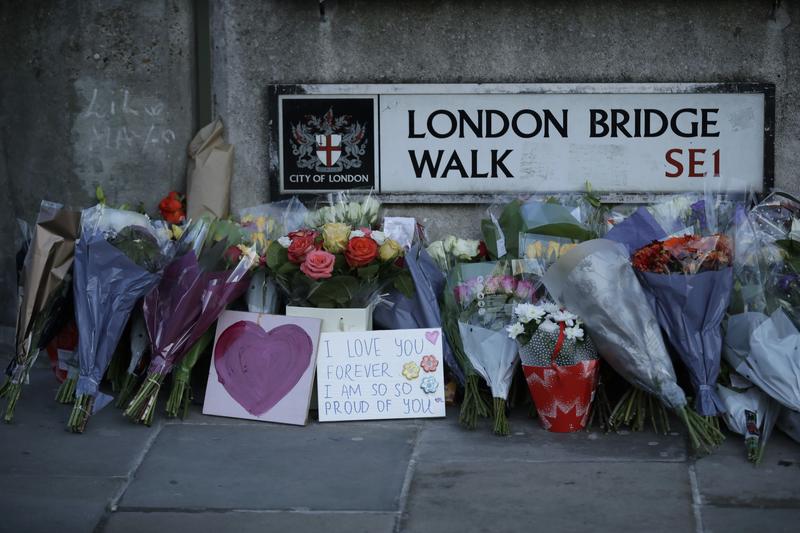 Tributes are placed by the southern end of London Bridge in London, Dec 2, 2019. (MATT DUNHAM / AP)

LONDON — British Prime Minister Boris Johnson and main opposition Labour Party leader Jeremy Corbyn paused Monday to honor the two people killed in the London Bridge attack, then went back to trading blame for the security failings that allowed a man who had been jailed for terrorist crimes to go on a violent rampage in the heart of London.

Usman Khan stabbed two people to death and injured three others Friday before being shot and killed by police on the bridge. Two of the injured remain hospitalized in stable condition.

Politicians, who are campaigning ahead of Britain’s Dec 12 election, immediately sought to deflect blame for the first fatal attack in London since 2017. Johnson accused Labour of being soft on terrorism and vowed to end the early release of inmates convicted of terrorist crimes. He said it was “repulsive that individuals as dangerous as this man” could be freed. 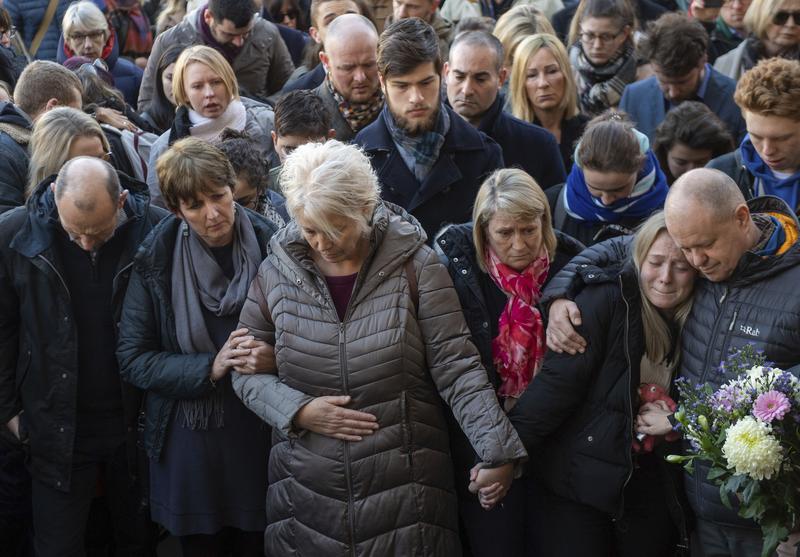 The family of Jack Merritt take part in a vigil at The Guildhall to honour him and Saskia Jones who were both killed in Friday's attack on London Bridge, in Cambridge, England, Dec 2, 2019. (JOE GIDDENS / PA / AP)

Corbyn blamed years of cuts to the police, prison and parole services by Conservative governments left the system unable to monitor offenders

Corbyn blamed years of cuts to the police, prison and parole services by Conservative governments left the system unable to monitor offenders.

He said the tragedy raised “enormous questions” about how the attacker’s state of mind had been evaluated, and “what supervision and monitoring he was under” after leaving prison.

Political dignitaries, city officials, friends of the victims and Londoners who had never met them attended a vigil outside London’s medieval Guildhall to remember Jack Merritt and Saskia Jones, who died in the attack, and to honor members of the emergency services and bystanders who fought the attacker with fists, fire extinguishers and even a narwhal tusk.

Mayor Sadiq Khan said people should “take hope from the heroism of ordinary Londoners and emergency services who ran toward danger, risking their lives to help people they didn’t even know.”

Former University of Cambridge students Jones, 23, and Merritt, 25, were fatally stabbed by the 28-year-old attacker at an event run by the Cambridge-based prisoner rehabilitation program Learning Together. Merritt worked for the program and Jones was a volunteer.

Usman Khan was attending the event at London’s Fishmongers’ Hall and had returned for the afternoon session when he started stabbing people. Police believe he acted alone.

He was pursued onto London Bridge and restrained by staff from the venue and others from the conference, including former inmates. Police opened fire after he flashed what looked like a suicide vest. It turned out to be fake.

Toby Williamson, chief executive of Fishmongers’ Hall, paid tribute to staff who tried to help the wounded and fight off the attacker. Williamson said one staffer, a kitchen worker he identified as Lukasz, pulled a 1.5 meter narwhal tusk from the wall and charged at Khan, allowing others to escape.

Williamson told Sky News that Lukasz, wielding the tusk, fought one-on-one with Khan for about a minute and suffered cuts on his arm, but didn’t “flinch for a moment.” However, Williamson said in later interviews that Lukasz fought the attacker off with a pole while a different man brandished the tusk.

The attack has pushed security to the top of the agenda in the election campaign.

Johnson, a Conservative, blamed legal changes made by a previous Labour government for the fact that Khan was freed from prison a year ago after serving half of a 16-year sentence for terrorist offenses.

Khan was arrested in 2010 and admitted to being part of an al-Qaida-inspired plot to set up a terrorist training camp in Pakistan. He was given an “indeterminate” sentence in 2012 that specified he could only be released when he was judged not to be a danger to the public. He appealed, and the sentence was fixed at 16 years. Like many British inmates, he was released after serving half that time.

Opposition parties blamed years of public spending cuts by the Conservatives, who have been in power since 2010. Khan was on probation, subject to restrictions on his movement and wearing an electronic tag when he launched his attack.

Philip Lee, a former Conservative justice minister who quit the party and joined the opposition Liberal Democrats, accused the prime minister of “misleading and lying” with his simplistic depiction of the problem.

"The solutions to this are complex,” he said.

British authorities are investigating whether Usman Khan lapsed back into radicalization after his release, or deceived people into thinking he had left extremism behind

Khan spent time at HMP Whitemoor, a maximum-security prison where Learning Together runs courses for inmates. The Daily Telegraph reported Monday that he was featured as a success story on Learning Together’s website. The site appears to have been removed since the attack.

Johnson said the case showed that some criminals are beyond rehabilitation.

"There are unquestionably some cases which are just too tough to crack and alas he appears to have been one of them,” he said during a campaign visit to Southampton on England’s south coast.

But Ian Acheson, a criminologist who led a government-commissioned review into Islamic extremism in British prisons, said UK deradicalization programs were ineffective and overstretched authorities were ill-equipped to deal with extremists determined to play the system.

“This disaster is one that was created in the Treasury,” Acheson told the BBC. “At the heart of this is the destruction of the prison and probations service through crazy failed ideological and austerity cuts.”

After the attack, authorities scrambled to review the cases of 74 other people who had been jailed for terrorism and released in similar circumstances to Khan.

As part of that review, a 34-year-old man was arrested in Stoke-on-Trent, central England, and sent back to prison for violating his release conditions. 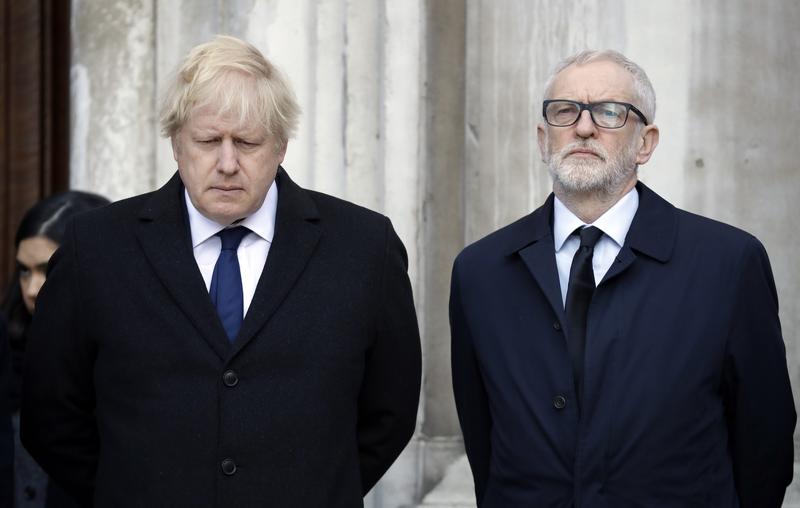 Merritt’s family also cautioned against knee-jerk responses. His relatives said he “would not want this terrible, isolated incident to be used as a pretext by the government for introducing even more draconian sentences on prisoners, or for detaining people in prison for longer than necessary."

In an emotional article in The Guardian newspaper, David Merritt said his son “would be seething at his death, and his life, being used to perpetuate an agenda of hate that he gave his everything fighting against.”

“Jack believed in the inherent goodness of humanity, and felt a deep social responsibility to protect that,” he wrote. “Through us all, Jack marches on.”