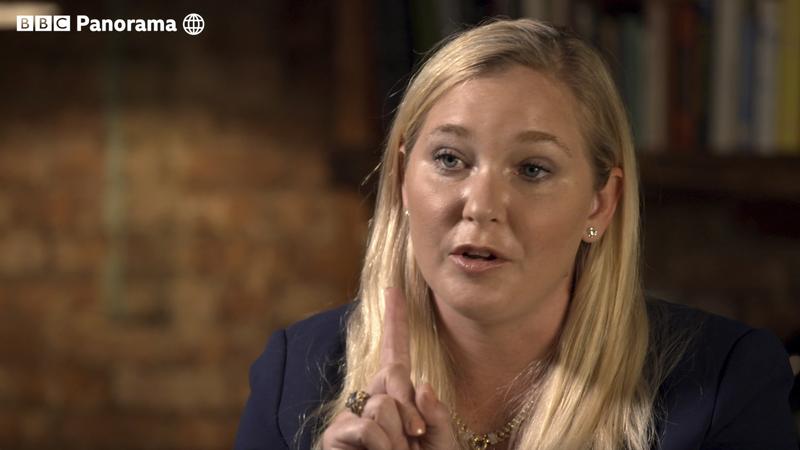 In this image taken from video issued by the BBC, Virginia Roberts Giuffre gestures during an interview on the BBC Panorama program that will be aired on Dec 2, 2019. Roberts Giuffre says she was a trafficking victim made to have sex with Prince Andrew when she was 17 is asking the British public to support her quest for justice. She tells BBC Panorama in an interview to be broadcast Monday evening that people "should not accept this as being OK." Giuffre's first UK television interview on the topic describes how she was trafficked by notorious sex offender Jeffrey Epstein and made to have sex with Andrew three times, including once in London. (BBC PANORAMA VIA AP)

LONDON — Prince Andrew suffered fresh scrutiny Monday night when the woman who says she was a trafficking victim made to have sex with him when she was 17 asked the British public to support her quest for justice.

Virginia Roberts Giuffre told BBC Panorama that people “should not accept this as being OK.”

Giuffre’s first UK television interview on the topic describes how she says she was trafficked by notorious sex offender Jeffrey Epstein beginning in 2001 and ordered to have sex with Andrew three times, including once in London.

Andrew, 59, has categorically denied having sex with Giuffre and apologized for his association with Epstein, who died in prison in August in what New York City officials said was a suicide.

The disgraced prince has stepped down from royal duties “for the foreseeable future” because of his friendship with Epstein and the allegations of sexual wrongdoing with an underage girl. He says he is willing to cooperate with appropriate law enforcement inquiries if required to do so.

The scandal is one of the worst to have gripped the royal household in recent decades and has severely tarnished the reputation of Andrew, one of Queen Elizabeth II’s four children.

U.S. law enforcement agencies have not commented publicly on whether his actions are being investigated. British police looked into Giuffre’s claim, made in 2015, that she was trafficked into England to have sex with Andrew but did not launch a full-scale investigation.

Andrew tried to contain the damage by giving a televised interview on the topic in November, but it backfired because he did not express concern for Epstein’s victims and because he defended his friendship with Epstein as “honorable.”

The televised documentary broadcast Monday night painted a detailed portrait of how Epstein abused dozens of young women at his luxury properties in the Caribbean and New York and quoted Giuffre’s account of being ordered to have sex with Andrew on three occasions.

Giuffre, now 35, described how she says she was recruited by Ghislaine Maxwell to give Epstein massages when she was working as a locker room attendant at Donald Trump’s Mar-a-Lago estate in Palm Beach, FL. and later taken to London to meet Andrew.

Maxwell has denied any wrongdoing.

Breaking down in tears, Giuffre described the humiliating aftermath of being made to have sex with Andrew at a townhouse in London after a night out at the exclusive Tramp nightclub. She said she was told to dance with him by Maxwell, Epstein’s girlfriend at the time.

“It was horrible and this guy was sweating all over me,” she said. “His sweat was like it was raining basically everywhere, I was just like grossed out from it, but I knew I had to keep him happy because that's what Jeffrey and Ghislaine (Maxwell) would have expected from me."

“That just made me sick,” Giuffre said.

“There was a bath,” she said. “It started there, then went into the bedroom. It didn’t last very long, the whole procedure. It was disgusting.”

She said: “He got up and he said 'Thanks'. I sat there in bed, just horrified and ashamed and felt dirty.”

Giuffre said she felt trapped: “It was a wicked time in my life. It was a really scary time in my life. I had just been abused by a member of the royal family ... Yeah, I didn’t have chains, but these powerful people were my chains.”

She admitted that her memory was foggy at time and that she might have some dates and place wrong but insisted she was certain of the key facts.

In his recent interview, Andrew said he had never met Giuffre. He said he had a medical condition that prevented him from sweating.

Epstein was a wealthy financier with many powerful friends. He was in prison on sex trafficking charges when he died.