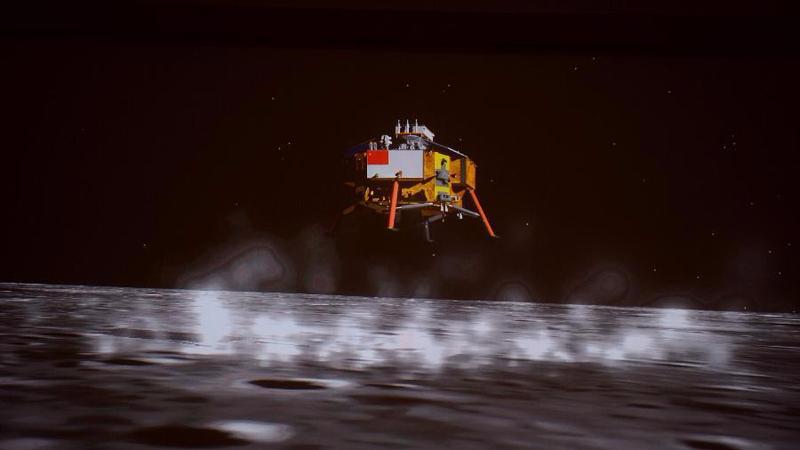 This Dec 14, 2013 photo shows the lunar probe Chang'e-3 on the screen of the Beijing Aerospace Control Center in Beijing, capital of China. The relay satellite for the Chang'e-4 lunar probe, which is expected to land on the far side of the Moon later this year, has been named "Queqiao" - magpie bridge. (JIN LIANGKUAI / XINHUA)

HARBIN - China plans to launch the Chang'e-5 lunar probe next year, which is expected to bring lunar samples back to the Earth, according to Pei Zhaoyu, deputy director of the Lunar Exploration and Space Program Center of the China National Space Administration (CNSA).

While addressing a space conference Tuesday, China's Space Day, Pei said that the Chang'e-5 lunar probe will be very complex, containing four parts: an orbiter, a returner, an ascender and a lander.

ALSO READ: CASC to carry out 35 aerospace launches in 2018

After fulfilling the three steps of its lunar probe program -- orbiting, landing and returning -- China will conduct further exploration of the Moon, including landing and probing the polar regions of the Moon, said Tian Yulong, secretary general of CNSA.

China will further develop its space industry after the unmanned lunar exploration is accomplished and its own space station is established around 2022.

Many experts have proposed building a scientific research base on the Moon in the future, said Wang Liheng, a senior consultant of the China Aerospace Science and Technology Corporation and an academician of the Chinese Academy of Engineering.

Manned lunar landing and exploration are a common desire for humanity and a springboard to go deeper into space. Setting up a scientific research base on the Moon would enable scientists to conduct research, gain experience and lay the foundation for future cosmic exploration, Wang said.

Meanwhile, the relay satellite for the Chang'e-4 lunar probe, which is expected to land on the far side of the Moon later this year, has been named "Queqiao" or magpie bridge, announced the CNSA.

In a Chinese folktale, magpies form a bridge with their wings on the seventh night of the seventh month of the lunar calendar to enable Zhi Nu, the seventh daughter of the Goddess of Heaven, to meet her husband, separated from her by the Milky Way.

Li Guoping, a spokesman of CNSA, said work on the Chang'e-4 lunar probe is progressing well.

Chang'e-4 will carry payloads for Germany, the Netherlands, Saudi Arabia and Sweden,

The far side of the mood is of great scientific interest, but landing there requires a relay satellite to transmit signals.

The relay satellite will be sent into the halo orbit of the Earth-Moon Lagrange Point L2 in late May, and the Chang'e-4 lunar lander and rover will be sent to the Aitken Basin of the south pole region of the Moon about six months later.