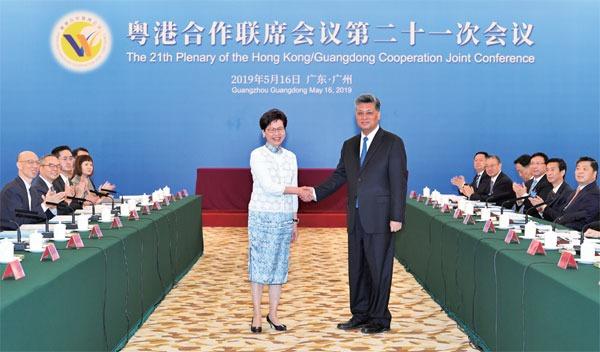 The Hong Kong Special Administrative Region and Guangdong province are riding high in cooperating in a wide range of sectors under the development framework of the Guangdong-Hong Kong-Macao Greater Bay Area, SAR Chief Executive Carrie Lam Cheng Yuet-ngor said in Guangzhou on Thursday.

The joint efforts in such fields as infrastructure, transportation and youth development have begun to yield results

The joint efforts in such fields as infrastructure, transportation and youth development have begun to yield results, she told the 21th plenary of the Hong Kong-Guangdong Cooperation Joint Conference in the provincial capital, at which various cooperation deals were signed by officials from both sides.

In civil aviation, the Guangdong provincial government will supply sand for the third runway project at Hong Kong International Airport - a project that will strengthen the city's status as a global aviation hub - Lam said.

On completion, it would greatly lift the airport's capability to handle both passenger and cargo traffic.

At the same time, access to the mega Hong Kong-Zhuhai-Macao Bridge will be increased as more categories of vehicles are allowed to enter the Hong Kong Port area, said Lam, noting that business chambers, universities and scientific research institutions would most likely to be among the first to benefit.

In youth development, the Guangdong authorities will help Hong Kong young people to live or develop their careers in the Bay Area by offering them entrepreneurship training subsidies, one-off startup funds and house-rental assistance.

Guangdong will also allow Hong Kong's higher education and research organizations to apply for financial technology projects in the province in line with similar aid being granted by the central government.

The SAR, Lam pointed out, has been involved in the nation's reform and opening-up in the past four decades - a historic initiative that started with and focused on Guangdong province. Through the process, Hong Kong and Guangdong have taken their close relationship to a new high.

With the Bay Area as the major strategy for an innovation-driven new era, Hong Kong will leverage its advantages from "one country, two systems" and team up with Guangdong in building a first-class Bay Area, she said.

Guangdong Governor Ma Xingrui vowed that the province will continue to step up cooperation with Hong Kong on the heels of the commission of such notable projects as the Hong Kong-Zhuhai-Macao Bridge and the Hong Kong section of the Guangzhou-Shenzhen-Hong Kong Express Rail Link.

The impetus has also come from a host of supporting policies rolled out to benefit Hong Kong and Macao residents working in other cities in the Bay Area, providing fresh opportunities for youth entrepreneurship and innovation in the two places, he said.

The conference marked the first official meeting of senior officials from Hong Kong and Guangdong since the Bay Area's outline development plan was unveiled in February.