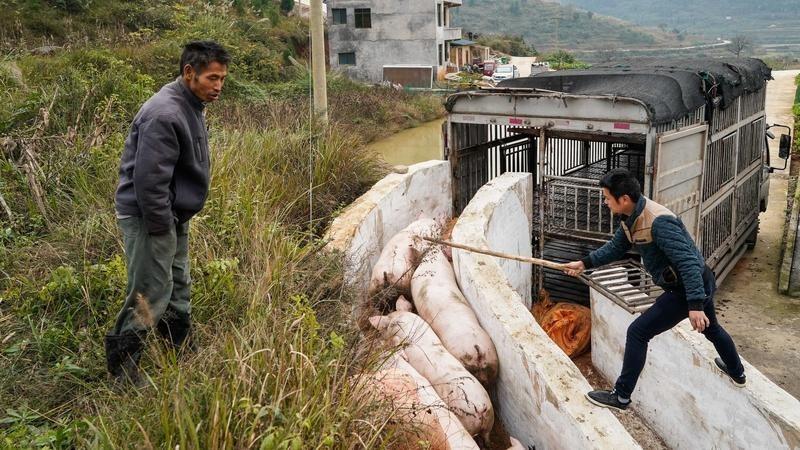 The supply of pork in China may remain tight for the next few years, a leading pig industry expert said recently, citing "unprecedented losses" due to African swine fever, which has spread around the country since August last year.

Wang Lixian - president of the Chinese Association of Animal Science and Veterinary Medicine's pig branch and a researcher at the Chinese Academy of Agricultural Sciences' Institute of Animal Sciences - said domestic pig stocks had plummeted since the first outbreak in the country was reported in Liaoning province, with industry insiders generally estimating a loss of between 30 and 60 percent.

However, the Ministry of Agriculture and Rural Affairs said last month that China's overall meat supply can meet demand this year despite tight pork supplies

"The domestic pig industry has suffered unprecedented losses due to the disease," Wang said on Friday. "Worse, the losses are continuing."

However, the Ministry of Agriculture and Rural Affairs said last month that China's overall meat supply can meet demand this year despite tight pork supplies.

Production of other types of meat, including mutton, beef and chicken, rose in the first half of the year, with production of chicken up 13.5 percent year-on-year, the ministry said on Aug 31.

Meanwhile, 819,000 metric tons of pork were imported in the first half of the year, up 26.4 percent year-on-year, and more imports were expected, it said.

Consumption of pork in China has fallen since African swine fever started to spread in the second half of last year, and the ministry said demand for pork is expected to decrease by about 10 percent this year.

Meanwhile, some meat-processing companies have large stocks of frozen pork, which could help ease the supply shortage, it said.

Zhu Zengyong, a pork analyst at the Chinese Academy of Agricultural Sciences, said although pork supply is tight, the domestic meat supply will, in general, be adequate this year due to reasons such as increased production of alternative meats such as chicken, increased pork imports and decreased pork consumption.

"It is expected that production of pork will stop falling by the end of the year, and the production will gradually recover in the latter half of next year," Zhu said.

In July, the number of pigs being raised in China was down by 9.4 percent from the previous month and by more than 32 percent year-on-year, figures released by the ministry showed.

The number of breeding sows continued to fall in July and was down 32 percent year-on-year, it said.

More than 150 African swine fever outbreaks, covering all provinces, autonomous regions and municipalities on the Chinese mainland, had been reported by the end of August, the ministry said.

However, the frequency of outbreaks has decreased this year, it said earlier.

The average price of pork in 16 provinces and municipalities reached nearly 36 yuan (US$5.1) per kilogram by the end of August, up more than 90 percent year-on-year

Reduced pork supplies have led to rising pork prices since early this year. The average price of pork in 16 provinces and municipalities reached nearly 36 yuan (US$5.1) per kilogram by the end of August, up more than 90 percent year-on-year, data from the ministry showed. It previously estimated the overall price of pork in the country would rise by more than 70 percent in the second half of this year.

China is the world's biggest pork producer and consumer, producing about half of the world's total. Pork is the most commonly consumed meat in most parts of China.

"The rebuilding of pig stock will be a slow process, even if reliable and effective vaccines to prevent African swine fever come out," he said. "The supply of pork will be a big problem over the next few years."

Although fewer outbreaks had been reported in the past few months, a high level of alert was still needed to prevent new outbreaks, he said, adding the company has implemented very strict virus control and prevention measures, with everyone entering its premises required to undergo a sterilization process.

In a guideline released by the State Council on Tuesday, the central government has urged various government departments and local authorities to intensify efforts to support production of pork and ensure its supply, including improving insurance policies for the pork industry and easing restrictions on raising pigs.

Several ministries, including the Ministry of Agricultural and Rural Affairs and the Ministry of Ecology and Environment, have also announced various measures recently to encourage pig raising and pork transport, including allowing farmers to use farmland to raise pigs and increasing subsidies to counties that export large amounts of pork to other parts of China.

The measures also include supporting the construction of infrastructure related to pork production, transportation and animal disease prevention and control.

To encourage pork transport and supply, vehicles legally transporting breeding pigs and frozen pork have been exempted from toll charges from Sept 1 to the end of June next year.

Wang said the heavy losses to the pork industry due to African swine fever had exposed problems in domestic pig raising, including high-density farming practices and lax biosafety measures.

"The lessons will propel the industry to place high importance on biosafety, which will lead to more effective control of other diseases in pig raising," he said.