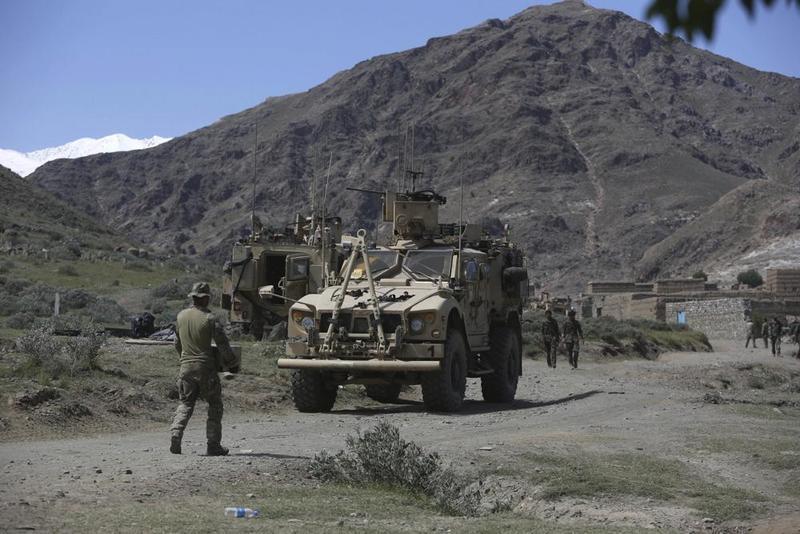 In this April 17, 2017 file photo, US forces and Afghan commandos are seen in Asad Khil village near the site of a US bombing in the Achin district of Jalalabad, east of Kabul, Afghanistan. (RAHMAT GUL / AP)

KABUL – Just like in the past years, security problems have topped the challenges facing the government throughout this year in militancy-plagued Afghanistan, where thousands of US and NATO-led forces have been fighting to win the so-called war on terror.

To win the longest and costliest battle in US history, inherited from his predecessors George W Bush and Barack Obama, President Donald Trump unveiled a new strategy in August for the war in Afghanistan.

In the controversial strategy, which also covers South Asia, Trump vowed to mount pressure on countries supporting the ongoing insurgency in the central Asian state, stressing that more pressure be exerted on the Taliban and like-minded groups fighting in Afghanistan.

While rejecting any plans to withdraw US forces from the insurgency-plagued country in the near future, Trump said "our new strategy is a shift from a time-based approach to one based on conditions."

"America will continue its support for the Afghan government and the Afghan military as long as they confront the Taliban in the field," he said about the new strategy outlined on Aug 21.

In the new strategy on Afghanistan and South Asia, the US president also pointed finger at Afghanistan's immediate neighbor, Pakistan, as being a sanctuary for insurgents, and warned, "We can no longer be silent about Pakistan's safe havens for terrorist organizations, the Taliban, and other groups that pose a threat to the region and beyond."

The new strategy advocates for an increase in troops fighting militancy and has been welcomed by the Afghan government amid criticism by opposition circles that the new approach will intensify the war in the already conflict-battered country.

After Trump announced the new strategy on Afghanistan, Pentagon Chief James Mattis said that he would send more troops to the field.

Although Trump said in the new strategy that the number of troops deployed to Afghanistan would remain a secret, media reports have suggested that number of US troops has increased from 11,000 in the past to 15,000 after unveiling the new strategy, to help bolster Afghan forces' power in the so-called war on terror.

The US also called upon its allies to follow in its steps and send more troops to Afghanistan.

Complying with the demand, NATO member states and allied nations have pledged to send additional troops to the militancy-plagued country to help the embattled Afghan forces stabilize their country.

This is the first time since the drawdown of the US-led coalition forces from Afghanistan in 2014 and the handing over of security responsibilities to Afghan forces by early 2015.

The US air campaign in Afghanistan this year has also been increased since Trump assumed office and US-led coalition forces' aircraft, according to media accounts, dropped more than 1,630 bombs compared to 545 reported cases of bombings in 2016.

The US-led coalition forces' airstrikes have further intensified since the unveiling of Trump's new strategy and the forces, in addition to using drone strikes, have also used F-22 jet fighters and B-52 bombers, according to media reports. 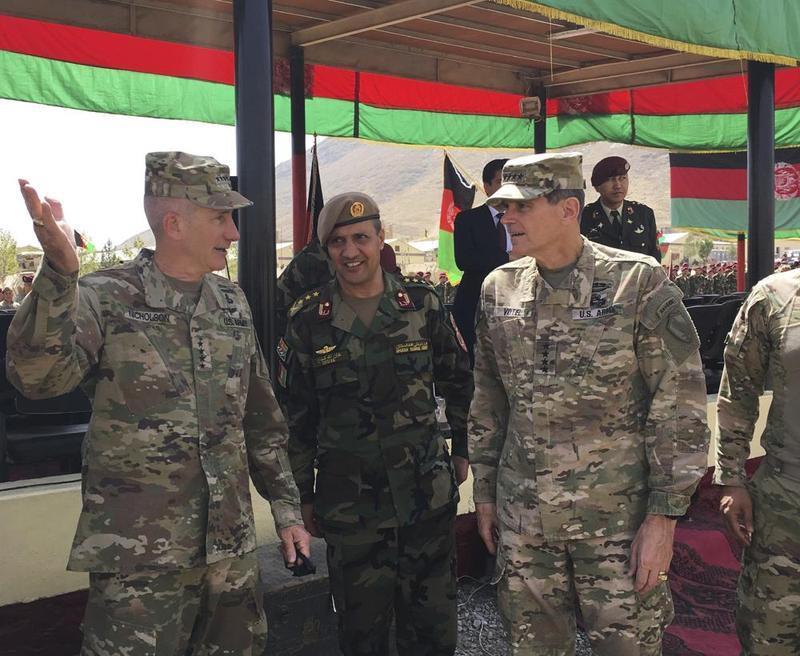 US Gen John Nicholson, top US commander in Afghanistan, left, talks with Col Khanullah Shuja, commander of the national mission brigade of the Afghan special operations force, and US Gen Joseph Votel, head of US Central Command, at Camp Morehead in Afghanistan on Aug 20, 2017. (LOLITA BALDOR / AP)

The intensified air campaign in November targeted what the US described as the funding network of Taliban militants in Bahramcha, Musa Qala and adjoining areas in the restive, poppy-growing Helmand province, along the border with Pakistan. The campaign reportedly killed scores of militants and allegedly destroyed more than two dozen heroin labs.

Taliban militants rebuffed the allegations saying the armed outfit does not operate heroin labs and all those killed in the air strikes were civilians.

Patricia Gossman, a senior Afghan-Based researcher with the Human Rights Watch (HRW) expressed concerns over the surge in airstrikes pointing out the chances of increase in civilian casualties.

Many Afghans, including former President Hamid Karzai, have referred to the strategy as warmongering, saying the new policy would fuel the war instead of bringing peace to the war-battered nation.

Karzai, who led Afghanistan with support from the US for 13 years after the collapse of the Taliban regime in late 2001, has also warned that new US strategy would undermine regional cooperation with the US to bring peace to the country.

Afghanistan's immediate and extended neighbors have also slammed the new US policy on Afghanistan.

General Asif Ghafoor, a spokesperson for Pakistan's army, has reportedly rejected Trump's remarks regarding Islamabad's alleged support of the Taliban, asserting that no terrorist camps exists in Pakistan.

China, which has been supporting the Afghan peace process, showed its appreciation for Pakistan's contribution in the fight against terrorism and voiced its hope that the new US approach could lead to ensuring lasting peace and stability in Afghanistan.

Concerned about the lingering conflict and increasing militancy in Afghanistan, Russia has reportedly expressed doubts in the new US approach.

The Taliban militants themselves, in a sharp reaction, denounced the new US strategy for Afghanistan as warmongering and vowed to step up their resistance.

Zabihullah Majahid who speaks for the Taliban group, has vowed that the Taliban fighters would change Afghanistan to the American forces' graveyard if the US administration continues its "occupation" of Afghanistan.

Since the unveiling of the new US strategy on Afghanistan and owing to the increased pressure exerted on the militants, several key leaders and commanders of the Taliban, Islamic State (IS) and al-Qaida network are among hundreds of thousands of people, including civilians, who have been killed in the war-torn country.

US Commander Nicholson said recently that the war against the militants has "turned the corner" and the Taliban can't win the war in the face of increasing pressure. He stated that: "Their choices are to reconcile, live in irrelevance, or die."