BEIJING - Chinese authorities on Monday unveiled the development outline for the Guangdong-Hong Kong-Macao Greater Bay Area, aiming to build the region into "a role model of high-quality development."

The plan, comprising 11 chapters, was released by the Central Committee of the Communist Party of China and the State Council in Beijing

The plan was released by the Central Committee of the Communist Party of China and the State Council.

Hong Kong's Chief Executive Carrie Lam welcomed the central government’s promulgation of the Outline Development Plan for the Guangdong-Hong Kong-Macao Greater Bay Area (Outline Development Plan). According to a press release issued by her government, she expressed her gratitude to the central government for placing importance on the views of the Hong Kong Special Administrative Region (SAR) Government in the course of formulating the outline.

The document guiding the current and future cooperation and development of the Greater Bay Area, covers the period from the current year to 2022 in the immediate term and up to 2035 in the long term.

According to the blueprint, the Guangdong-Hong Kong-Macao Greater Bay Area, with a marked increase in its economic strength and regional competitiveness, already possesses the fundamental conditions for developing into an international first-class bay area and a world-class city cluster.

It document has 11 chapters, comprising the background of the plan, the overall requirements, the spatial layout, plans for developing an international innovation and technology hub, expediting infrastructural connectivity, building a globally competitive modern industrial system, taking forward ecological conservation, developing a quality hub for living, working and traveling, strengthening cooperation and jointly participating in the Belt and Road Initiative, jointly developing Guangdong-Hong Kong-Macao cooperation platforms, and the implementation of the plan.

Such foundation of development is made up of distinctive geographical advantages, robust economic strength, high concentration of key factors of innovation, advanced level of internationalization and solid cooperation foundations, according to the document which also compiles the opportunities and challenges for the development and stresses the plan's significance.

An HKSAR government spokesman pointed out that according to the Outline Development Plan, Hong Kong, Macao, Guangzhou and Shenzhen had been identified as core cities, as well as core engines for driving regional development. The four cities will leverage their comparative advantages to lead the development of nearby regions.

The HKSAR government pledged to work with relevant central ministries, the People's Government of Guangdong province and the Macao SAR government to implement the plan. 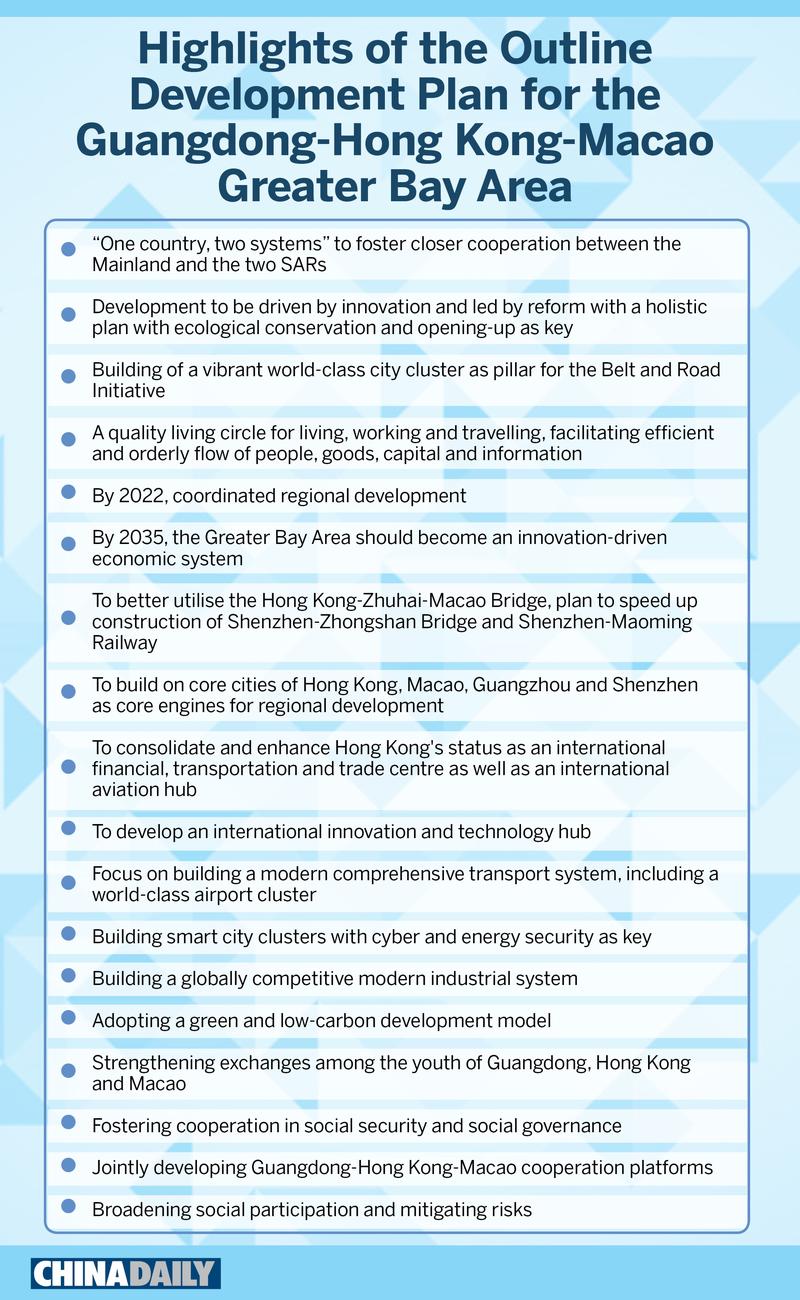 The plan calls for measures to build a spatial network, improve the development system of the city cluster and towns, and equitably develop the Pan-Pearl River Delta Region.

It calls for a rational division of labor and complementary positioning of large, medium-sized and small cities.

According to the plan, efforts should be made to further enhance coordination in regional development, facilitate the integrated development of urban and rural areas, and build a scientifically structured, compact and highly efficient bay area development framework.

In the near term, according to the plan, by 2022, the combined strength of the Greater Bay Area should increase substantially, the cooperation among Guangdong, Hong Kong and Macao should be deepened and broadened, and the internal driving forces for development should be further enhanced in the region.

By 2035, the Greater Bay Area should become an economic system and mode of development mainly supported by innovation, with its economic and technological strengths vastly increased and its international competitiveness and influence further strengthened, according to the plan.

In the meantime, the markets within the Greater Bay Area should be highly connected, with very effective and efficient flow of various resources and factors of production; the coordination of regional development should remarkably improve, with the influence on neighboring regions further strengthened, according to the plan.

Conservation and ecology play an important part in the overall scheme with the plan aiming to significantly improve levels of conservation and efficient use of resources, effectively protect the ecological environment, and fully develop an international hub.

A symposium will be held by the governments of Guangdong, Hong Kong and Macao in the morning of Feb 21 in Hong Kong, during which the National Development and Reform Commission will introduce the contents of the Outline Development Plan. Officials from the three governments and representatives from relevant sectors will attend the symposium to explore opportunities in the Greater Bay Area.