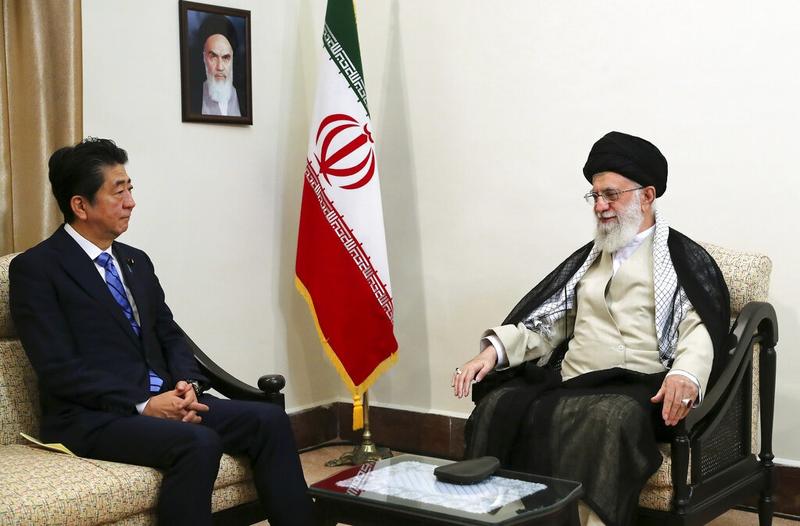 LONDON — Iran will not repeat its "bitter experience" of negotiating with the United States, Supreme Leader Ayatollah Ali Khamenei told Japanese Prime Minister Shinzo Abe on Thursday, amid an escalating confrontation between Tehran and Washington.

Abe, who visited Tehran carrying a message to Iranian leaders from US President Donald Trump, warned on Wednesday of unintended clashes in the crisis-hit Middle East after meeting Iranian President Hassan Rouhani.

I do not see Trump as worthy of any message exchange, and I do not have any reply for him, now or in future.

Tensions between the United States and Iran, already at a high pitch, were expected to escalate further on Thursday after reports of suspected attacks on oil tankers in the Gulf.

Washington has dispatched additional forces to the region in recent weeks after accusing Tehran of threatening shipping there. Iran has denied being behind previous similar attacks.

State media quoted the Ayatollah as saying in his meeting with Abe: "I do not see Trump as worthy of any message exchange, and I do not have any reply for him, now or in future."

READ MORE: Iran's supreme leader rules out negotiations with US

The Ayatollah also said Trump's promise not to seek regime change in Iran was "a lie", adding that he did not believe Washington's offer of honest negotiations with Tehran.

Strains between Washington and Tehran have sharply increased in recent weeks, a year after the United States abandoned a 2015 nuclear agreement between Iran and world powers to curb Tehran’s nuclear program in exchange for the lifting of sanctions.

“The Islamic Republic of Iran has no trust in America and will never repeat the bitter experience of previous negotiations with America in the framework of the JCPOA,” Ayatollah Khamenei said, using the acronym for the nuclear deal. “No wise and proud nation will accept negotiations under pressure.”

Abe told reporters in Tehran that "Supreme Leader Khamenei made a comment that the country will not and should not make, hold or use nuclear weapons, and that it has no such intentions."

Last month Washington revoked sanctions waivers that had allowed some countries, including Japan, to continue buying Iranian crude, effectively ordering all countries to stop purchasing Iranian oil or face sanctions of their own.

Despite pushing for imports to continue, Japan has stopped importing oil from Iran for now to avoid US sanctions.

On a visit to Japan last month, US President Donald Trump welcomed Abe's help in dealing with Iran, highlighting what he called the "very good relationship" between Tokyo and Tehran.