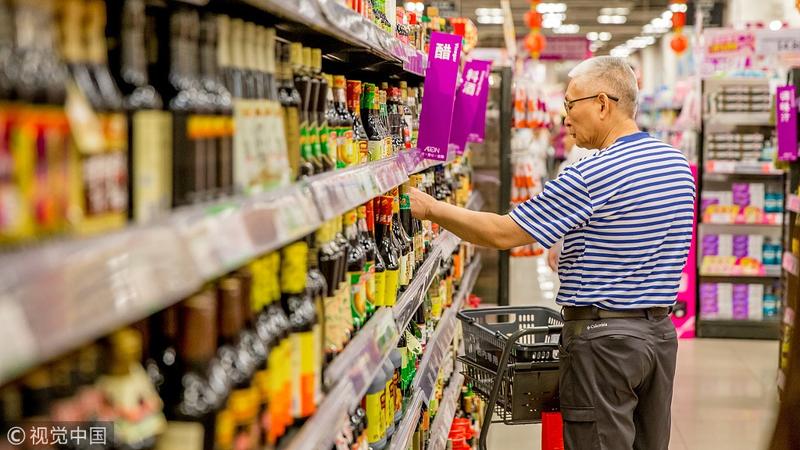 This photo shows a man at a supermarket in Guangzhou, Guangdong province, Aug 25, 2018. (PHOTO / VCG)

BEIJING - Consumption is expected to remain the largest contributor to China's economic growth in 2019, a Ministry of Commerce official said.

Wang Bin, deputy director of the Department of Market Operation and Consumption Promotion at the MOC, said at a recent meeting that consumption is expected to contribute to 65 percent of economic growth in 2019, with an expected 9-percent increase in total retail sales of consumer goods.

Consumption is expected to contribute to 65 percent of China's economic growth in 2019, the MOC said

China's consumer market will continue its steady development and maintain a stable and positive outlook regardless of the negative factors and pressure, Wang added.

The three-day New Year holiday saw a robust start of China's consumption market in 2019, with the retail sales of 60 Beijing-based business service companies hitting 3.01 billion yuan (about US$438.6 million) during the period, up 6.3 percent year on year, official data showed.

Meanwhile, consumption in Shanghai during the three days reached 13.5 billion yuan, up 10.6 percent from the previous year.

To improve the consumption structure and let consumption play a bigger role in accelerating economic development, the country has launched various measures, including increasing the supply of goods and services, reducing tariffs, expanding imports and introducing policy incentives for cross-border e-commerce.

Moreover, China has announced special individual income tax deductions to lower the tax burden of people with certain expenditures. The move, which went into effect on the first day of this year, is expected to further stimulate consumption.