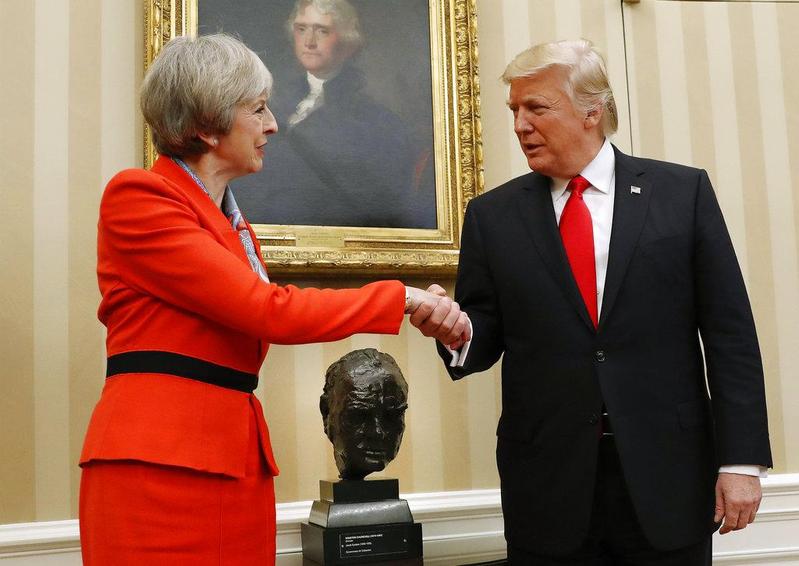 This is a Jan 27, 2017 file photo of US President Donald Trump as he shakes hands with British Prime Minister Theresa May in the Oval Office of the White House in Washington. (PABLO MARTINEZ MONSIVAIS / AP)

LONDON - A few days after his inauguration, US President Donald Trump stood beside British Prime Minister Theresa May in the White House and proclaimed the strength of the "most special relationship" between their two countries.

Ten months later, that relationship looks decidedly strained. As May and Trump traded criticism Thursday over his retweets of a far-right group's anti-Muslim videos, British lawmakers labeled the US leader a hate peddler.

They also urged May's government to revoke an invitation for Trump to visit Britain as a guest of Queen Elizabeth II.

The furor erupted after Trump, who has almost 44 million Twitter followers, on Wednesday retweeted three anti-Muslim videos posted by a leader of the far-right group Britain First. The tiny group regularly posts inflammatory videos purporting to show Muslims engaged in acts of violence, but without providing context or supporting information.

The chill between London and Washington could not come at a worse time, as Britain prepares to leave the EU and forge new economic relationships

The UK ambassador in Washington, Kim Darroch, complained to the White House, and May's spokesman said the president was wrong to retweet the group's content.

Trump responded with a tweet urging May to focus on "the destructive Radical Islamic Terrorism that is taking place within the United Kingdom" instead of on him.

May countered Thursday that "we take the need to deal with the terrorist threat very seriously" and rebuked the leader of Britain's closest ally.

"The fact that we work together does not mean that we are afraid to say when we think that the United States have got it wrong and to be very clear with them," May said Thursday during a visit to Amman, Jordan. "I am very clear that retweeting from Britain First was the wrong thing to do."

London Mayor Sadiq Khan was one of many politicians urging the government to scrap the still-unscheduled state visit by Trump that first was announced during May's trip to Washington in January.

Khan, the British capital's first Muslim mayor, said the American president had promoted "a vile, extremist group" and an official visit by him "would not be welcomed."

In the House of Commons on Thursday, lawmakers criticized Trump in unusually blunt language. Labour's Naz Shah accused him of promoting "the hate-filled ideology of fascism." Conservative Tim Loughton said Twitter should take down Trump's account for peddling "hate crime."

ALSO READ: UK's May criticizes 'wrong' Trump tweets, but visit till on

White House spokeswoman Sarah Huckabee Sanders told reporters Thursday that she does not believe Trump knew anything about the deputy leader of Britain First, Jayda Fransen, before he shared the anti-Muslim videos from her account with his followers.

"I think he knew what the issues are, and that is that we have a real threat of extreme violence and terrorism, not just in this country, but across the globe," Sanders said.

The chill between London and Washington could not come at a worse time, as Britain prepares to leave the European Union and forge new economic relationships around the world.

May was the first world leader to meet with Trump after he took office in January partly because Britain is eager to strike a free trade deal with the US after it leaves the EU in 2019.

But the prime minister's bid to nurture a close relationship with the unpredictable president has not gone according to plan.

Trump greeted May with warm words, and even briefly held her hand as the two leaders walked along a colonnade at the White House.

Within hours of May's departure, Trump signed an order banning travel to the US from several majority-Muslim countries. House of Commons Speaker John Bercow said soon afterward that Trump would not be invited to address Parliament during his state visit, an honor given to President Barack Obama and other world leaders.

Analysts predicted Thursday that the trans-Atlantic relationship would be strong and important enough to survive the current strain.

"The core UK-US special relationship is cooperation in nuclear weapons, special forces and intelligence," said Tim Oliver, an expert in Europe-North America relations at the London School of Economics. "That core has traditionally been protected from the vagaries of presidential and prime ministerial relations.

"Trump, however, is testing it in ways we've not seen before."

Emily Thornberry, the Labor Party's foreign affairs spokeswoman, said May had made an error of judgment in inviting Trump so soon after he took office.

"We ought to be holding him at arm's length," Thornberry told Sky News. "She's put the queen in this incredibly invidious position."

May insisted Thursday that the visit was still on - though she suggested it was not imminent.

"An invitation for a state visit has been extended and has been accepted," she said. "We have yet to set a date."