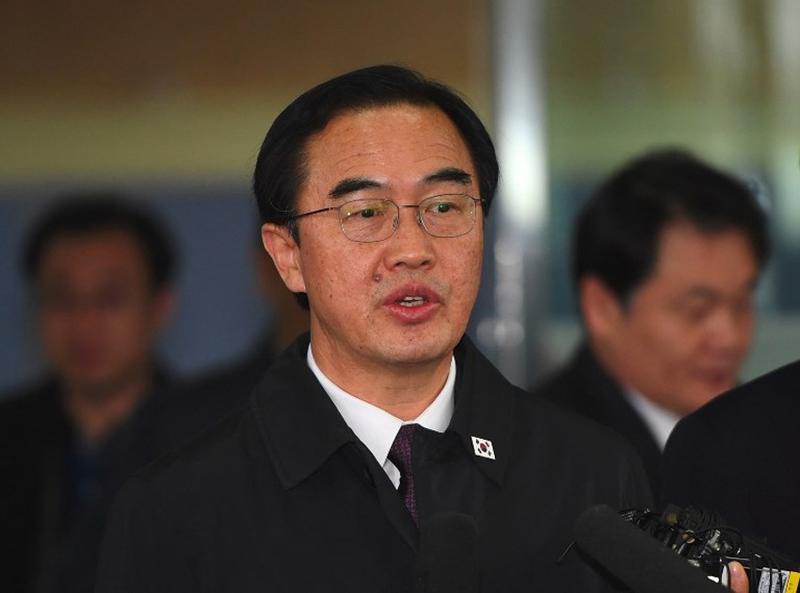 In this March 29, 2018 photo, Unification Minister Cho Myoung-gyon of the Republic of Korea (ROK) speaks to the media in Seoul before his departure to the border truce village of Panmunjom to hold a high-level inter-Korea talks. (JUNG YEON-JE / AFP)

SEOUL – The Democratic People's Republic of Korea (DPRK) and the United States would need the process of narrowing differences during initial negotiations for the denuclearization of the Korean Peninsula, the unification minister of the Republic of Korea (ROK) said Monday.

Cho Myoung-gyon’s comments came after US Secretary of State Mike Pompeo's visit to Pyongyang over the weekend.

ROK unification minister said Seoul will closely communicate with Pyongyang, Washington and other relevant parties for improving their relationship

Shortly after Pompeo left Pyongyang, the DPRK foreign ministry said in a statement carried by the Korean Central News Agency (KCNA) that while the DPRK asked for simultaneous moves on formally declaring an end to the 1950-53 Korean War and the denuclearization, the US side only insisted that the DPRK take steps for the comprehensive, verifiable and irreversible denuclearization.

Calling the US demand "unilateral" and "gangster-like," the DPRK foreign ministry said the US side never mentioned the issue of establishing a peace regime on the Korean Peninsula.

After their historic summit in Singapore on June 12, DPRK leader Kim Jong-un and US President Donald Trump signed a joint statement to denuclearize the Korean Peninsula in return for security guarantees for the DPRK.

Pyongyang regards the signing of a formal agreement with Washington to end the Korean War, which ended with an armistice, as a key measure to remove the danger of war on the peninsula and normalize the DPRK-US relations. The peninsula remains technically at war with the armistice agreement.

The ROK minister said the leaders of the DPRK and the US were moving in the same direction and showing clear willingness toward the denuclearization, anticipating a continued, condensed process in denuclearizing and building peace on the peninsula.

Cho said the ROK will closely communicate and cooperate with the DPRK, the US, other relevant parties and the international community to create a virtuous cycle of the improved relations between Seoul and Pyongyang, and between Pyongyang and Washington, with relevant parties advancing the denuclearization and peace settlement on the peninsula.