By An Baijie and Zhang Yue 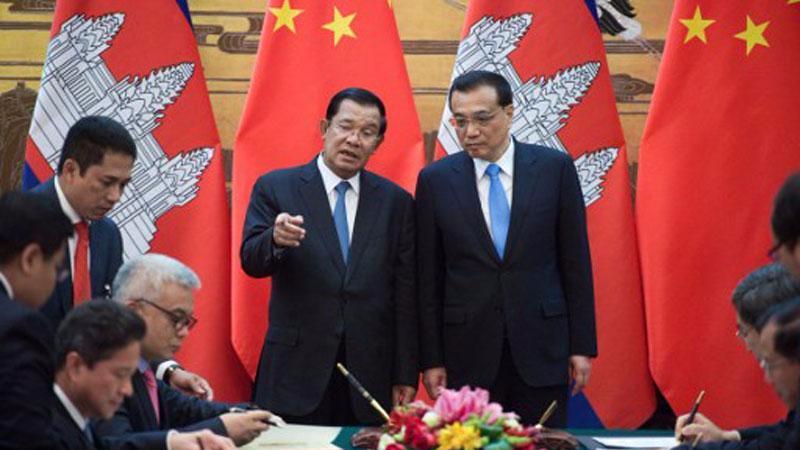 Chinese Premier Li Keqiang talks with Cambodia's Prime Minister Hun Sen during a signing ceremony at the Great Hall of the People in Beijing on May 16, 2017. (Nicolas Asfouri / Pool / AFP)

China signed 13 cooperation documents with Cambodia on Tuesday in areas such as infrastructure, finance, maritime research and tourism as the two countries moved forward to build the Belt and Road.

Witnessed by Premier Li Keqiang and Cambodian Prime Minister Hun Sen, the plans, agreements and memorandums of understanding were signed in Beijing. Hun Sen is on a five-day official visit to China, during which he attended the Belt and Road Forum for International Cooperation.

Noting that China is dedicated to upgrading the level of cooperation with Cambodia, Li expressed a willingness to connect development strategies and improve the quality and quantity of trade between the two countries.

China would like to cooperate with Cambodia on key projects related to production capacity, investment and agriculture, which would help Cambodia develop its economy and improve the people's livelihoods, Li said.

Next year marks the 15th anniversary of China-ASEAN strategic partnership, and Cambodia will host the second meeting of Lancang-Mekong Cooperation initiative.

Cambodia cherishes the traditional friendship with China, Hun Sen said, adding that Cambodia would like to implement all the agreements reached by the leaders of the both sides.

The Cambodian prime minister offered congratulations on the success of the Belt and Road Forum.

Cambodia is willing to push forward the development of China-ASEAN relations and enhance the Lancang-Mekong Cooperation initiative, Hun Sen said.

Liu Zhenmin, vice-foreign minister, said the Cambodian prime minister's visit is "fruitful and of great significance" as the two side reached wide consensus on jointly building the Belt and Road, infrastructure, maritime cooperation, tourism and trade.

Mentioning that the Sihanoukville Special Economic Zone in Cambodia, constructed by China, is developing well, Liu said that Chinese companies will expand investment in Cambodia.