By Li Hongyang and Wang Jian 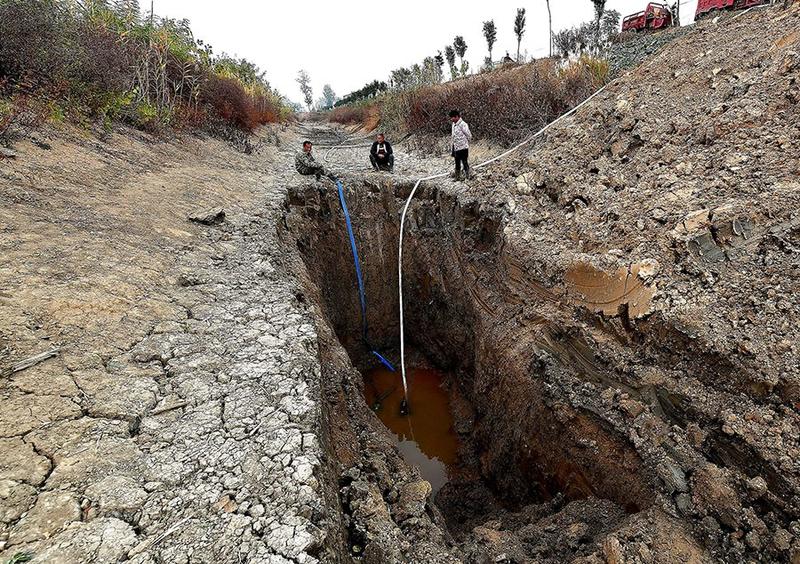 Villagers draw irrigation water from underground in Linquan county, Anhui province, on Tuesday. The province only received about 30 percent of the regular amount of rainfall in October and is experiencing one of the worst droughts in 40 years. (PHOTO PROVIDED TO CHINA DAILY)

A "quite severe" drought-one of the worst in 40 years-expanded along the Yangtze River areas and parts of South China last month, and will persist but be slightly alleviated this month, forecasters from the meteorological administration said.

On Thursday, the ministries of finance and emergency management earmarked disaster relief funds of 418 million yuan (US$60 million) to provinces that were hardest hit

On Thursday, the ministries of finance and emergency management earmarked disaster relief funds of 418 million yuan (US$60 million) to provinces that were hardest hit. The funds will be used to ease damages and help people affected by the drought.

From July to October, the average temperatures in Hubei, Hunan and Jiangxi were the highest the provinces had ever experienced during that three-month period since 1961.

Another six provinces experienced moderate to severe drought, leading to an adverse affect on about 901,000 square kilometers of arable land. The drought receded in these areas at the end of October, with its coverage dropping by about 43 percent.

Li said that the continuous drought has made crops wilt and has harmed the environment.

Between August and September, the average vegetation coverage along the middle and lower reaches of the Yangtze River decreased significantly. In Jiangxi, Hunan and Fujian, for example, that coverage decreased by 1 to 3 percent year-on-year.

Citrus production in Jiangxi province dropped by about 10 percent year-on-year, and the quality of the fruit declined dramatically. Rice also suffered losses.

In Tangxi village in Fuzhou, Jiangxi, about 15 hectares of land produced no crops, causing losses of about 350,000 yuan, according to Zeng Yumin, chief of an agricultural cooperative in the village.

Water resources in Anhui and Jiangxi were running dry, and the reservoir was below the dead water level, the minimum level required to use water from the reservoir.

According to the administration, ponds were dried up, and the Poyang Lake in Jiangxi province entered the dry season earlier than usual. In Jiangxi, about 770,000 people were facing water shortages by Oct 30, according to the local authority.

Ye Dianxiu, a chief forecaster of the administration, said that in November, the temperature in most areas affected by drought will still be 1 to 2 C higher than in other areas. However, the impact may not be as severe as last month.

"Climate change contributed to the drought," she said. "It can influence the pattern of circulation on a large scale, and then lead to extreme weather and climate events.

"With the development of global warming, the number of days without rain as well as the frequency of droughts keep increasing in the fall," she added.