By An Baijie and Li Xiaokun

Xi begins state visit to partner in Belt and Road 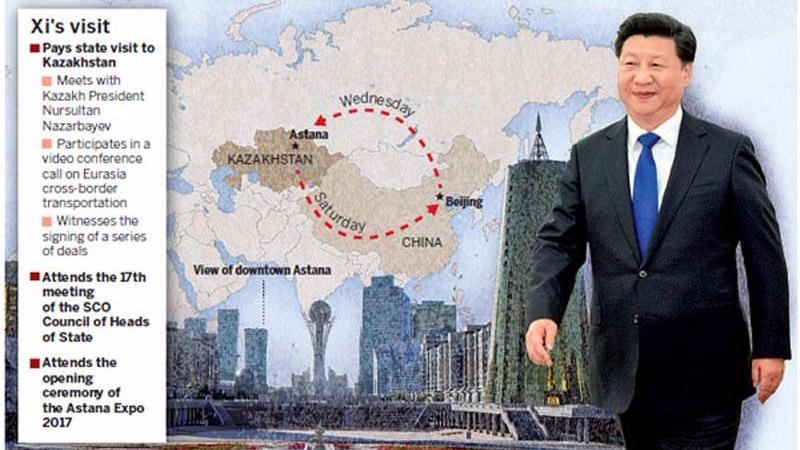 China and Kazakhstan will tap their great potential for cooperation, including jointly building the Belt and Road, President Xi Jinping wrote in a signed article on Wednesday.

The president arrived in Astana, capital of Kazakhstan on Wednesday. In a statement issued upon arrival, he said, "The Sino-Kazakh relationship has set an example of a friendly neighborhood, equal treatment and mutual benefits for the international community."

The two countries have strengthened political trust, pushed forward pragmatic cooperation in all areas steadily, and enhanced coordination in global and regional affairs in the past 25 years since the establishment of diplomatic relations, Xi said.

The four-day visit to Kazakhstan is Xi's third trip to the Central Asian country. During the stay he will also attend the Shanghai Cooperation Organization annual summit and the opening ceremony of the Astana Expo 2017.

Xi extended sincere greetings and best wishes to the Kazakh people. Xi also mentioned his frequent meetings in recent years with his Kazakh counterpart, Nursultan Nazarbayev, saying that the two presidents have developed good working relations as well as a personal friendship.

In the article published in the Kazakh newspaper Kazakhstanskaya Pravda on Wednesday, Xi said China will promote cooperation with Kazakhstan in jointly building the Belt and Road.

It was during his first visit to Kazakhstan back in 2013 that Xi proposed the Silk Road Economic Belt Initiative. Four years later, the idea that took root then has become a global public benefit.

"The general direction of the two countries' national development was determined during President Xi's visit to Kazakhstan in 2013, namely, the joint building of the Silk Road Economic Belt," Chinese Ambassador to Kazakhstan Zhang Hanhui said.

Sun Zhuangzhi, secretary-general of the SCO Research Center under the Chinese Academy of Social Sciences, said enhancing cooperation between the two countries as part of the Belt and Road Initiative will serve as a convincing model for other parties.

Xi wrote in the article that industrial capacity cooperation should be made a new area of growth in bilateral cooperation.

The president especially noted that Kazakh singer Dimash Kudaibergenov is "now a household name in China". Popular Chinese films and TV series, such as A Bite of China or Family on the Go, have captivated more and more Kazakh viewers.

"China will encourage more visits by its citizens to Kazakhstan for tourism so that they will see for themselves the unparalleled beauty of this 'Uly Dala Eli', the land of the great steppe," the president wrote.

The two sides will also deepen security cooperation, including measures for Belt and Road cooperation, to ensure the security of oil and gas pipelines and other large projects, he added.

As for the SCO summit, Xi said in the article that "heads of the member states will make a number of important decisions on deepening cooperation in all fields and completing the organization's first membership expansion".

China will succeed Kazakhstan as the rotating chair at the conclusion of this summit.

Xi added that the theme of the Astana Expo 2017, Future Energy, "is very much in line with the global trend toward green, healthy and sustainable economic growth and highly compatible with China's initiative on a green Silk Road".