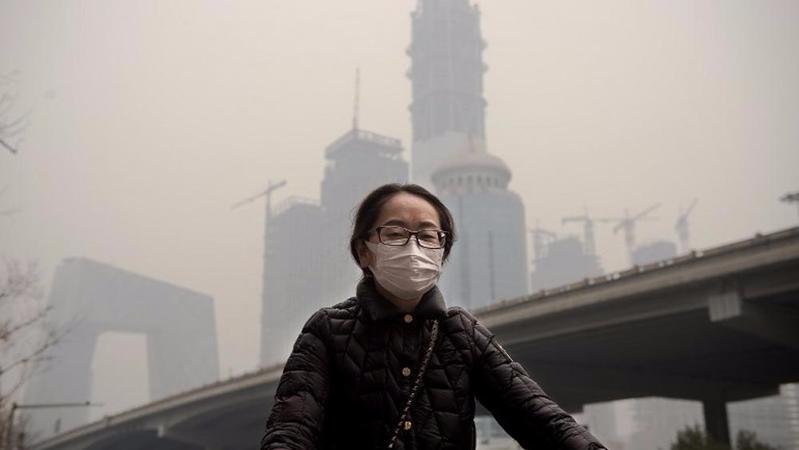 In this March 20, 2017 photo, a woman wearing a protective pollution mask rides a bicycle in Beijing, China. (NICOLAS ASFOURI / AFP)

More than 130,000 polluting companies in the Beijing-Tianjin-Hebei region have suspended production or shut down amid comprehensive controls to curb air pollution in the autumn and winter, environmental authorities said on Tuesday.

After blue skies over the weekend, the air quality in many cities of the region including Beijing, Tianjin, and Shijiazhuang, Tangshan and Baoding in Hebei province is forecast to decline to the moderate or even severe level on Wednesday and Thursday, according to the China National Environmental Monitoring Center.

More than 130,000 polluting companies in the Beijing-Tianjin-Hebei region have suspended production or shut down amid comprehensive controls to curb air pollution

It will once again improve, reaching the good level on Friday, it added.

In response to coping with frequent air pollution in the autumn and winter, environment authorities in Beijing, Tianjin and Hebei province, have pledged to continue strict controls and carry out extra measures to curb pollution.

"Hebei province has dealt with around 108,500 polluting companies, including closing them down or suspending their production in 2017," Gao Jianmin, head of the Hebei Provincial Environment Bureau, said on Tuesday.

Besides, 19,000 polluting companies were found in Tianjin, of which half were shut down completely, said Wen Wurui, Gao's counterpart in Tianjin.

Around 6,000 polluting companies were shut down in Beijing.

The three heads of the environment bureaus introduced their measures to tackle with winter smog, showing that coal consumption for heating services is another major target along with restrictions on industrial production.

In the downtown districts of Beijing and Tianjin, gas or electricity has replaced coal as the source of winter heating, and in Hebei more than 2 million households in urban and rural areas have switched their fuel as well, according to the three officials.

In Beijing, total coal consumption was reduced to 7 million metric tons in 2017, compared with 23 million tons in 2013, "and 90 percent of the current energy mix was high-quality energy including gas, greatly helping to reduce emissions," said Fang Li, head of Beijing Environmental Protection Bureau.

More companies in heavy industry will reduce their production to lower emissions in the region - for example, 396 major companies from the casting, iron and steel and construction sectors in Tianjin will do so from Wednesday, Wen said.

The comprehensive measures in the three areas resulted in an improvement in air quality, such as the average concentration of PM2.5, hazardous fine particulate matter, which declined in Tianjin from Oct 1 to 25 by 24 percent year-on-year, said Wen from Tianjin.

The Ministry of Environmental Protection has sent inspection teams to monitor the three governments to deal with pollution problems to improve regional air quality.