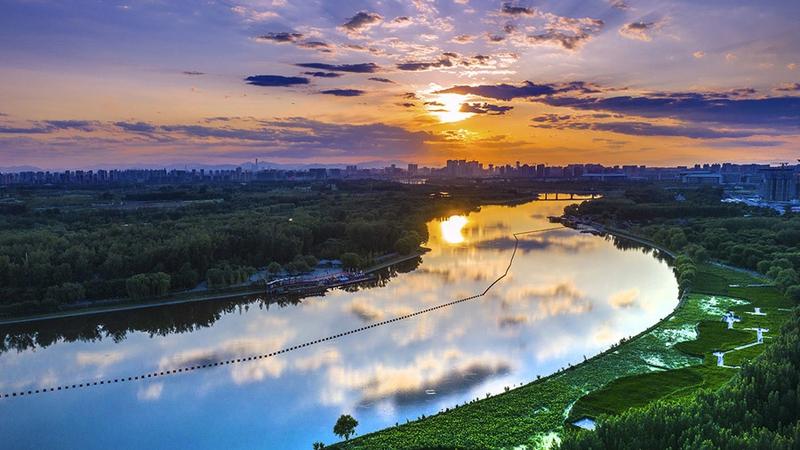 A picture of the Tongzhou district section of the Beijing-Hangzhou Grand Canal taken by photographer Ma Wenxiao in June. (PHOTO PROVIDED TO CHINA DAILY)

Photographer Ma Wenxiao has been recording Beijing's metamorphosis from the sky for the past 18 years, rediscovering the city's classical appeal accumulated over 3,000 years of history while documenting the capital as it grows bigger, higher and greener.

There was a period of rapid construction in the city as preparations for the 2008 Beijing Olympics got into full swing nearly two decades ago, and another wave of development began to usher in the 2022 Winter Games in Beijing and nearby Hebei province.

And it is hoped that the central axis - a 7.8-kilometer-long notional line along the city's historical center - will be included in UNESCO's list of intangible cultural heritage, even as it continues to extend to the north and south.

These radical transformations have all been captured by Ma's lens.

Every time he leans out of a helicopter, the rush of wind seems determined to pin him back. If he wasn't able to rest his feet on the footplate outside the aircraft, his legs would be blown around like blades of grass. 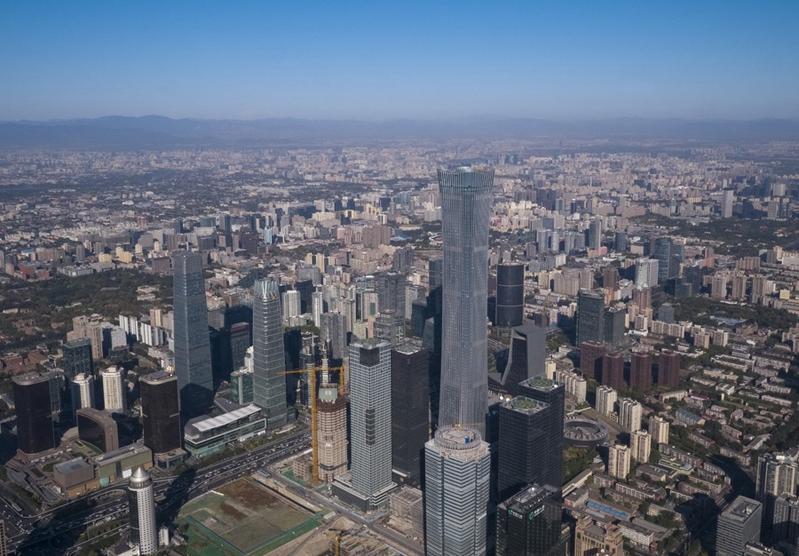 He usually has two safety belts attached to his body - one fitted to the aircraft and another he brings with him as a backup. He crouches slightly so that he can adjust the angle of his body more easily. The fear of falling is a constant companion, and a racing heart is just another part of the job.

The constant roar of the rotors leaves his head in a spin, and it takes a couple of weeks for the ringing in his ears to stop after each shoot.

To help him set up the camera, compose and seize the right moment, the helicopter has to hover over the subject repeatedly. A circular area of between 500 and 1,000 meters in diameter is needed for each pass to take a few shots.

Sometimes he feels so dizzy that he has to ask the pilot to make a temporary landing and take a rest before having another try.

But the end results are worth it. Using multiple cameras, he manages to take pictures from heights that few photographers have ever had the chance to attain. He has also started using drones in recent years.

Xun Yongli, a fellow shutterbug and a friend of Ma's for more than a decade, says Ma will try again and again regardless of time or cost to capture a satisfying image. When he's not on a shoot, he immerses himself in improving his photography skills and exploring the technical limits of the equipment that he spends most of his money on.

Ma Wenxiao leans out of a helicopter to take a photo. (PHOTO PROVIDED TO CHINA DAILY)

One of Ma's works revealed a garden-like old quarter northwest of the city center around Houhai Lake.

With modern skyscrapers and distant verdant mountains receding to the upper edges of the photo, this is an area where the trees are taller than the traditional hutong houses.

The trees line the lake and dot the old Beijing quadrangles with undulating gray-tiled rooftops.

In another related image, a verdant hue dominates the scene to transform the White Dagoba in Beihai Park and the Wanchun Pavilion in Jingshan Park into mere decorations - many viewers may never have realized there are such expanses of water and greenery in central Beijing.

Ma says there are more green areas and parks in the modern districts of the city outside of the historical hot spots, compared to when he started doing aerial photography.

By contrast, another work of Ma presents the CITIC Tower, also known as China Zun, Beijing's tallest skyscraper, in the central business district on the East Third Ring Road area. It was shot by Ma along with the nearby China World Trade Center Tower 3, Beijing's second-highest building which is some 200 meters lower. 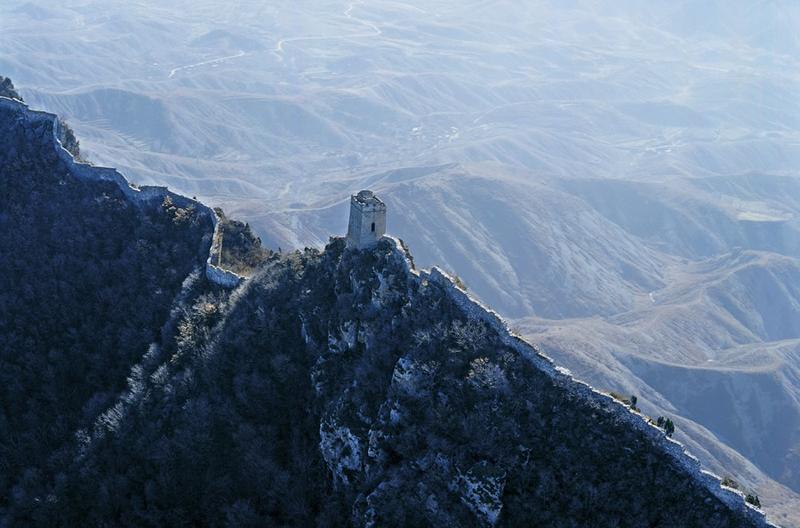 The Simatai section of the Great Wall Ma shot in 2005. (PHOTO PROVIDED TO CHINA DAILY)

The two landmarks are much taller than the surrounding buildings, making the horizontal image taken from the sky appear quite empty.

Ma has taken aerial pictures of the central axis on a few occasions, but his most impressive images were taken separately in 2013 using a large-format camera and in 2017 using a medium-format camera. These images appear in the media from time to time.

According to him, the presence of the central axis and the thought behind the historically symmetrical urban planning is very clear when viewed from 100 meters above.

Modern architecture like the well-known Bird's Nest (China's National Stadium), Water Cube (the National Aquatics Center), the Olympic Park Observation Tower and the Olympic Forest Park built in the north of the city and the recently opened new airport in the south have all inherited and expanded the urban planning philosophy of the central axis.

In terms of density, height and structure, the appearance of these new structures and the nearby landscaping seem harmonious with their surroundings when the central axis area is viewed as a whole and remain consistent with its cultural legacy - even if some of the buildings were once deemed controversial, Ma says.

The 59-year-old came to Beijing from his hometown in Henan province in 1978. As a member of the engineering corps, he worked on the construction of the Second Ring Road and the Jianguomen Overpass in particular, as well as subway lines and a renewal project for urban water systems. 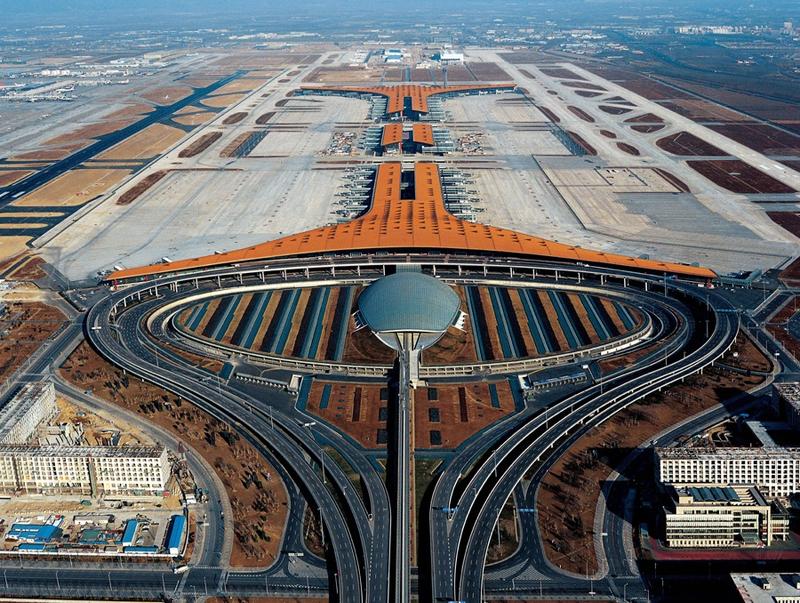 An aerial picture of Terminal 3 of the Beijing Capital International Airport taken in February 2008. (PHOTO PROVIDED TO CHINA DAILY)

In the early 2000s, he took up a publicity role for two major construction groups, and he came up with the idea of taking aerial photos from a helicopter, which later received the backing of the military, while he was looking for ways to present the progress made to the city's road infrastructure.

And a beltway extending more than 900 km that connects the capital with Tianjin and Hebei province - also known as the Seventh Ring Road or the G95 Highway - is now nearing completion.

According to media reports, the length of Beijing's operational highways reached 1,058 km by the end of 2018, almost the same distance as a flight from Beijing to Shanghai. In 1997, the capital's roads barely stretched to 150 km.

"I have now shot every part of the network of highways that have developed in the city over the past 18 years from the sky. We now have an integrated transport system that connects the urban districts with the suburbs and the nearby countryside," he says, adding that there were still many dead-end roads and narrow country lanes beyond the fourth and fifth ring roads at the turn of the century.