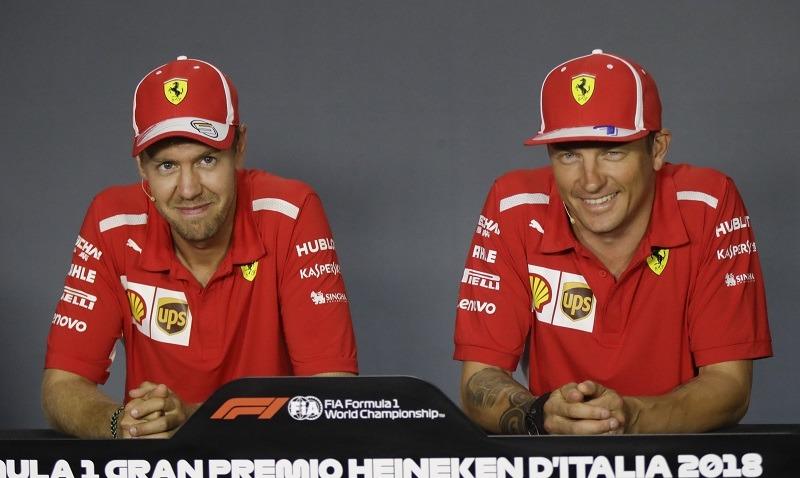 In this Aug 30, 2018 file photo, Ferrari driver Sebastian Vettel of Germany (left) is flanked by his teammate Kimi Raikkonen of Finland during a news conference at the Monza racetrack, in Monza, Italy. (LUCA BRUNO / AP PHOTO)

SINGAPORE - Sebastian Vettel needs a return to form at the Singapore Grand Prix, the night race where his Formula One championship challenge started crumbling last year.

Vettel was perfectly poised to regain the overall lead from Lewis Hamilton at the Marina Bay street circuit last year, but caused a multi-car crash from pole position and spiraled out of the race. Hamilton avoided the first-lap chaos and, despite starting fifth, went on to win.

The crash affected Vettel's momentum badly. Hamilton won two of the next three races and sealed the title by a comfortable 46 points.

It could be deja vu for the German driver as he already trails Hamilton by 30 points heading into Sunday's race. Hamilton has won three of the past four races and outscored Vettel 93-55 during that span.

Still, Vettel is confident he can turn the situation around - providing he keeps his composure.

"The biggest enemy is me. We have a great car," Vettel said on Thursday. "Obviously, (Hamilton) is ahead at the moment, the one to beat, but we have all the chances. We need to look after ourselves and if we do that we have a good chance to do well."

The sweltering heat and humidity makes for grueling driving on Singapore's sinewy street track - even late at night.

"I think it's the toughest race we have all year, mentally and physically," Vettel said. "You have a feeling you can never be prepared enough."

He will need to be on Sunday, given how many points he's thrown away this season.

Considering Hamilton has won six races to Vettel's five, the margin between them should be much closer. But, just like in 2017, Vettel has been throwing away points and his composure is again being called into question. 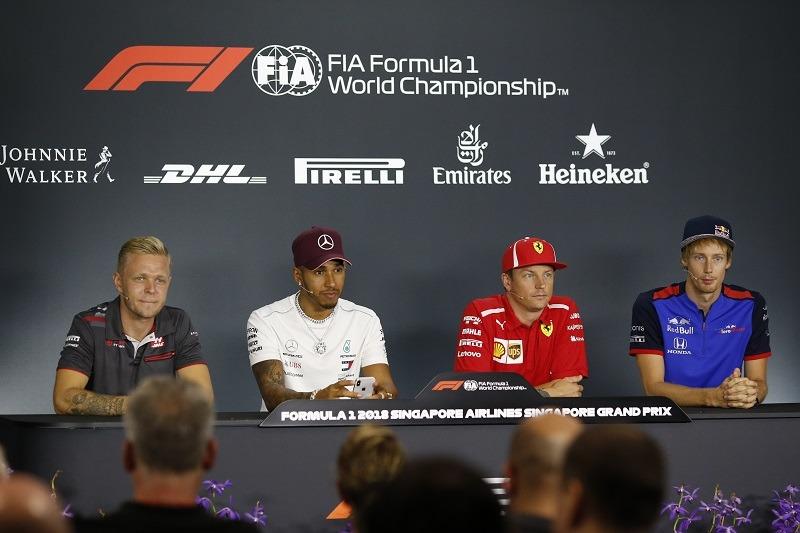 The slump started when the Ferrari driver crashed in the rain while leading the German GP in July, then botched qualifying - again in the rain - at Hungary despite being faster than Hamilton's Mercedes.

"For sure, the worst one was Germany," Vettel said. "(But) there's not much point trying to dig into the race again."

Although he beat Hamilton at the Belgian GP, after Hamilton took pole, familiar problems resurfaced for Vettel and Ferrari at the Italian GP two weeks ago.

Ferrari secured a front row 1-2, with Hamilton third, but Vettel was unhappy with his team because Kimi Raikkonen was on pole in Monza. Then, Raikkonen held his ground at the start and didn't let Vettel past, even though Vettel is much better placed for a title push.

Unable to pass, Vettel then got in a tangle as Hamilton was overtaking him and spun off the track. Vettel clawed back to fourth, but Hamilton won to extend his title lead on a track where Ferrari should have helped Vettel close the gap on the British driver.

The fact he did not also underlines how Ferrari has seemed in a state of flux at times. Given Vettel's need to pressure Hamilton, it was logical to impose team orders and tell Raikkonen to let Vettel past him.

Ferrari has never officially established a 1-2 hierarchy in the team, and neither has Mercedes. But it is seemingly evident to observers that Valtteri Bottas is Hamilton's No. 2 at Mercedes, and he drove like that in Monza to help Hamilton overtake Raikkonen.

"Valtteri's been in a position to help in different scenarios," Hamilton said.

The situation at Ferrari, however, is more confusing.

This was compounded this week when Ferrari chose not to extend Raikkonen's contract for next year and instead promoted 20-year-old Charles Leclerc from the Sauber team. Leclerc is a hugely promising driver who came through the prestigious Ferrari academy but he is inexperienced and will need time to adjust to a vastly more powerful car in 2019.

Raikkonen has been competitive with six podiums in the past seven races to reach 100 podiums overall. But the 38-year-old Finn is going to Sauber next year, back to where he started his F1 career in 2001 and a clear demotion in terms of prestige.