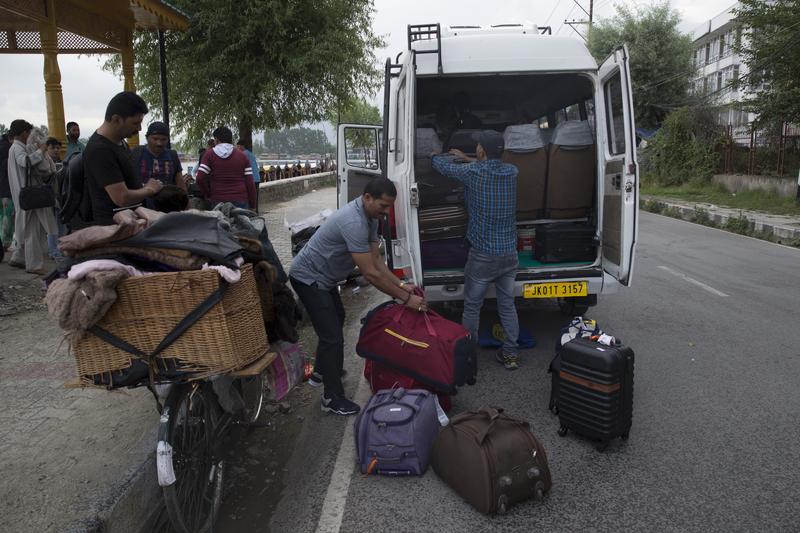 SRINAGAR, India — Tensions have soared along the volatile, highly militarized frontier between India and Pakistan in the disputed Himalayan region of Kashmir as India deployed more troops and ordered thousands of visitors out of the region.

Pakistan's military accused Indian forces of using banned cluster munitions to target the civilian population along the Line of Control in the Pakistani-controlled part of Kashmir, killing a 4-year-old boy & a woman

The frontier residents on the Pakistani side are either moving out to safer places or have begun construction of new bunkers with some strengthening existing shelters near their homes.

Thousands of Indian students and visitors were fleeing Indian-controlled Kashmir over the weekend after the government ordered tourists and Hindu pilgrims visiting a Himalayan cave shrine "to curtail their stay" in the disputed territory, citing security concerns.

Meanwhile, tensions flared along the highly militarized Line of Control that divides Kashmir between India and Pakistan as Pakistan accused India of using cluster munitions to target the civilian population, killing two people.

Hundreds of Indian and foreign visitors, including some Hindu pilgrims, on Saturday congregated outside the main terminal at the airport in Srinagar, the region's main city, seeking seats on flights out. Most were unlikely to get tickets, however, as authorities had yet to arrange additional flights, officials said.

The Indian air force flew 326 tourists out of Srinagar, the Press Trust of India news agency reported. Out of 11,301 tourists, only 1,652 remained on Saturday, PTI reported.

Tourists and pilgrims also took buses out of the region after authorities went to hotels in the tourist resorts of Pahalgam and Gulmarg on Friday evening telling them to leave. Authorities also bused out hundreds of Indian students from some colleges in Srinagar.

The order cited the "prevailing security situation" and the "latest intelligence inputs of terror threats with specific targeting" of the annual Hindu pilgrimage as reasons for the advisory. Several governments issued similar travel advisories.

On Thursday, officials suspended the pilgrimage for four days due to bad weather along the route. Over 300,000 people have visited the icy cave since July 1. 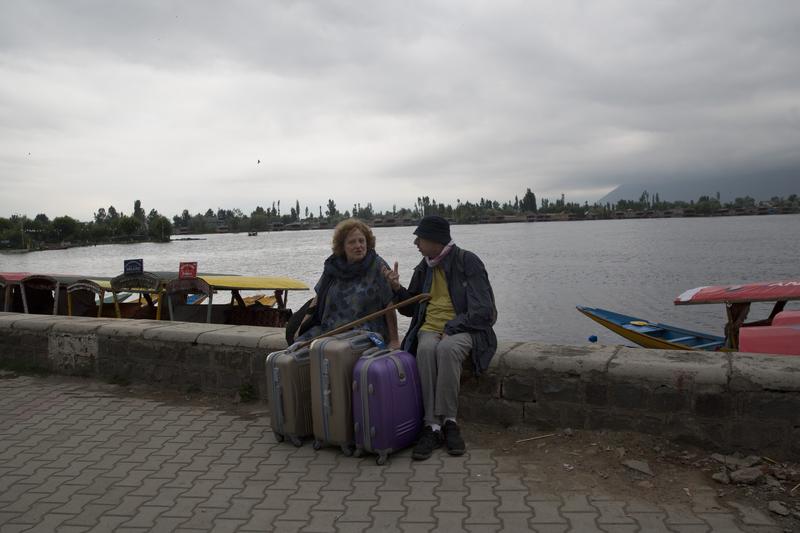 An Italian couple wait for their taxi as they prepare to leave Srinagar, Indian controlled Kashmir, Aug 3, 2019. (DAR YASIN / AP)

The evacuation order has intensified tensions following India's announcement that it was sending thousands of more troops to one of the world's most militarized areas, sparking fears in Kashmir that New Delhi was planning to scrap an Indian constitutional provision that forbids Indians from outside the region from buying land in the Muslim-majority territory.

In its election manifesto earlier this year, Prime Minister Narendra Modi's Hindu nationalist Bharatiya Janata Party promised to do away with special rights for Kashmiris under India's Constitution.

Rumors had swirled in the region on Friday, ranging from disarming of Kashmiri police forces to the Indian military taking over local police installations and schools being ordered closed, further ratcheting up tensions.

By Friday night, residents in Srinagar and other towns thronged grocery stores and medical shops to stock up on essentials. They lined up at ATMs to take out money and at gas stations to fill up their vehicles.

However, tensions eased on Saturday, though Kashmiri politicians and the public were eager to know what is to come.

Omar Abdullah, a pro-India Kashmiri leader who has criticized the Modi-led government's muscular approach in Kashmir, said New Delhi should clear the air in Kashmir.

Ordinary Kashmiris fear the government measures are a prelude to intensifying an ongoing crackdown against anti-India dissenters. Kashmir, a region known for lush green valleys, lakes, meadows and dense forested mountains, has become notorious for security lockdowns and crackdowns. 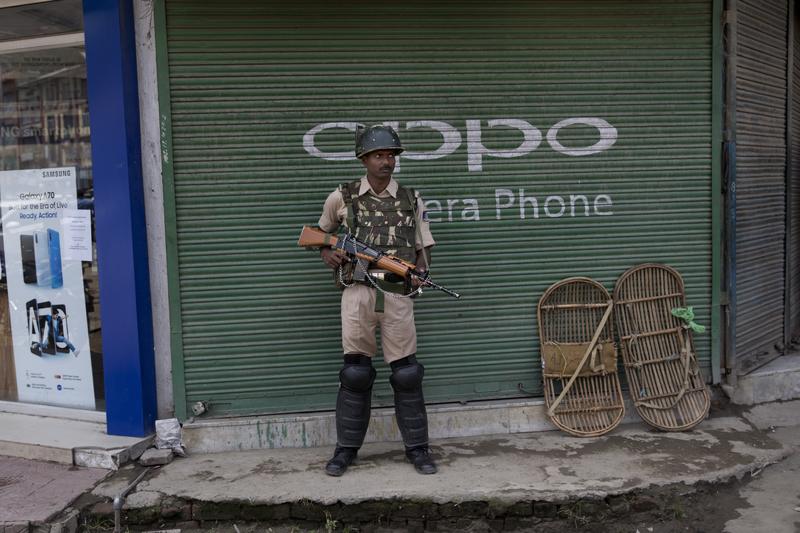 On Saturday, Pakistan's military accused Indian forces of using banned cluster munitions to target the civilian population along the Line of Control in the Pakistani-controlled part of Kashmir, killing a 4-year-old boy and a woman. It said another 11 villagers were critically wounded.

"This is violation of Geneva Convention and international humanitarian law," the military said in a statement. "This blatant Indian aggression against all international norms exposes true character of Indian Army and their moral standing."

The Indian army rejected the Pakistan claim. It said Indian soldiers killed five attackers while foiling an attempt by gunmen from Pakistan to target an Indian post.

Indian responses are only against military targets and "infiltrating terrorists who are aided by Pakistan army," another statement by the Indian army said.

As tension escalated between the two sides, authorities in Pakistan-held Kashmir ordered evacuation of thousands of residents along the frontier. They also asked residents to remain vigilant of "toy bombs" fired by India.

Pakistani Foreign Ministry urged India to act "responsibly" and "work toward preserving rather than imperiling peace and security in South Asia." 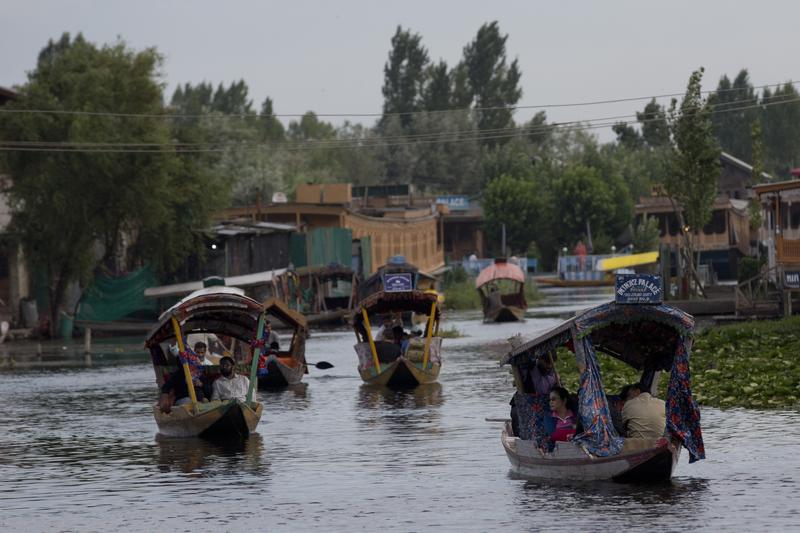 Kashmir is divided between India and Pakistan and each claims the divided Himalayan territory in its entirety. Rebels have been fighting Indian control since 1989. Most Kashmiris support the rebels' demand that the territory be united either under Pakistani rule or as an independent country, while also participating in civilian street protests against Indian control.

About 70,000 people have been killed in the uprising and the ensuing Indian crackdown.