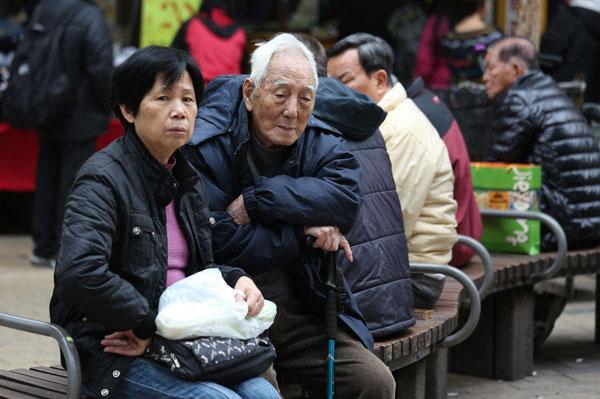 Hong Kong's population is projected to increase from 7.34 million in mid-2016 to a peak of 8.22 million in mid-2043, according to Census and Statistics Department. (PARKER ZHENG / CHINA DAILY)

HONG KONG - Hong Kong’s population continues to age quickly with one in every three people expected to be older than 65 in 2066, according to the government’s latest population projection announced on Friday.

The new population projection also showed the gender imbalance will increase as the population continues to grow and age, leaving one in every three women in Hong Kong single in 2066, twice as high as last year when just one in seven remained unwed.

The imbalance contributed to women from Hong Kong seeking to tie the knot with men on the mainland. Hong Kong women marrying men from the mainland accounted for 30 percent of cross-boundary marriages last year, up from just 4 percent in 1986.

Hong Kong women marrying men from the mainland accounted for 30 percent of cross-boundary marriages last year, up from just 4 percent in 1986

The Census and Statistics Department said Hong Kong will be an even more cramped city in coming decades, as the population is forecast to peak at 8.22 million in 2043, with growth attributed to the rapidly swelling cohort of elderly residents, which will double to about 31 percent of the population from 16.5 percent this year.

The decline of population after reaching its peak in 2043 will largely be caused by a significantly higher death rate among the elderly population and a low fertility rate, said Marion Chan Shui-yu, deputy commissioner of the C&SD.

“The swiftly aging population has been a long-term challenge facing Hong Kong society. It is about to trigger a set of accompanying social and economic issues,” she added.

The department will submit the figures for the Steering Committee on Population Policy to help the government formulate future public policy.

As gray-haired residents age, the labor force in the city, excluding foreign domestic helpers, is expected to slip from 3.62 million last year to 3.31 million in 2066.

Considering a decline in the number of working-age people, aged between 15 and 64, tends to slow down the economy, Chan suggested the situation might be alleviated by encouraging gray-haired residents to return to the labor force.

“The aging population will enter its most rapid growth in the coming 20 years,” said Chan. “The society should get prepared to confront such demographic challenges.”