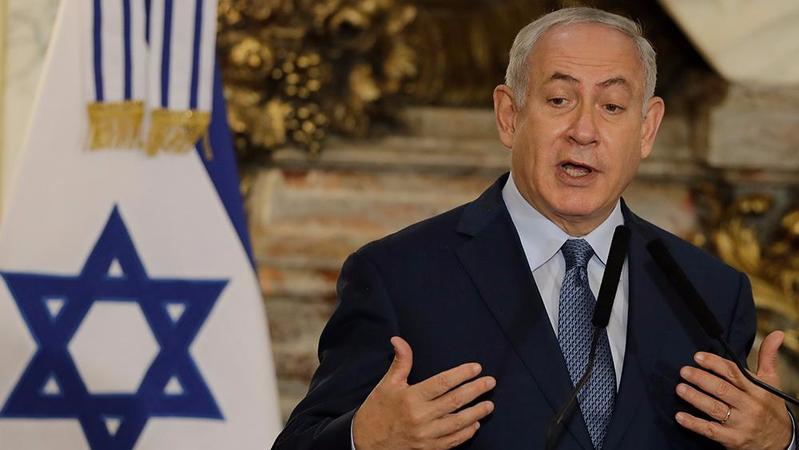 JERUSALEM - Israel on Wednesday was fumed over a vote by the Interpol that approved the Palestinian National Authority (PNA) as a member in the international police body.

Earlier in the day, Palestinian membership to the Interpol was approved by 74 to 24 votes, exceeding the two-thirds requirement of the yes-to-no ratio.

The decision was made despite Israel's diplomatic campaign to thwart the vote.

Israeli Prime Minister Benjamin Netanyahu denounced the approval. In a meeting in Jerusalem with US President Donald Trump's special envoy Jason Greenblatt, and US Ambassador to Israel David Friedman, Netanyahu charged that the resolution "violates signed agreements with Israel."

Netanyahu said the actions of the Palestinian leadership in recent days severely impairs the chances of achieving peace and added that the Palestinian diplomatic warfare would not go unanswered, according to a statement released on his behalf.

Israel's Minister of Environmental Protection, Zeev Elkin, who is also a close ally of Netanyahu, said Israel should "cancel gestures granted to the Palestinians," including work permits in Israel, and special travel permits for Palestinian leaders.

Former Israeli Prime Minister Ehud Barak condemned it as "yet another failure" for Netanyahu.

The PNA applauded the approval. "This victory was realized because the majority of the Interpol members defended the raisons d'etre of the organization and basic principles," said Palestinian Foreign Affairs and Expatriates Minister Riad Malki.

He added that the approval reflects the trust of the international community in Palestine's capabilities.

"Palestine will commit to obligations and contribute to combating crime and law enforcement on the international level," Malki noted.

The move was part of the Palestinian campaign to gain international diplomatic recognition as a state.

Established in 1923, Interpol is the world's largest police organization aimed to struggle crime and terrorism. Currently, it has 192 members after the admission of Solomon Islands and Palestine on Wednesday.

REMOVAL OF ISRAELI SETTLEMENT FROM WEST BANK RULED OUT

The Israeli prime minister also vowed never to remove Israeli settlement from the West Bank, even in case of a possible deal with the Palestinians.

Netanyahu's remarks were made during a controversial ceremony in the settlement of Kfar Etzion to mark 50 years anniversary of the settlements, which are located on lands seized by Israel in the 1967 Middle East war.

"There will be no more uprooting of settlements in the Land of Israel," he told the audience, which was composed of right-wing settlers as well as cabinet ministers.

"Even when we removed settlements, we received missiles," he added, referring to Israel's withdrawal from the Gaza Strip in the 2005 "Disengagement Plan."

Also at the ceremony, Education Minister Naftali Bennett, who is also the leader of the pro-settler Jewish Home party, called on the government to annex the West Bank. "It is time to impose (Israeli) sovereignty upon our good land ... There is no better time for this, it is clear to everyone that we are rightfully here," he said.

Dozens of activists with Peace Now, a human rights group, protested outside the settlement where the ceremony was held. They held signs saying the settlements are ruining Israel and hurting any chance for peace.

Earlier this week, Peace Now launched a campaign against the ceremony and sent letters to all opposition members of the parliament, calling them not to attend the event.

The settlements are located on lands seized by Israel in the 1967 Middle East war and they are illegal under international law.

The international community and the United States support a two-state solution to the Israeli-Palestinian conflict, with the establishment of a Palestinian state in the pre-1967 lands.

The international community has repeatedly warned Israel that the settlements are a major hurdle for peace as they are located on lands where the Palestinians wish to build their future state.

In his landmark 2009 Bar Ilan speech at Bar Ilan University outside Tel Aviv, Netanyahu pledged his support to a two-state solution based on a territorial compromised.

He withdrew his support for Palestinian statehood during his re-election campaign in 2015, in a last-minute attempt to draw more votes. He backtracked on this statement after winning the elections.