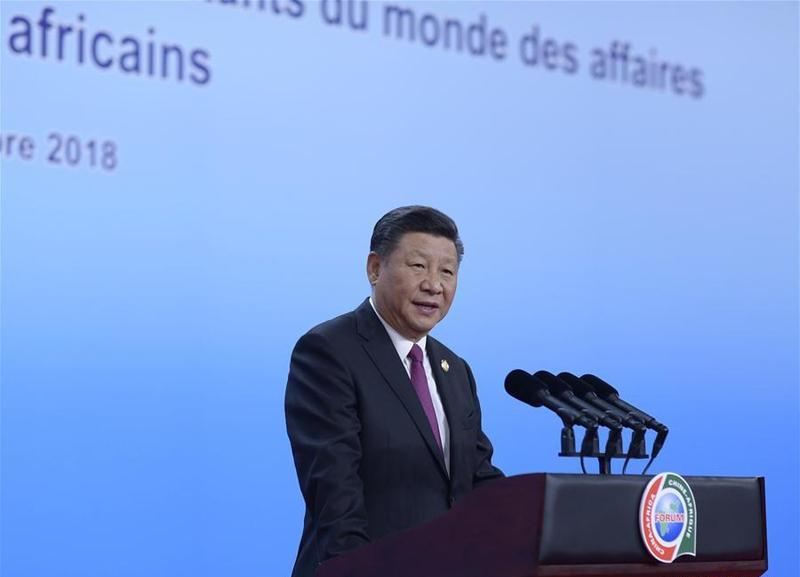 Chinese President Xi Jinping delivers a keynote speech themed "walk together towards prosperity" at the opening ceremony of the High-level Dialogue between Chinese and African Leaders and Business Representatives as well as the Sixth Conference of Chinese and African Entrepreneurs in Beijing, China, Sept 3, 2018. (LI XUEREN / XINHUA)

BEIJING – Chinese President Xi Jinping said Monday that China and Africa have embarked on a distinctive path of win-win cooperation.

Xi made the statement in a keynote speech delivered at the opening ceremony of the 2018 Beijing Summit of the Forum on China-Africa Cooperation (FOCAC).

The summit opened on Monday afternoon.

No one could hold back the Chinese people or the African people as we march toward rejuvenation.

The Chinese leader said Africa's development has great potential and the continent is full of hope. China-Africa friendship and cooperation have broad vistas, and China and Africa can forge an even stronger comprehensive strategic and cooperative partnership.

China values sincerity, friendship and equality in pursuing cooperation. The over 1.3 billion Chinese people have been with the over 1.2 billion African people in pursuing a shared future, he said.

President Xi said China will exempt certain African countries from outstanding debts incurred in the form of interest-free Chinese government loans due by the end of 2018.

The exemption will be granted to Africa's least developed countries, heavily indebted and poor countries, landlocked and small island developing countries that have diplomatic relations with China, Xi said in his keynote speech.

China will implement eight major initiatives with African countries over the next three years and beyond in areas such as industrial promotion, infrastructure connectivity, trade facilitation, and green development, he said.

"No one could undermine the great unity between the Chinese people and the African people."

China pursues common interests and puts friendship first in cooperation. China believes the sure way to boost China-Africa cooperation is for both sides to leverage their respective strengths and for China to complement Africa's development through its own growth, and for both sides to pursue win-win cooperation and common development, Xi said. "No one could hold back the Chinese people or the African people as we march toward rejuvenation."

"No one could, out of their imagination or assumption, deny the remarkable achievements made in China-Africa cooperation."

COMMUNITY WITH A SHARED FUTURE

Xi called for the building of a China-Africa community with a shared future that assumes joint responsibility, pursues win-win cooperation, delivers happiness for all, enjoys cultural prosperity, ensures common security, and promotes harmony between man and nature. 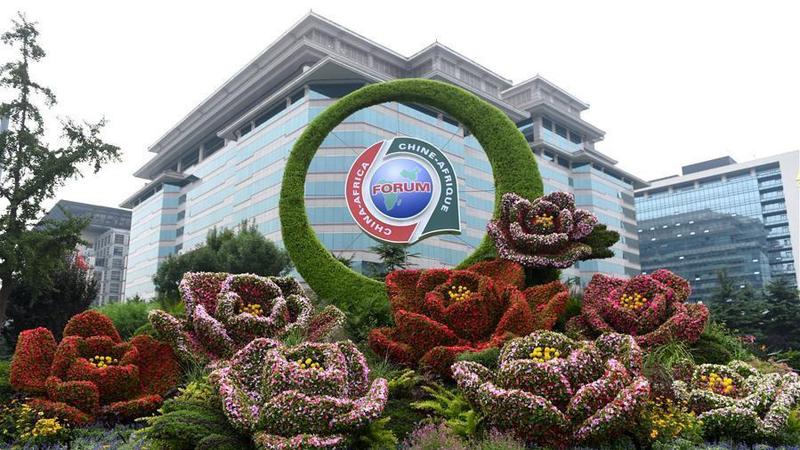 This photo taken on Aug 28, 2018 shows a parterre to greet the 2018 Beijing summit of the Forum on China-Africa Cooperation (FOCAC) in Beijing, capital of China. (LUO XIAOGUANG / XINHUA)

Xi called for the alignment of the Belt and Road construction with the implementation of the African Union's Agenda 2063 and the United Nations' 2030 Agenda for Sustainable Development as well as the development strategies of various African countries.

The two sides should make the enhancing of people's livelihoods the foundation of developing China-Africa relationship, Xi said, adding that China will do more to help Africa alleviate poverty, increase employment and income, and better the lives of its people.

China champions a new vision of security featuring common, comprehensive, cooperative and sustainable security, and will firmly support African countries and the African Union as well as other regional organizations in Africa in solving African issues in the African way, said Xi.

Xi said China will strengthen exchange and cooperation with Africa on climate change, clean energy, prevention and control of desertification and soil erosion, as well as the protection of wild animals and plants.

China has honored its 2015 promise to provide Africa with funding support totaling US$60 billion, Chinese President Xi Jinping said Monday at the opening ceremony of the 2018 Beijing Summit of the Forum on China-Africa Cooperation (FOCAC).

The financing has been either delivered or arranged, Xi said.

China decided to provide the funding support at the FOCAC Johannesburg summit to ensure the successful implementation of ten China-Africa cooperation plans adopted at the summit.

Reiterating China’s commitments to peace and development, Xi Jinping said: "China takes it as its mission to make new and even greater contribution to mankind.”

“We firmly believe that peace and development are the theme and the call of the times," Xi said, urging the international community to respond to that call with solidarity, wisdom, courage and a sense of mission.

Facing uncertainty and unpredictability in global growth, China will remain committed to opening-up and grow an open economy for win-win cooperation, he said.

"Anyone who isolates himself on an island has no future.”