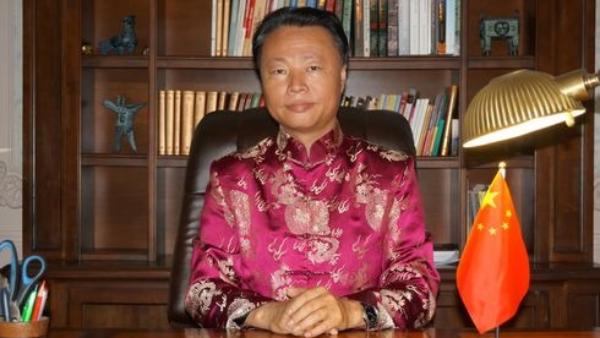 This undated photo taken from the official website of the foreign ministry of the People's Republic of China shows Chinese Ambassador to the Philippines Zhao Jianhua.

MANILA — The military-to-military relationship between China and the Philippines has become an important part of the bilateral relations, Chinese Ambassador to the Philippines Zhao Jianhua said on Monday.

"China-Philippines relations have achieved positive turnaround, consolidation and elevation over the past three years, and have entered a new stage of development," Zhao said in a speech at a reception marking the 92nd anniversary of the founding of the People's Liberation Army (PLA) of China.

In April 2019, the Philippine Navy sent its amphibious warfare ship BRP Tarlac to participate in the international fleet review during the 70th anniversary celebration of PLA Navy in Qingdao, China

"We have increased contacts and exchanges," he said, referring to the series of recent military exchanges made by both countries.

In January 2019, the Chinese naval escort fleet, composed of three vessels, paid a five-day friendly visit to the Philippines, he said.

In April 2019, the Philippine Navy sent its amphibious warfare ship BRP Tarlac to participate in the international fleet review during the 70th anniversary celebration of PLA Navy in Qingdao, China, he added.

He further said that members of the Command and General Staff College students of the Armed Forces of the Philippines (AFP) just concluded their educational and cultural tour in China recently.

As a result of the concerted efforts of China, the Philippines and other countries in the region, the situation in the South China Sea "has been stabilized in general, with growing momentum for cooperation and increasing positive factors," Zhao said, adding that China stays committed to peace and stability in the South China Sea.

For his part, Philippine Defense Secretary Delfin Lorenzana said at the reception that the Philippines is also "committed to the resolution of disputes through peaceful means."

Lorenzana added that he is looking forward to "more shared endeavors, mutually productive and beneficial cooperation and partnership agreements" with China "to create understanding and friendship between our two nations."