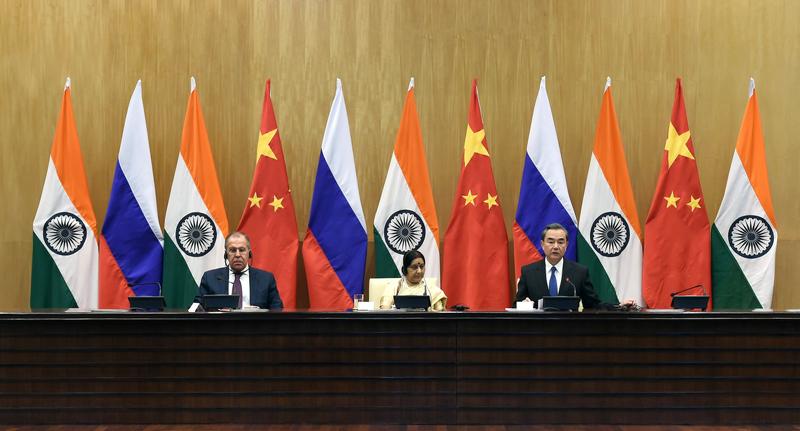 China, Russia and India agreed to maintain regional security and economic architecture in the Asia-Pacific, according to a joint statement issued on Monday after the 15th trilateral meeting of the foreign ministers of the three countries.

Maintaining regional security and economic architecture that is "open, inclusive and based on multilateralism and universally recognized principles of international law" is imperative for lasting peace and stability in the region, the statement said.

The three countries emphasized the need for coordination and cooperation in various regional forums and organizations such as the East Asia Summit to maintain regional peace and stability and to promote regional development and prosperity.

During the one-day meeting, Foreign Minister Wang Yi, his Russian counterpart Sergei Lavrov and Indian counterpart Sushma Swaraj discussed a wide range of global and regional issues of common concern, according to the statement.

The three countries reiterated the importance they attached to cooperation and strategic partnership within BRICS.

"We will work together to implement all outcomes of BRICS summits to strengthen cooperation in economic, political, security and people-to-people fields, so as to usher in the second golden decade of BRICS cooperation," said the statement, while commending the China's successful hosting of the Ninth BRICS Summit in Xiamen in September.

The three countries also attached special importance to the joint work within the Shanghai Cooperation Organization, saying the SCO is an important instrument in promoting multilateral political, security, economic and people-to-people interaction in the region.

Describing the Russia-India-China trilateral format as a platform to foster closer dialogue and practical cooperation in identified areas among the three countries, the joint statement said such cooperation is not directed against any other country.

"We wish to strengthen the trilateral dialogue for consultation and coordination on regional and global issues of mutual interest in the spirit of mutual understanding and trust," it said.

"Our cooperation is conducive to maintaining international and regional peace and stability, and promoting global economic growth and prosperity," it added.