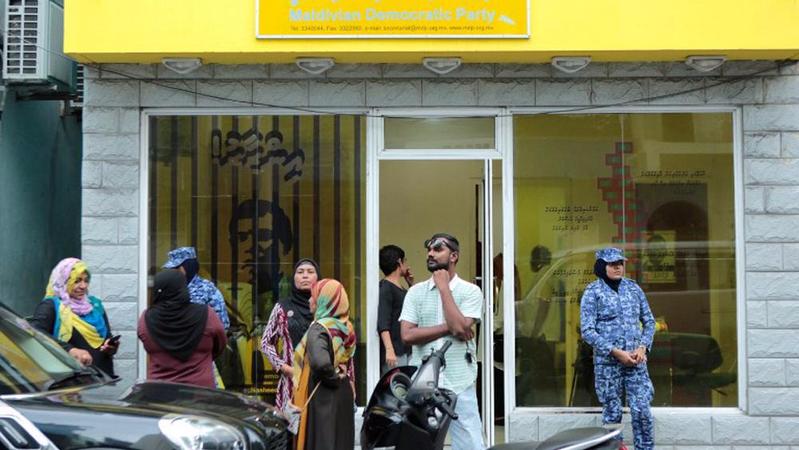 Police raid the Maldivian Democratic Party office after party members took part in a protest outside parliament in Male on March 27, 2017. The party said on July 24, 2017 that the military locked down parliament on Monday on Maldives’ president’s order as part of an attempt to prevent lawmakers from taking part in a vote to impeach the parliamentary speaker. (STR / AFP)

COLOMBO, Sri Lanka — The Maldivian opposition said that the military locked down parliament on Monday on the orders of the country's president in a bid to prevent lawmakers from taking part in a vote to impeach the parliamentary speaker.

The main opposition Maldivian Democratic Party said that on the orders of President Yameen Abdul Gayoom, the gates of the parliament were padlocked by members of the armed forces on Monday morning and lawmakers "were forcibly prevented from entering the parliamentary compound."

In a statement, the opposition party called Yameen's action "desperate, illegal and unconstitutional."

There was no immediate comment from the government. The government spokesmen could not be reached by telephone.

A no-confidence motion against Speaker Abdulla Maseeh Mohamed was scheduled to be taken up on Monday. The opposition says the motion has gained the support of 45 lawmakers in the 85-member house. However, an uncertainty arose when the election commission announced last week that the four members who supported the motion had lost their seats because they left the ruling party.

The motion was considered a severe blow to Yameen, whose control over parliament was threatened by a new understanding between the Maldives' former strongman and its first democratically elected president, Mohamed Nasheed. The Maldivian Democratic Party routed Yameen's party in local council elections earlier this year.

A similar opposition bid to oust the speaker was thwarted in March when the government defeated it by 48 votes, with none opposing. At the time, opposition lawmakers were either evicted or walked out from a vote on ousting the speaker following a dispute over problems with the electronic voting system.

The coalition's plan to wrest the parliamentary majority was aimed at reforming the judiciary, elections commission and other bodies perceived as being partial toward Yameen.

In March, Nasheed and former strongman Maumoon Abdul Gayoom and two other parties signed an agreement to form an opposition alliance.

Maumoon runs a rival faction within the Progressive Party of Maldives, which is led by the current president, his half-brother.

Nasheed was jailed in 2015 for 13 years for ordering the arrest of a senior judge when he was president in 2012.

However, he traveled to Britain last year on medical leave and received asylum there. Three other leading politicians have also been jailed after trials criticized internationally for a lack of due process. Yameen is accused of rolling back many of the democratic gains since the Maldives became a multiparty democracy in 2008.