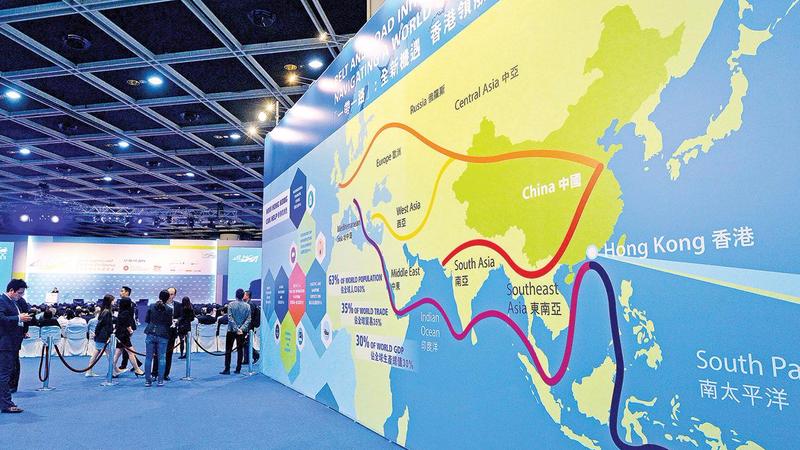 Hong Kong’s interconnectivity with the Chinese mainland has provided the city abundant opportunities in the past two decades. The city is poised to occupy a special seat on the nation’s connection with the rest of the world in the light of the ambitious Belt and Road Initiative. (Provided to China Daily)

She stressed the city’s traditional role as “super-connector” between the Chinese mainland and rest of the world.

“Cooperation under the B&R Initiative represents the trend of future development and involves numerous large-scale infrastructure projects, providing a vast market for us,” Choi said.

As a key link along the B&R, Hong Kong should take advantage of its experience in finance, trade, law and logistics to collaborate with mainland companies, she said.

The Belt and Road Office was founded by Chief Executive Leung Chun-ying in August last year. It aims to collaborate with relevant policy bureaus and provide advice on policies concerning B&R cooperation. The commissioner reports directly to the Chief Executive.

Echoing Leung, Choi said Hong Kong and the mainland should “combine their ships and sail out together”.

“We’ve always attached great importance to our interconnectivity with the mainland,” she said. Choi noted that it was also their task to establish cooperative mechanisms with mainland organizations and companies.

“We hope to become a coordinator effectively connecting local companies and talents with those on the mainland,” she ventured.

“Construction under the initiative makes increasing demands on fundraising. Many projects involve large-scale investment and some big enterprises are reluctant to invest independently because of financial risks. This emphasizes the necessity of collaboration and cooperation between us,” Choi said.

Hong Kong had grasped opportunities from the nation’s reforms and opening-up in the 1980s and transformed its manufacturing-dominated economy into the current services-dominated one.

“As a ‘super-connector’, we’ve always occupied a special seat on the country’s connection with the rest of the world,” she explained.

“And now, facing a new growth chapter under the B&R Initiative, the question for us is about how to make the pie bigger and get aboard with a more positive role,” Choi said.

She also believes Hong Kong can use its traditional and unique advantage as an international financial center to provide professional services for fundraising along the B&R.

“We have international financial talents who are experienced in fundraising, asset management and cross-boundary transactions. We are also the world’s biggest offshore yuan center,” Choi stressed.

The B&R Initiative is an open and inclusive concept and involves a very large area. And it welcomes any country and region that shows an interest in joining, Choi noted.

“Mainland companies have a very broad overseas network. This could provide us a great opportunity to explore markets in Central Asia, the Middle East and Africa,” she said.