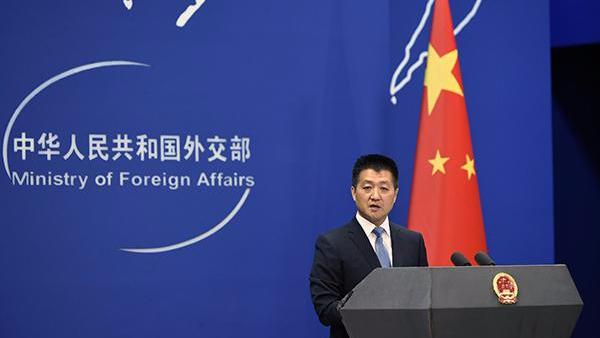 BEIJING - China on Thursday voiced strong protest against a US Navy warship passing close to the Meiji Reef in the South China Sea.

China is resolute in its determination to maintain sovereignty, security and maritime interests

"The USS Dewey illegally entered the waters near the island on early Thursday without permission of the Chinese government," said Chinese Foreign Ministry spokesperson Lu Kang at a press briefing.

"Such moves have undermined China's sovereignty and security, and were very likely to cause unexpected air and sea accidents."

The Chinese navy identified the US warship, warned and expelled it, Lu said.

"China has indisputable sovereignty of the Nansha Islands and its adjacent waters. China always respects and maintains the freedom of navigation and overflight of various countries in the South China Sea in accordance with international law," Lu said. "However, we firmly oppose any country damaging China's sovereignty and security in the name of navigation and overflight freedom."

Lu said the situation in the South China Sea has improved and shown positive development momentum, adding that the US acts have severely disrupted negotiations between all parties concerned.

"China is resolute in its determination to maintain sovereignty, security and maritime interests," he said, urging the US side to correct its mistakes, stop provocation and not harm regional peace and stability as well as China-US cooperation.

Also on Thursday, Ren Guoqiang, spokesperson for the Ministry of National Defense, said that guided-missile destroyer USS Dewey sailed into the waters close to the reefs off China's Nansha Islands without permission from China, and Chinese missile frigates Liuzhou and Luzhou "warned and expelled" the US ship after identifying it.

China has indisputable sovereignty over the Nansha Islands and waters surrounding them, Ren said.

"The US acts, aimed at showing off military power and pushing regional militarization, could have easily caused sea and air accidents," Ren said, adding the Chinese military had lodged solemn representations over the incident to the US side.

The South China Sea situation is developing toward a stable and positive trend under efforts from China and countries of the Association of Southeast Asian Nations, according to Ren.

"The wrong acts of the US have damaged this trend, doing no good for peace and stability in the South China Sea," he said. Currently, China-US relations are at a key period of development. It accords with the common benefits of the two countries and needs joint efforts from both sides to create healthy and stable China-U.S. relations.

"We urge the US side to take concrete measures and correct the mistakes to contribute 'positive energy' to the development of bilateral relations," Ren said.

"Any wrong actions by the US military will do nothing but spur the Chinese military to strengthen capabilities to safeguard national sovereignty and security," he said.