Irishman set to lead EU trade talks with UK, US 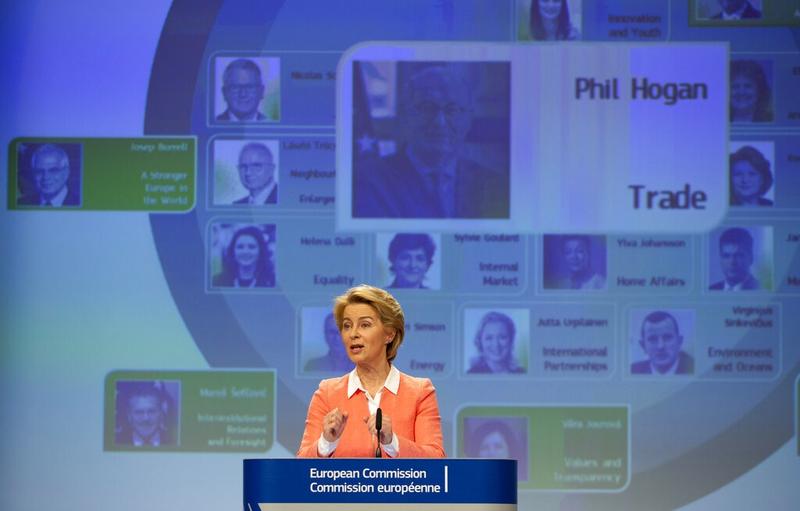 BRUSSELS — The incoming president of the European Union's powerful executive arm on Tuesday nominated Irishman Phil Hogan to lead future EU trade talks, which could put him in charge of negotiations with Britain after Brexit.

Hogan, whose country is set to be hit hard economically by Brexit, would also lead talks with the United States at a time of deep trans-Atlantic trade tensions. His name was among 25 new commissioners set to take up their posts in November.

Margrethe Vestager, who has angered the Trump administration by imposing hefty anti-trust fines on big US tech firms, is set to retain her job as competition chief. And in what appears to be a major concession to debt-burdened Italy, former prime minister Paolo Gentiloni was offered the job of economy commissioner.

"I think the trade commissioner, who will have to deal with the future trade agreement we will be negotiating (with Britain), is an excellent choice," European Commission president-elect Ursula von der Leyen told reporters as she unveiled her new team of policy commissioners.

Phil Hogan's appointment as EU Trade Commissioner is a very positive development for Ireland. We sought a major economic brief in the new European Commission, and I am very satisfied that we have secured it

"He is known as a hard and a fair negotiator," she said.

The commission negotiates trade agreements with other countries and blocs on behalf of the 28 EU member countries. Once Britain leaves — Brexit is currently scheduled for Oct 31 — London would face the long and arduous task of drawing up new trade relations with its European partners.

Hogan will join forces with former Brexit deputy negotiator Sabine Weyand, who was in June appointed head of the commission's trade directorate.

Hogan, who is currently serving as agriculture commissioner, said via Twitter that he was "very pleased" with the nomination. "This is undoubtedly one of the most important economic portfolios" at the commission and "the appointment comes at a very important time for the European Union."

In a tweet after the announcement, Irish Prime Minister Leo Varadkar said: "Phil Hogan's appointment as EU Trade Commissioner is a very positive development for Ireland. We sought a major economic brief in the new European Commission, and I am very satisfied that we have secured it."

Von der Leyen's new team is due to take up their jobs on Nov 1, once they have been vetted by the European Parliament.

Hogan will also lead trade talks with the United States amid deep tensions over US President Donald Trump's decision to impose tariffs on the Europeans.

Trump administration officials have accused the current European commission team of dragging its feet in talks on a new, limited, trade agreement. But the EU team, led by Cecilia Malmstrom, insists the ball is the US court.

Trump has also been angered by the EU's aggressive moves to crack down on market abuse by major companies, particularly U.S. tech companies, which have led to billions of dollars in fines on the likes of Google and Microsoft. But not only does current competition commissioner, Vestager, retain her portfolio — she receives extra clout in a promotion that would see her become a commission Executive Vice-President.

Gentiloni's appointment as economy commissioner comes after the government in Rome narrowly avoided legal action this year over its massive public debt. Italy's previous populist administration was widely critical of the commission, accusing it of imposing economic policy on the country that was stifling growth.

The migration portfolio, currently held by Greece's Dmitris Avramopoulos, will soon be shared between two commissioners: Greek politician Margaritis Schinas — to become a vice-president with the Orwellian-sounding brief "Protecting our European Way of Life" — and Sweden's Ylva Johansson who is set to become the new home affairs commissioner.