Guangxi to boost ties with HK, other Bay Area cities 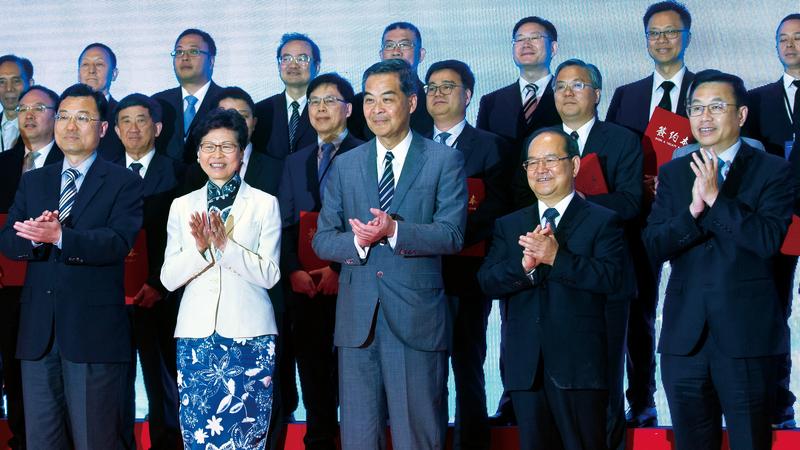 HONG KONG - The Guangxi Zhuang autonomous region, in South China with unique geographic advantages, is seeking to elevate its level of cooperation with the Hong Kong Special Administrative Region and align its development with that of the Guangdong-Hong Kong-Macao Greater Bay Area.

“Guangxi and Hong Kong have golden opportunities for development as the two parties share complementary strategies of development and have much room for cooperation,” said Lu Xinshe, Party secretary of Guangxi, during the Presentation on Guangxi Integrating the Guangdong-Hong Kong-Macao Greater Bay Area-Hong Kong 2019 in Hong Kong on Wednesday.

Hong Kong Chief Executive Carrie Lam Cheng Yuet-ngor, who also spoke at the conference, said the event marks the active participation of Guangxi to grasp opportunities brought by the Bay Area and to deepen its economic and trade cooperation with the Bay Area city cluster.

Guangxi and Hong Kong have golden opportunities for development as the two parties share complementary strategies of development and have much room for cooperation.

She noted the existing in-depth cooperation between the two regions in trade, tourism, construction, financial services, transportation, logistics and youth development, and encouraged more Hong Kong enterprises to explore business opportunities in Guangxi, which is contiguous with Guangdong and west to the province.

Lu said Hong Kong is actively playing the role as a “super connector” to integrate into national development, while Guangxi is focusing on a development strategy “to build a magnificent and beautiful Guangxi, to jointly fulfill the Chinese dream of rejuvenation”.

He said the outline development plan for the Bay Area has injected momentum to the region’s development and extended its influence to neighboring provincial-level areas, a development that has brought Guangxi new opportunities.

Guangxi is stepping up efforts to create a new landscape of all-around opening-up and development featuring “southward development, northward connection, eastward integration and westward combination”, and to accelerate its pace of integrating into the development of the Bay Area on all fronts.

Guangxi Vice-Governor Yang Jinbai spoke on the investment climate and development of the region. He highlighted Guangxi’s dominance in several areas, including its unique strategic geographical location that makes it the only provincial-level region connected to Association of South East Asian Nations (ASEAN) countries by both land and sea. It’s also the direct recipient of the influence brought by the Bay Area.

As an autonomous region, Guangxi has enjoyed multiple policy dividends, with many open platforms and well-developed transportation. The abundant natural resources and ecological advantages offer the region a natural edge to take part in the green development in the Bay Area.

Lam also stressed the cooperation opportunities between Guangxi and Hong Kong under the development of the Belt and Road Initiative, as Guangxi is well-positioned as an international gateway to ASEAN and a critical link to the 21st Century Maritime Silk Road and the Silk Road Economic Belt.

“Hong Kong has been the major source of overseas investment to Guangxi for years and also the region’s second-largest trading partner,” Lam said.

As of March, over 6,900 Hong Kong enterprises had invested and set up businesses in Guangxi with contractual capital of US$28 billion and the paid-in investment of about US$9 billion — the source with the largest overseas investment in Guangxi, she added.