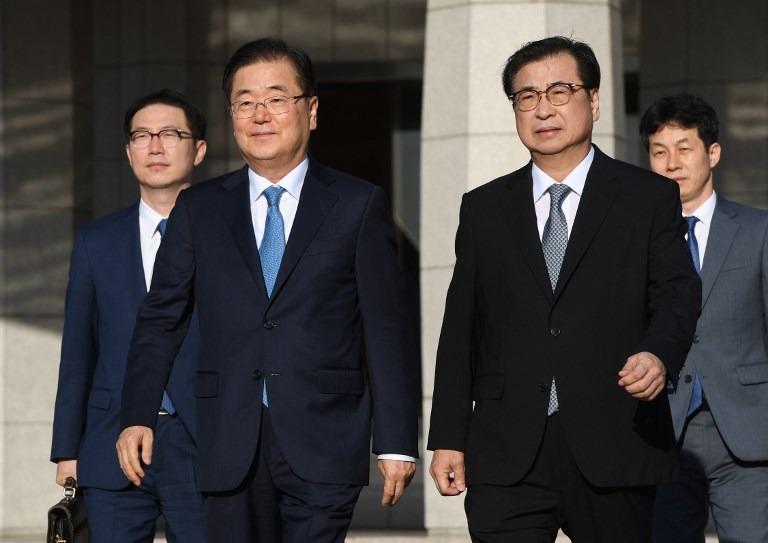 Chung Eui-yong (2nd left), head of the presidential National Security Office, Suh Hoon (2nd right), the chief of the South's National Intelligence Service, and other delegators walk to board an aircraft as they leave for Pyongyang at a military airport in Seongnam, south of Seoul, on Sept 5, 2018. (JUNG YEON-YE / POOL / AFP)

SEOUL - The Republic of Korea (ROK)’s President Moon Jae-in's special envoys met Wednesday with Kim Jong-un, top leader of the Democratic People's Republic of Korea (DPRK), in their one-day visit to Pyongyang, the presidential Blue House of the ROK said.

The five-member special delegation, led by Chung Eui-yong, Moon's top national security adviser, flew via the west air route over the inter-Korean sea border to the DPRK's capital city earlier in the day.

The delegation delivered Moon's letter to Kim, exchanging opinions on the Korean Peninsula situations, according to the Blue House.

The special emissaries were scheduled to return home later in the day after having dinner there. 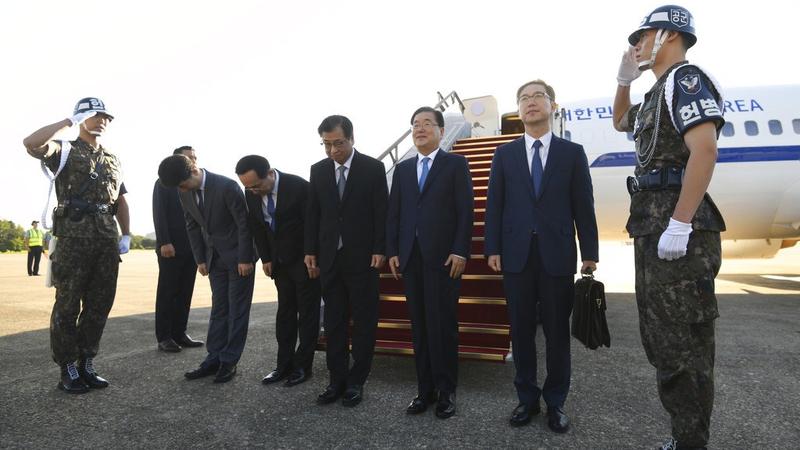 Chung Eui-yong, third from right, head of the presidential National Security Office, Suh Hoon, fourth from right, the chief of the South's National Intelligence Service, and other delegators pose before boarding an aircraft as they leave for Pyongyang, the Democratic People's Republic of Korea, at a military airport in Seongnam, south of Seoul, Republic of Korea, Sept 5, 2018. (JUNG YEON-JE / POOL PHOTO VIA AP)

The Blue House planned to hold a press briefing Thursday on the outcome of the special envoys' visit to Pyongyang.

Moon's special envoys went to Pyongyang to discuss with the DPRK side a detailed schedule and agenda for the third Moon-Kim summit, which the two Koreas agreed to hold in Pyongyang before the end of this month.

The Korean Peninsula's denuclearization and the improved inter-Korean relations were also the issues which Moon's special emissaries planned to consult with the DPRK side, according to the Blue House.