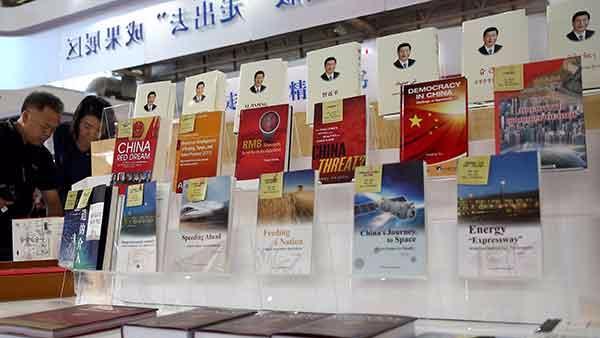 The 24th Beijing International Book Fair, which opened on Wednesday, will present over 300,000 books from 89 countries during its five days. (ZOU HONG / CHINA DAILY)

According to Zhang Fuhai, the director of China International Publishing Group, which runs Foreign Languages Press, the publisher of Xi Jinping: The Governance of China, 6.42 million copies of the book－which has been published in 21 languages in more than 160 countries and regions－have been distributed so far worldwide.

Reviewers see the book as an important window into China and say that is why it is popular worldwide.

"This is the first time a serving leader of China has made his philosophy, his ideas and his programs available to the international community in (so many) multiple languages," said David Ferguson, a Scottish writer, translator and foreign expert with the publishing group.

"An enormous amount of international attention is being paid to China at the moment. There are huge expectations of China. The world wants to know what to expect of China under the current leadership," Ferguson said, explaining the book's popularity.

Meanwhile, the publisher launched the English and French versions of the president's work Up and Out of Poverty on Wednesday.

The book, originally published in Chinese in 1992, comprises 29 of Xi's speeches and articles written during his posting as Party secretary of the CPC Ningde Prefectural Committee in Fujian province, from 1988-90.

Speaking about the book, Wu Shangzhi, vice-minister of the State Administration of Press, Publication, Radio, Film and Television, said: "To eradicate poverty and boost development in eastern Fujian, the president devised innovative ideas, mechanisms and methods, and he has shared those in the book.

"The book shows his concern and care for the people there, and his confidence and determination to fight poverty."

Bah Thierno Maadjou, a counselor with the embassy of Guinea in China, said the book offered thoughts, ways and a vision to help his country and other developing countries in fighting poverty.

Meanwhile, Zhang, the director of the publishing group, said: "President Xi's ideas and the summarization of his experience offered a theoretical and political foundation for poverty alleviation in the country, where 55 million people have been lifted from misery, a feat as well as a miracle in human history.

"The theories are an important part of the Chinese governing philosophy and strategy. And, in multiple languages, the book will offer Chinese wisdom and solutions to issues shared by the international community."

Separately, The Governance of China contains a fuller picture of Xi's ideas.

Milos Balaban, a professor with Charles University in Prague, in the Czech Republic, said at a symposium on the book in 2016 that the publication offered readers a chance to understand the reasons for China's development, especially from a wider historical, political and economic background.

Balaban said the book showed that progress "isn't possible without a sound and complete governing mechanism".

He also said the country's development model offered an example to the Czech Republic as well as other European countries.

He praised the ideas of President Xi, like the economy's "new normal" and the Belt and Road Initiative.

"The ideas and plans will help China achieve its future development goals and cope with challenges, besides helping the world economy, Balaban said.

Also at that symposium, Vojtech Filip, the leader of the Communist Party of Bohemia and Moravia, said, "One of President Xi Jinping's great contributions is that he made the new strategic plans and implemented them, leading China into a new phase of development."

Ten such symposiums, as well as 14 book launches, have been held around the world since the book was released in 2014.

Liu Yuhong of the promotion department of Foreign Languages Press said the publisher believes the global success of the book is a result of efforts by co-publishers in different markets and the international branches of Chinese organizations.

Foreign Languages Press works with co-publishers, usually local entities, and has the book translated by native speakers of the targeted market.

Speaking about what impressed him most in the book, Ferguson said it was the Appendix, which offers a profile of Xi under the title Man of the People.

"Often, Chinese political writing is all facts and figures. It is dry and conceptual, and lacks the human element that we value in the West. But the Appendix from Xi's book tells the story of Xi's experiences from his youth as an 'intellectual being re-educated' in rural Shaanxi. This story enables you to ... see Xi as the very down-to-earth person he is in reality," Ferguson said.

In the profile, Xi is quoted as saying: "The people aspire to a decent life－that is what we are fighting for."