Duterte orders 'immediate' shipping of trash back to Canada 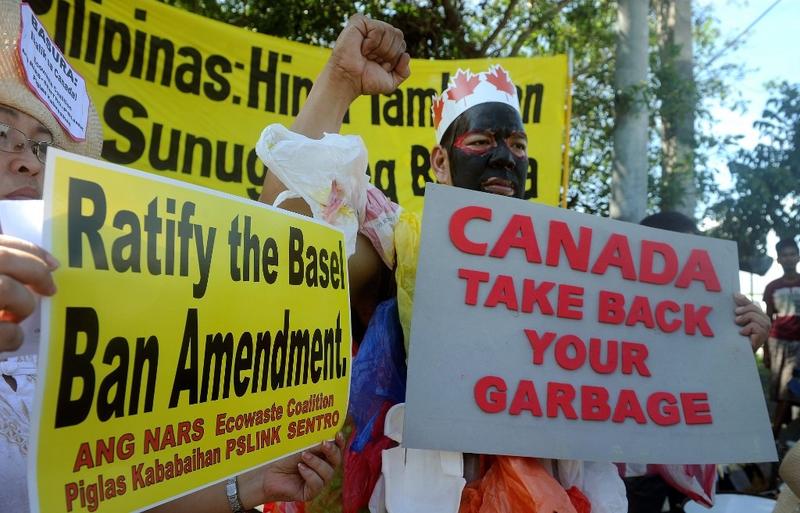 In this Sept 9, 2015  photo, environmental activists rally outside the Philippine Senate in Manila to demand that scores of containers filled with household rubbish be shipped back to Canada and to push for the ratification of the Basel Ban Amendment which prohibits the export of hazardous waste from developed to developing countries. (JAY DIRECTO / AFP)

MANILA - Philippine President Rodrigo Duterte has ordered the "immediate" shipment of tons of Canadian garbage back to Canada even if Manila has to pay the cost of the shipment, Duterte's spokesperson said on Wednesday.

Presidential spokesperson Salvador Panelo said at a news conference that Duterte is "outraged" by Canada's inaction in collecting the tons of waste that Canada illegally shipped to the Philippines from 2013 to 2014.

President Duterte is upset about the inordinate delay of Canada in shipping back its containers of garbage. We are extremely disappointed with Canada's neither here nor there pronouncement on the matter

"President Duterte is upset about the inordinate delay of Canada in shipping back its containers of garbage. We are extremely disappointed with Canada's neither here nor there pronouncement on the matter," Panelo told reporters.

"Canada is not taking this issue nor our country seriously," he said.

"The Filipino people are gravely insulted about Canada treating this country as a dump site."

"As a result of this offending delay, the president has instructed the appropriate office to look for a private shipping company which will bring back Canada's trash to the latter's jurisdiction," he said.

"If Canada will not accept their trash, we will leave the same within its territorial waters or 12 nautical miles out to sea from the baseline of any of their country's shores," he added.

The trash dispute between the Philippines and Canada escalated last week when the Philippines decided to recall its ambassador and consuls general in the Northern American country after Ottawa missed the May 15 deadline imposed by Manila to collect the garbage.

ALSO READ: Naming and 'shaming' the top polluters in the Philippines

The Canadian garbage has been sitting in the Philippines for about six years. In 2013 and 2014, a private Canadian firm exported 103 shipping containers of garbage to the Philippines. Thirty-four of the containers were already disposed of while 69 are now quarantined in ports in Manila and Subic Freeport north of Manila.

The Philippine Bureau of Customs (BOC) found the containers were consisting of household trash, plastic bottles and bags, newspapers, and used adult diapers, according to local media reports.

The Philippines has been urging Canada to collect its waste since 2014.