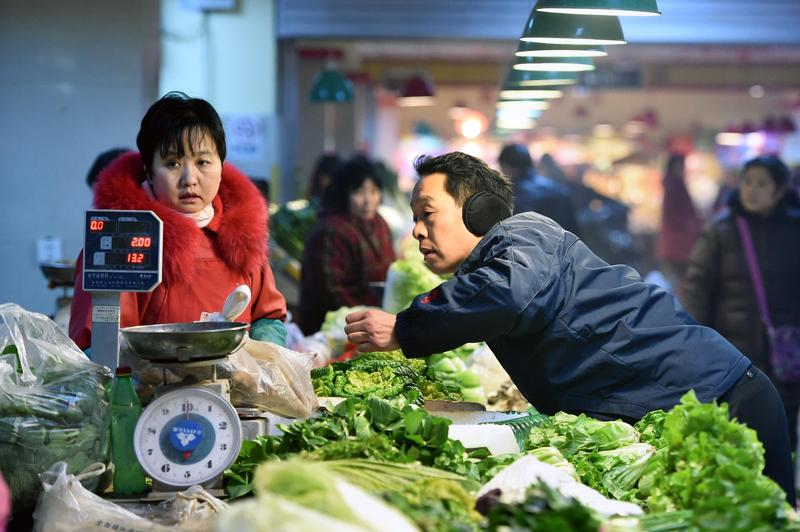 A man purchases vegetables at a wet market in Zhengzhou, Henan province, China on Dec 9, 2015. (XINHUA)

Consumer price index (CPI), a main gauge of inflation, accelerated more than expected to a seven-month high of 1.8 percent in August, up from July's 1.4 percent, beating market expectation of 1.6 percent, according to data released by the National Bureau of Statistics (NBS) Saturday.

For the first eight months of the year, CPI climbed 1.5 percent from one year earlier.

The stronger, yet still moderate, inflation remained well below the government's annual inflation regulation target of around 3 percent for 2017.

On a monthly basis, CPI was up 0.4 percent last month.

Food prices, the biggest component of the CPI, were up 1.2 percent month on month, NBS said.

Excluding volatile food and energy prices, the core CPI increased 2.2 percent year on year in August, up slightly from July's 2.1 percent. The core CPI has been holding steady at a little above 2 percent since March.

Analysts said the pick-up in consumer inflation is unlikely to continue because of a high comparative base in September 2016 and the fading effects of seasonal factors during the rest of the year.

Jiang Chao, chief economist at Haitong Securities, said the CPI increase would ease to 1.6 percent in September and remain subdued for the whole year.

Producer price index (PPI), which measures costs of goods at the factory gate, rose to a four-month high of 6.3 percent in August, compared with 5.5 percent in July, according to NBS.

PPI growth, which was higher than the market forecast of 5.7 percent, was boosted by increases in the prices of steel, non-ferrous metals, as well as oil and natural gas.

On a month-on-month basis, the index was up 0.9 percent last month.

PPI grew 6.4 percent year on year for January-August, unchanged from that in the first seven months.

Orlik expected the central bank to continue dealing with the deleveraging challenge, not to hasten monetary easing.