The risks for Australia in joining another “failed” American war, this one contrived to crush China, are worse than even-money, and climbing. The consequences verge on existential. 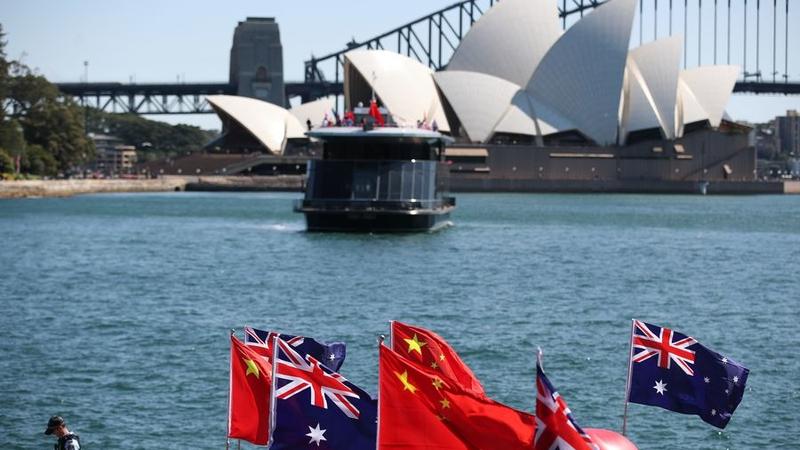 This photo taken on Sept 8, 2019 shows the Chinese and Australian national flags on a celebration event in Sydney, Australia. (PHOTO / XINHUA)

Australia’s wartime Prime Minister John Curtin wrote to Britain’s Prime Minister Churchill in a 1942 letter marked “Most Secret” – “we make no apologies for our effort or even what you hint we are not doing. The various parts of the Empire, as you know, are differently situated, possess varying resources and have their own peculiar problems. “

Curtin’s actions thereafter in drawing troops home, away from imperial priorities, are famous for incisive statesmanship. No cleaner example exists of an Australian PM putting his nation above all else when it mattered most. At once it crystallizes how lonely a Prime Minister can be, and the depth of intellect required to be a geostrategic one. Few have shown the latter quality while many have made its absence evident.

Curtin had not long won government, after a decade of conservative rule, in which obeisance to Britain was ingrained. Today’s PM Anthony Albanese had a similar preparation for leadership. And faces a similar dilemma, with the United States planning to draw Australia into a war with China under the overbearing assumption that our interests coincide, demanding that we yield on fundamental principles of State – our sovereignty, control of armed force and declaration of war.

How Albanese came to find himself in this situation also demonstrates the almost axiomatic geostrategic vacuity of our Prime Ministers.

PM Julia Gillard acquiesced to President Obama’s “tilt to Asia” in a celebratory whirl. Gillard has not ever demonstrated that she grasped the strategic enormity of her concessions, initiated by Obama’s speech to Parliament in 2011. All the while the US avoided any formal security guarantee should Australia be attacked. As the US always has.

PM Tony Abbott, without explanation, formalized our loss of sovereignty through a Force Posture Agreement in 2014. The ANZUS Treaty and decades of defence planning were junked. Instead of building on the impressive progress in defending Australia, a plan for joining a US attack on China was formalized in a new treaty which baldly abrogated Australia’s sovereign rights and freedoms.

PM Malcolm Turnbull intensified the servility to America. His delusion that the two nations could ever be “joined at the hip” starkly calibrates this leader’s naivety. More realistically Australia is a trinket tied to the American ankle, easily flicked adrift. The Turnbull government’s 2016 Defence White Paper astonishingly requires Australia to divert taxpayer money to America’s ambitions against China, in equal measures away from our direct defence. One wonders if any greater act of fealty could be imagined. But that would underestimate our next PM, Scott Morrison.

The evidence is convincing now that the role of the AUKUS boats is to attack China’s nuclear submarines in its adjacent waters and to the depths of the Pacific. Working seamlessly within the American navy. The Chinese submarines are meant to deliver nuclear missiles into the US in response to American nuclear attack on China. They are the key to that nation’s nuclear deterrent

In April 2022 Morrison announced AUKUS abruptly, that Australia would construct nuclear submarines without nuclear weaponry. No mention of their role was included – puzzlingly, as no nation has ever invested so heavily in a system to deliver little more than a few ute loads of conventional explosive. The extraordinary cost of up to $170 billion was three times our entire annual Defence budget, easily.

The evidence is convincing now that the role of the AUKUS boats is to attack China’s nuclear submarines in its adjacent waters and to the depths of the Pacific. Working seamlessly within the American navy. The Chinese submarines are meant to deliver nuclear missiles into the US in response to American nuclear attack on China. They are the key to that nation’s nuclear deterrent. To the extent they are at risk, China’s nuclear deterrence fails. Thus the AUKUS boats are meant to help break the deterrent balance between China and the US. It is hard to think of what else Australia could do that would more strongly signal enmity to China. Of all the options for Australia to cooperate with America on, this prime minister chose to assist in America inflicting a successful nuclear attack on the Chinese homeland – at mind-boggling cost to Australian taxpayers.

So that is the record of our previous four prime ministers. Each geo-strategically barren and unable to identify with Australia’s interests. Collectively giving away the farm while paying handsomely for the act, then carefully selecting a grievously hostile affront to our largest trading partner’s security. Anathema to the qualities of John Curtin. This is what PM Albanese has walked into.

Is it beyond Australia again to produce a leader such as Curtin? Maybe, we need not feel it’s a lost cause, yet. Former PM Paul Keating displayed superior statesmanship in office. That quality continues into wise commentary on global strategic affairs. Of all the public speculation (professional and otherwise) on the possible role of the AUKUS submarine it is only Keating who has hit the nail on the head. And more broadly, even as far back as 1997 Keating foreshadowed the military disaster which we now witness in the Ukraine – in a perceptive masterpiece on Europe.

Australia’s strategic situation today compares eerily with Curtin’s. Both involve the global power of the day striving to retain its position militarily, inadequately resourced. Thus, each power naturally husbands “allied” resources to its own ends, indifferent to the risks imposed on friends. Today is different in that no formal declarations of war exist. Meaning that time perhaps is a more accessible factor today.

Mike Green, head of the US Studies Centre at the University of Sydney

Fundamentally, America does not have the force it requires for its military objective against China. It has intimated that in many ways. Head of the US Studies Centre at the University of Sydney, Mike Green recently said:

You can see it in the Biden administration, too. The Indo-Pacific strategy from the White House mentions allies more than 30 times. So it’s elite opinion as well as public opinion.

The alliance itself needs “retooling” after decades of stasis: “Rotating Marines is good but it’s not a grand strategy. There’s a real opening for the Albanese government to shape the alliance. Not through lecturing Washington about how Asia works but through ideas.”

American governments have adopted the neo-con realism of Strauss/ Wolfawitz to filter world dynamics, trusting in force to retain power, for at least the last four decades. More constructive means have been spurned for this tragically puerile mindset.

Thus, America now requires that Japan rearm. Which most of Japan’s citizens find sickening. The incongruity of Australia embracing a remilitarized Japan is bitter food for thought.

The US will keep throwing allies under buses as it becomes evermore burdened. The pervasive frailties appear constantly refreshed. As my colleague Dennis Argall points out:

The US is at war, and the dollar is at risk of imminent collapse. Australia’s lobbying of the United States as a good ally should focus on these issues above all else.

So what about Australia’s interest? In truth, America doesn’t need Australia to battle China.

The risks for Australia in joining another “failed” American war, this one contrived to crush China, are worse than even-money, and climbing. The consequences verge on existential.

For PM Albanese the next policy event is the Defence Strategic Review, due soon – led by the former Defence Minister for Gillard, Stephen Smith, an intimate party to the agreement with Obama in 2011 to open Australia for America’s global manipulation.

Over to our latest Prime Minister.

This year will require scarce qualities of perception and judgement. And values which put Australia foremost. Above all, the vision to see beyond the sea of heads now congregating comfortably at Australia’s peril. It happened once before.

Dr Mike Gilligan worked for 20 years in defence policy and evaluating military proposals for development, including time in the Pentagon on military balances in Asia.

The article was first published at PEARLS & IRRITATIONS:  https://johnmenadue.com/whats-a-prime-minister-for/