London's National Gallery displays priceless artworks in the city as it undergoes renovation and sets up a "miniature" version of itself, Zhang Kun reports. 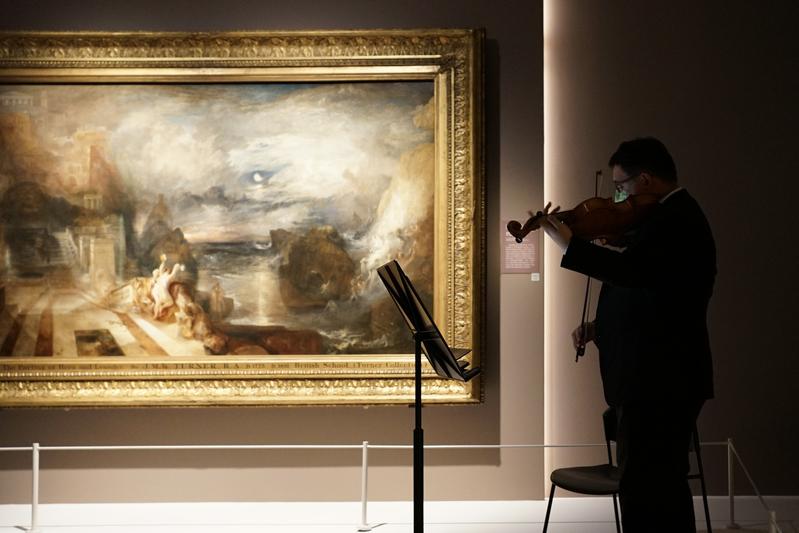 Violinist Yu Haifeng performs in front of The Parting of Hero and Leander — From the Greek of Musaeus by British Romantic artist Turner during the exhibition in Shanghai. (PHOTO PROVIDED TO CHINA DAILY)

Since its establishment, the Shanghai Museum has had a reputation for showcasing some of the rarest artifacts in the world, and the venue recently wowed visitors again with not just historical artworks but also a rare display of showmanship.

It engaged a string quartet from the Shanghai Symphony Orchestra to accompany its latest exhibition Botticelli to Van Gogh: Masterpieces From the National Gallery, London.

The quartet played a carefully selected program in front of four major artworks: Raphael's The Garvagh Madonna, Caravaggio's painting Boy Bitten by a Lizard, Van Gogh's Long Grass with Butterflies, and The Parting of Hero and Leander — From the Greek of Musaeus by Turner.

Featuring 52 oil paintings from the period spanning the Italian Renaissance in the 1500s to the Post-Impressionism era in the late 19th century, the highly anticipated exhibition opened on Tuesday and will run until May 7.

This is the first time the National Gallery in London has had such an event in China. 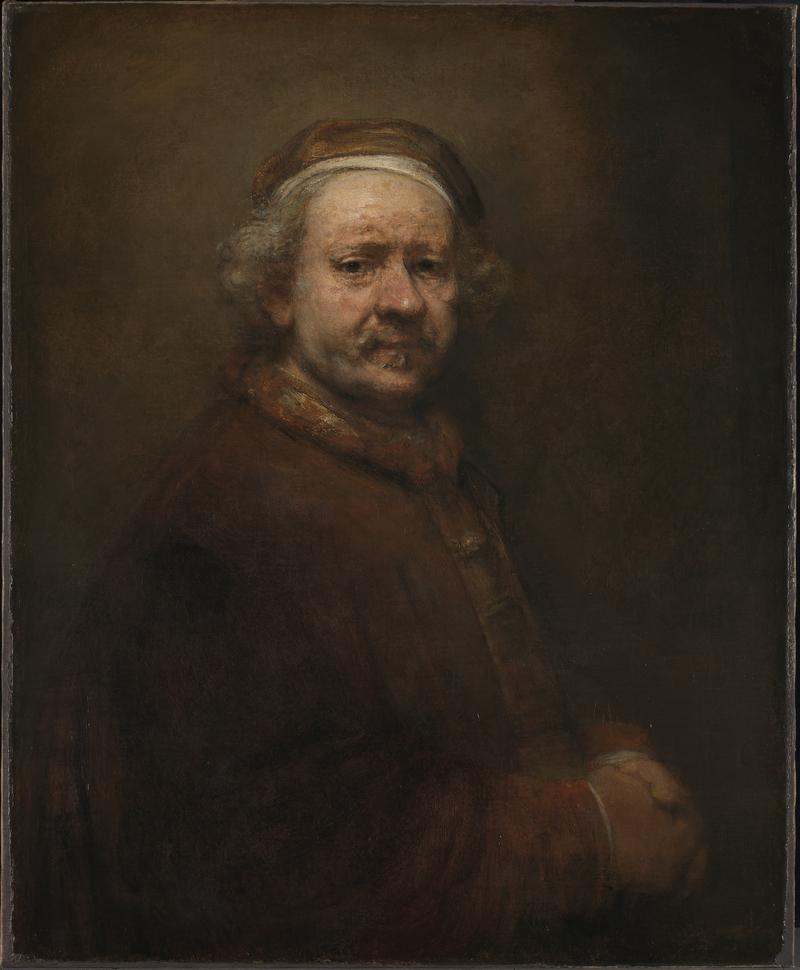 Self Portrait at the Age of 63 by Dutch artist Rembrandt. (PHOTO COURTESY OF THE NATIONAL GALLERY, LONDON)

One of the 10 most visited museums in the world, the gallery is currently undergoing renovation in preparation for its bicentenary celebration next year.

The 52 artworks were transported in seven batches to Shanghai unaccompanied by staff of the British institution. The most expensive piece, Long Grass With Butterflies by Van Gogh, which has an estimated insured valuation of 1 billion yuan ($147.7 million), was the last to arrive on Jan 12 due to flight cancellations.

Since the outbreak of COVID-19 in early 2020, the Shanghai Museum has made artwork transactions via web conference with foreign counterparts multiple times.

For example, the museum held a large exhibition titled West Encounters East: A Cultural Conversation Between Chinese and European Ceramics, which featured ceramic objects from the Guimet Museum in Paris, dedicated to Asian arts, in 2021.

The significance of international exhibitions not only lies in the exchange of artworks, but also the communications between museum staff, says Chu Xin, deputy director of the exhibition department at the Shanghai Museum.

"We long for face-to-face communications with international colleagues," Chu says. "This will help us to improve our professional practice, learn about different cultures as well as distinctive working styles."

Now that China has adjusted its policies regarding international travel, the Shanghai Museum has extended an invitation to the National Gallery in the United Kingdom, hoping that their British counterparts can visit the exhibition in Shanghai, notes Chu.

"This exhibition is like a textbook, because it not only presents renowned artists' works, such as those by Botticelli, Raphael, Rembrandt and Monet, but more importantly, it traces the development of the art history," she adds, noting that it is the responsibility of a museum to guide and educate the public. 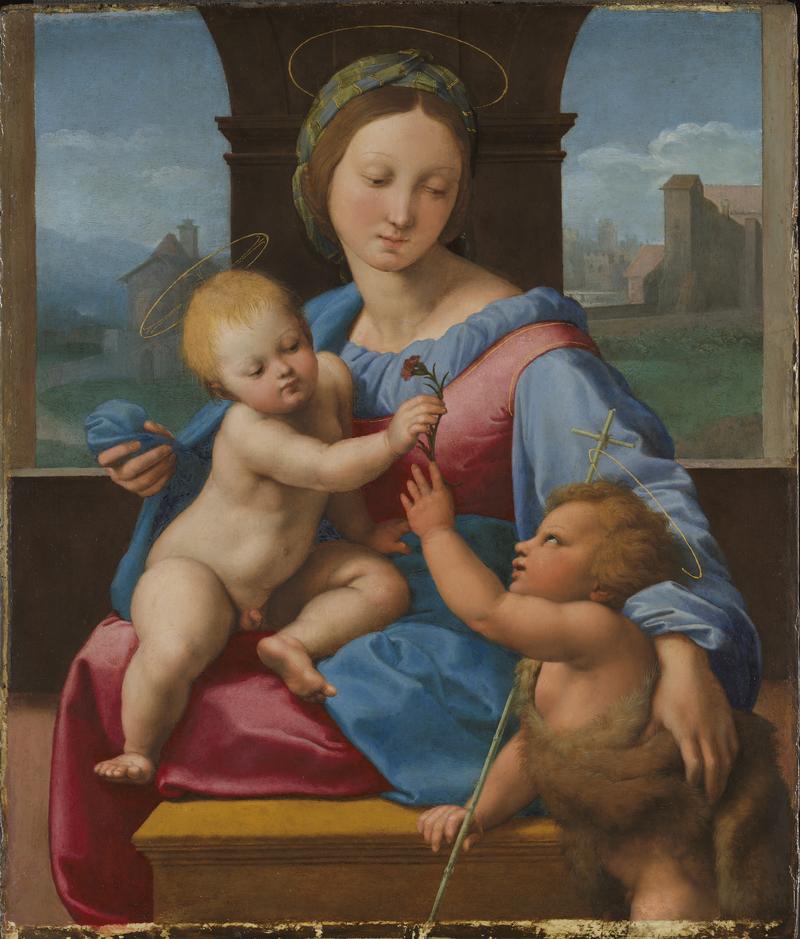 The Garvagh Madonna (The Madonna and Child With the Infant Baptist) by Italian Renaissance master Raphael. (PHOTO COURTESY OF THE NATIONAL GALLERY, LONDON)

Guo Liang, a professor of Western art history at the Academy of Fine Arts of Shanghai University, was among the first visitors to the exhibition. He claims that the exhibition is "the best in Shanghai in the past 10 years".

"Seeing oil paintings in print is very much different from seeing the original artwork," he tells China Daily. "Standing in front of the actual piece, you will find intricate changes between light and shade, the depiction of different textures, details and a lot more. … I would definitely recommend my students to this show."

Guo says that one of the artworks that impressed him the most was Boy Bitten by a Lizard by Caravaggio. According to him, Caravaggio's ingenious use of contrast, emphasis on details of gesture and facial expression and strong emotions and theatrical effects in his painting had an enduring influence on Western art. Caravaggio's style had even inspired many artists such as Rembrandt and Velazquez, whose work are also on display, he adds.

The Shanghai Museum has also created an immersive digital showcase featuring 20 treasured pieces from the National Gallery that could not be shown in Shanghai. These works include Sunflowers by Van Gogh, The Virgin of the Rocks by Da Vinci, and Waterlilies by Monet.

The museum is also planning to showcase a series of about 10 documentaries in its lecture hall during the exhibition period so that visitors can learn more about the stories behind these masterpieces. 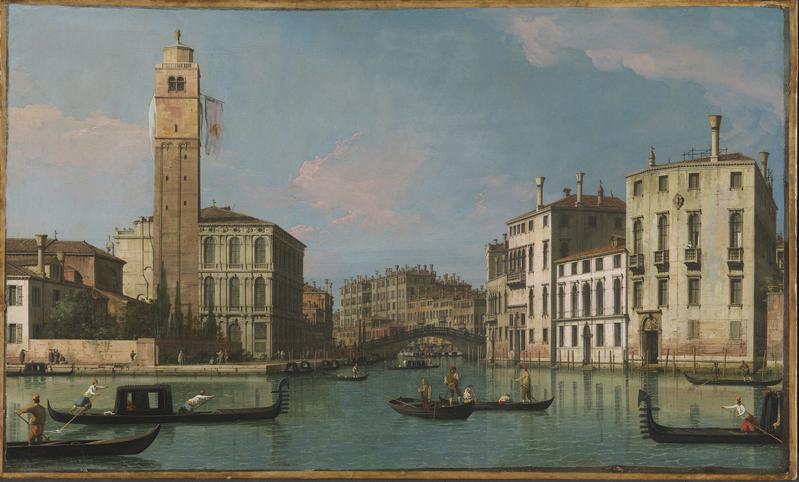 Entrance to the Cannaregio by Italian painter Canaletto. (PHOTO COURTESY OF THE NATIONAL GALLERY, LONDON)

Since its establishment in 1952, the Shanghai Museum has carried out in-depth cooperation with more than 182 institutions of arts and cultural relics at 105 cities in 28 countries and regions across Europe, the Americas, Asia and Oceania.

"We have stayed at the frontier of international communications for art and culture, and this exhibition is the latest initiative of this mission," says Chu Xiaobo, director of the Shanghai Museum.

The museum is currently planning to put together the exhibition A History of China in 100 Objects, which will go on international tour later this year.

This year marks the 10th anniversary of China's Belt and Road Initiative, and the Shanghai Museum will give priority to collaborations with important museums in the countries involved in the BRI, Chu Xiaobo says.

"We are also aiming to open international branches abroad. We have kicked off feasibility studies before the pandemic, and this year we intend to resume the work, and maybe start from opening a Chinese exhibition hall in foreign museums," he adds.

Botticelli to Van Gogh: Masterpieces from the National Gallery, London