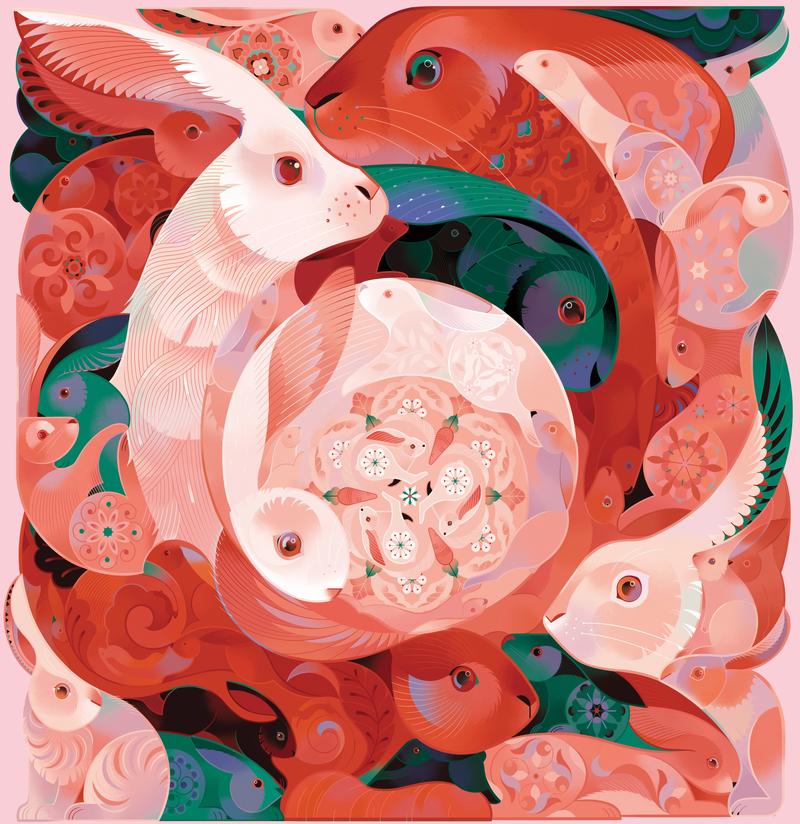 Designed to increase human interaction, these digital avatars are created by technology powered by artificial intelligence.

A virtual anchor created by Dragon TV played a flute and danced with celebrity singer Cheng Xiao during the Shanghai broadcaster’s New Year gala, which was watched by tens of millions of viewers.

A virtual rock band caught the eye at a concert staged by Sichuan Television to mark the arrival of 2023. The band comprises five digital avatars based on cultural relics found at the Sanxingdui site in Deyang, Sichuan province, which is known for its exotic-looking bronze statues.

Ma Yuqi, joint director of the concert, said the band’s appearance was designed to attract as many young audience members as possible.

The appearance of virtual beings at New Year galas staged by TV stations and online platforms reflects just how popular these figures have become in China in the past 12 months. The concept of the metaverse — where the physical world combines with the virtual — has also gained traction in recent years.

According to a report on the virtual people industry last year released by the consultancy company iiMedia Research in April, the estimated market scale of virtual humans was some 12.08 billion yuan ($176 million) and will reach about 20.52 billion yuan this year.

The report noted that digital beings are now used widely in the entertainment and cultural sectors as icons, anchors and employees. In China, this boom is largely driven by Generation Z — those born in the late 1990s or early 2000s, who are seen as being familiar with digital technology, the internet, and social media from a young age. 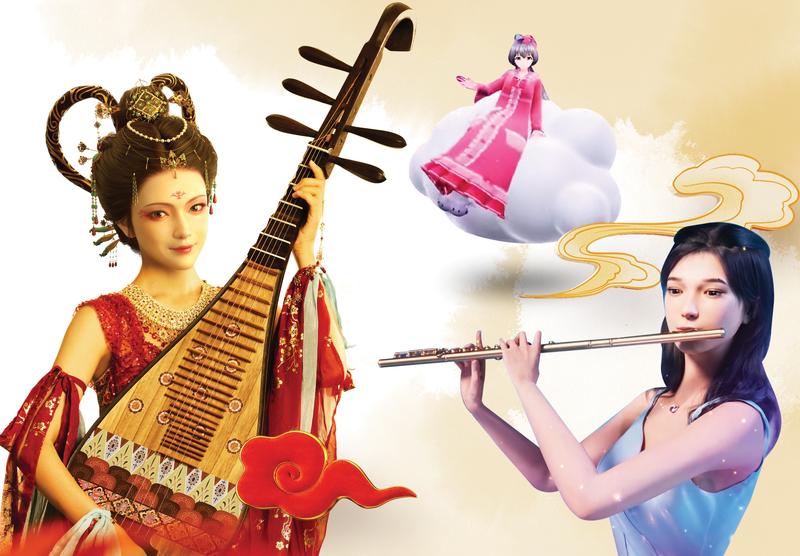 From left: Tianyu, a virtual star, is modeled on the Flying Apsaras, a motif from Mogao Caves murals in Dunhuang, Gansu province; Luo Tianyi, a virtual singer, is the most popular such celebrity on the Bilibili short-video platform; Dongfang AI, a virtual anchor, performs during Dragon TV’s New Year gala. (PHOTO PROVIDED TO CHINA DAILY)

Ji Zhihui, who has observed the industry for more than a decade, said Generation Z members matured as the Chinese economy and technology developed rapidly. As a result, this group has taken to online activities such as watching videos, listening to music, and making friends. Generation Z comprises the majority of the metaverse’s future residents, Ji said.

“In the future, internet users will migrate to the virtual world,” Ji added.

One of China’s leading streaming platforms, iQiyi, was among the first companies to invest in virtual beings.

Two years ago, it launched a virtual idol talent show, Dimension Nova, aimed at introducing such idols to a wider audience. The show generated popular hashtags that were viewed more than 1.2 billion times in two months on the Sina Weibo micro-blogging platform.

On New Year’s Eve, iQiyi staged Retaland, a virtual concert in four parts based on various themes. The performers were all virtual idols, and one of them was created from the image of popular star Gong Jun, known for his role in a martial arts TV series. According to iQiyi, the concert was aimed mainly at Generation Z.

Lu Bin, head of a virtual idol studio affiliated with iQiyi, said: “Followers of these idols are mostly young people who grow up with anime, comics and games. Those younger than 24 account for the majority of this group.”

The studio, which was set up in 2021, has signed more than a dozen digital beings, including band members, anchors and influencers.

One of the studio’s star performers, D.M, features twin siblings Damian and Millie. The former is a handsome rapper, while the latter is a cool street dancer. They have their own accounts on numerous social media platforms, and perform at concerts and art shows.

A-Soul, a virtual girl group created by Yue Hua Entertainment, a leading celebrity agent in China, comprises five members, each of whom has a distinctive style. Members of the group have millions of followers on social media platforms, and they have been in high demand on the Bilibili short-video sharing platform, which is especially popular with Generation Z. 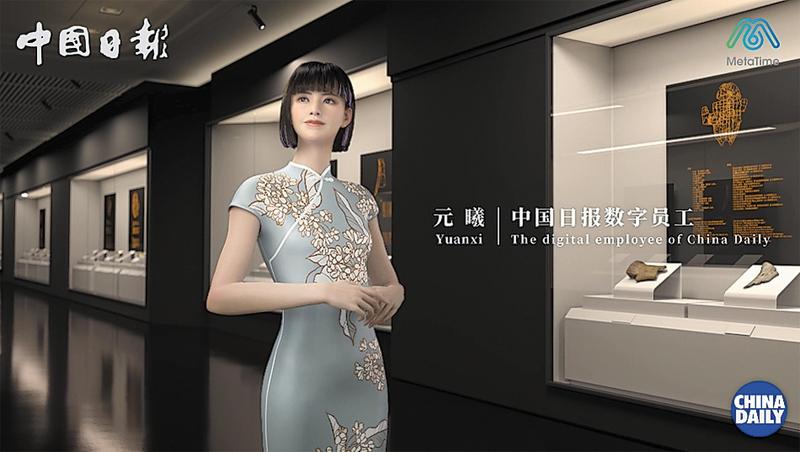 Luo Tianyi, the virtual singer who debuted 10 years ago, is the most popular such celebrity on Bilibili. Luo’s fans compose music, write songs and draw illustrations for her — contributing greatly to developing the digital avatar’s personality.

At a cultural event to celebrate the Beijing Winter Olympics in February last year, Luo sang the song Time to Shine while wearing a light blue qipao, which gave her exposure to a wider audience. According to media reports, some 30 virtual celebrities took part in activities related to the Winter Olympics in the Chinese capital, including a digital avatar of champion freestyle skier Gu Ailing.

Unlike Luo, whose image is largely based on animation, many of her counterparts look like real people.

For example, Tianyu, modeled on the Flying Apsaras, a motif on murals at the Mogao Caves in Dunhuang, Gansu province, has won more than 3.5 million followers since debuting in April last year on the short-video platform Douyin. Many netizens said they could not tell whether Tianyu was a real person or not.

A clip of Tianyu on Douyin lasting less than two minutes garnered nearly 2 million likes. In the footage, she helps a popular TV actress fight a bad guy.

Tianyu’s stunning beauty and stylish clothes are inspired by elements of traditional Chinese culture. The virtual star can play the pipa (a four-stringed instrument) and perform jin dance (a unique dance style in ancient China).

Zheng Yicheng, who manages the studio in which Tianyu was created, described the virtual being as “the beacon to spread Chinese culture to the world”.

The boom in virtual avatars has been accompanied by policy support from the central and local governments.

In October 2021, the National Radio and Television Administration announced a plan to promote the wider application of virtual anchors and animated presenters in news broadcasts, weather forecasts, variety shows, and science and education programs.

As a result, numerous media outlets have hired digital employees as reporters, hosts and anchors. Many of these employees have reported on major events.

Cultural organizations, art institutions and cities were quick to create their own digital ambassadors or virtual spokespeople.

Last year, the China National Museum welcomed its first digital employee, Ai Wenwen, who works in different departments at the institution to learn about art collections, art displays and the research of cultural relics to prepare for museum-related work in cyberspace.

This art form, which originated in the Western Zhou Dynasty (c. 11th century-771 BC), continues to thrive in a vast area of Northwest China. In 2006, it was added to the nation’s intangible cultural heritage list.

Chen Shaofeng, a professor of cultural industries research at Peking University, said the mushrooming growth of digital humans in the cultural industry is an inevitable trend that will provide a good and innovative service for the public.

“With highly developed technologies, the cultural sector will largely embrace the virtual world. It’s a challenge for us all. We should think about how to work with these virtual beings to offer a better service,” Chen added.