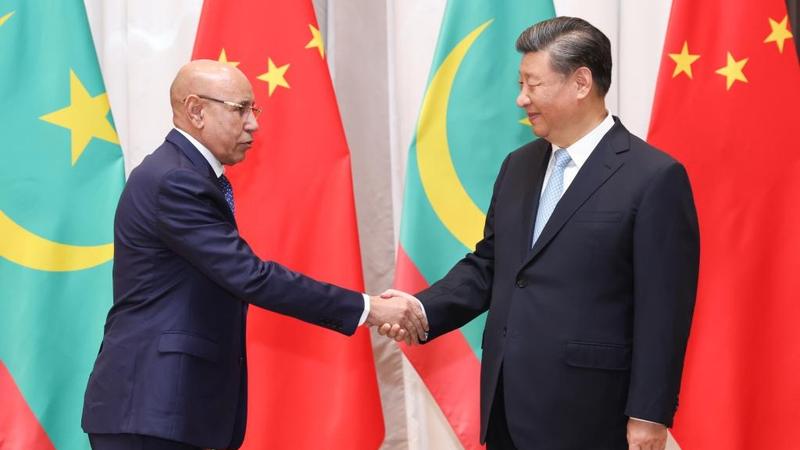 Over the years, China has been assisting Mauritania in implementing road, bridge, hospital and other major projects that benefit people's wellbeing, Xi emphasized, adding that China will continue to encourage Chinese enterprises to take an active part in Mauritania's energy, fishery, mining, infrastructure and other sectors to bring benefit to the Mauritanian people.

With the commitment and intention unchanged to Arab and other developing countries, China is willing to work with Arab countries including Mauritania and make all-out efforts to build a China-Arab community with a shared future for the new era and jointly create a new future for the development of China-Arab relations, Xi said.

Xi said Mauritania is also an important witness, participant and contributor of China-Africa collective cooperation and China is ready to work with the Mauritanian side to build a China-Africa community with a shared future in the new era.

Saying that Mauritania and China enjoy a well-developed relationship and cooperation in various fields has achieved positive results, Ghazouani said Mauritania has always firmly adhered to the one-China policy, and the one-China principle is an important red line to which the Mauritanian side will continue to unswervingly adhere.

Mauritania will also continue to firmly support China's position on human rights and oppose any interference in China's internal affairs in the name of human rights, he added.

Ghazouani thanked China for constantly providing various selfless assistance to Mauritania, saying that many important facilities and projects assisted and built by China, as well as the Chinese medical team, have benefited people's livelihood and boosted local economic and social development.

Mauritania hopes to maintain high-level exchanges with China, learn from China's successful experience in governance and continue to expand and deepen cooperation in various fields, said Ghazouani, adding that China is a friend and partner of the whole Arab world, and the convening of the first summit between China and Arab states comes at the right time and will surely have a significant and positive impact on the Arab world and the rest of the globe.