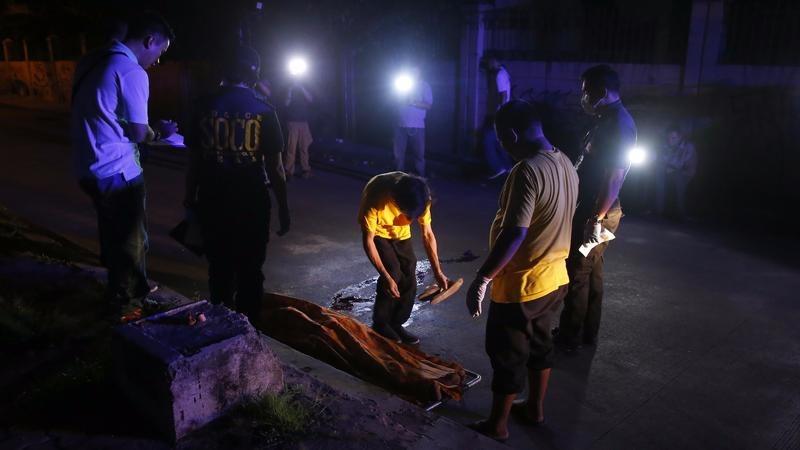 Funeral workers prepare to remove the body of a crime suspect after he was killed in gunbattles late Aug 17, 2017 in Manila, Philippines. Philippine police killed drug and crime suspects in the overnight gunbattles in the capital. President Rodrigo Duterte expressed his satisfaction with the new spike in drug killings and reassured law enforcers they will not rot in jail if they get entangled in lawsuits. (BULLIT MARQUEZ / AP)

Rights groups on Thursday welcomed the rare conviction and called for justice for thousands more who died during Duterte's six-year term, which ended in June 2022.

More than 6,200 people were killed in police operations under Duterte's war on drugs

READ MORE: At least 80 dead after escalation in Philippines war on drugs

A Caloocan City court in the capital region sentenced police officer Jefrey Perez to two terms of life imprisonment, disqualification from public office, and monetary penalty over the arrest of Carl Angelo Arnaiz, 19, and Reynaldo De Guzman, 14, in August 2017, both of whom died.

"The planting was intended to paint a picture that Carl was a criminal...and his death was a result of a legitimate police operation," according to presiding judge Rodrigo Pascua's ruling dated Nov. 10, which was made public late on Wednesday.

The court said the police officer was guilty of torture and planting plastic sachets containing marijuana leaves and methamphetamine and a .38-caliber revolver on Arnaiz.

A police report had said Arnaiz died in a gunfight while De Guzman's body was later found with stab wounds.

"This is a warning to all law enforcers to not use excessive force against civilians," Persida Acosta, chief of the Public Attorney's Office, which handled the case, told ANC news channel on Thursday.

The Philippine police did not immediately respond to a request for comment.

More than 6,200 people were killed in police operations under Duterte's war on drugs. Police reject allegations the killings were executions, saying the drug suspects violently resisted arrest, and that authorities acted in self-defence.

"We are not satisfied. This is only a drop in a bucket," Amnesty International Philippines said on Facebook. "Those who emboldened the police to torture, kill and plant evidence must be made to account, not just the low level police," it added.