By Prime Sarmiento and Xu Wei in Bali, Indonesia 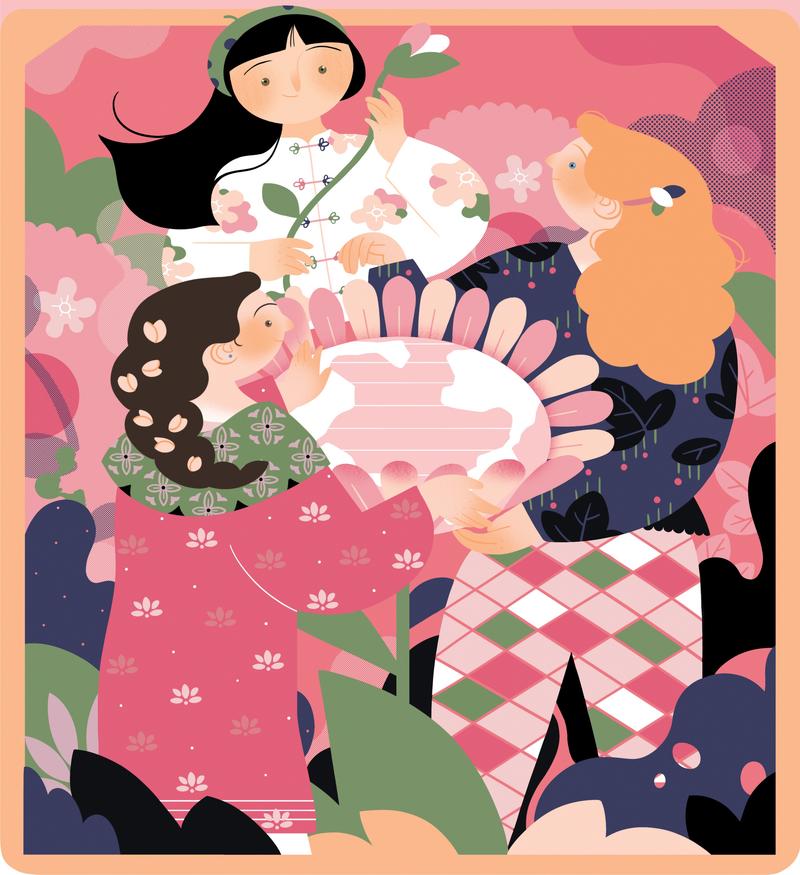 Leaders of the world’s biggest economies and international organizations reaffirmed the need to address our planet’s pressing challenges at the Group of 20 Summit in the small but beautiful resort island of Bali in Indonesia this week.

Held at The Apurva Kempinski Bali which stands atop the majestic cliff of Nusa Dua and faces the sea on one side, the summit tackled the difficult issues of post-pandemic recovery, climate change and conflicts, with promises for a better future.

“A time of collaboration is deadly needed to save the world,” said Indonesian President Joko Widodo, who headed the 17th G20 Summit in Bali, to about 40 global leaders that he welcomed.

In his opening address on Nov 15, he called for all to be responsible not only for people in each country, but people of this world. In his closing speech on Nov 16, Widodo said Indonesia’s presidency of the group produced concrete deliverables such as a list of cooperation projects that can help bring the work of the G20 closer to the people and ensure that all benefit.

The 17th G20 Summit’s theme is “Recover Together, Recover Stronger”, alluding to the timing of this international meeting when economies around the world are slowly rebounding from a pandemic amid major headwinds against a sustained recovery.

In a news briefing after the two-day summit, Widodo listed the “concrete, tangible actions” that have been undertaken under Indonesia’s stewardship of the group this year. These include the $1.4 billion Pandemic Fund that aims to help developing countries cope with future pandemics and other global health threats.

He also cited the Just Energy Transition Partnership between Indonesia and the International Partners Group, which brings in major developed economies such as the United States, Japan, German and France to help mobilize $20 billion over the next years to retire coal plants and shift toward renewable energy sources.

A joint declaration of the G20 leaders finds them committing to concrete action that can help revive the global economy. The leaders said they will take coordinated actions to advance an agenda for a strong, inclusive and resilient global recovery and sustainable development that delivers jobs and growth. To achieve this aim, they affirmed that they will be flexible in their macroeconomic policy responses.

They have also committed to long-term fiscal sustainability by using all available tools to mitigate risks, and vowed to promote food and energy security and stabilize markets, providing temporary and targeted support to cushion the impact of price increases.

Chinese President Xi Jinping, in his address to the summit on Nov 15, said that all G20 members should take the responsibility inherent in being major international and regional players, and should lead by example in promoting development of all nations, improving the well-being for the whole mankind, and advancing progress of the entire world. He said China supports the African Union in joining the G20.

Xi on Nov 16 highlighted the necessity for the Group of 20 economies to spur the vitality of digital cooperation, and for striving to eliminate the digital divide. 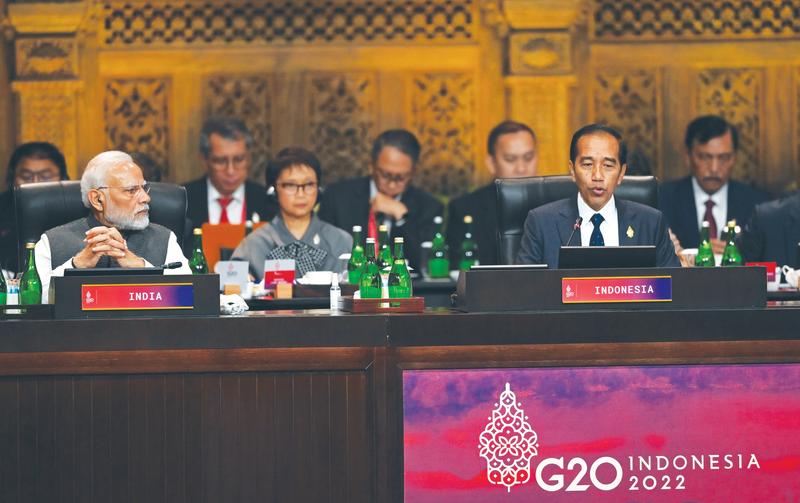 Indonesian President Joko Widodo delivers a speech at the 17th G20 Summit in Bali, Indonesia. He concluded the meeting on Nov 16 by handing over the gavel symbolizing G20 presidency to Indian Prime Minister Narendra Modi for the group’s 2023 events. (PHOTO Courtesy of G20.org)

Indian Prime Minister Narendra Modi said the G20 members need to have “concrete and collective resolve” to ensure global peace and security. At the conclusion of the group’s 17th summit, Modi received the gavel symbolizing the G20 presidency from Widodo at a simple handover celebration.

United Nations Secretary-General Antonio Guterres called on the world to come together in addressing the challenges.

The Ukraine-Russia conflict drew much heat during the summit. Widodo said the issue became the most contentious provision in regard to wording of the joint declaration and that they had intense debates before reaching an agreement.

On the first day, Widodo said in English: “Being responsible means creating win-win, not zero-sum situations, being responsible here also means that we must end the war,” without specific reference. “If the war does not end, it will be difficult for the world to move forward and difficult for us to take responsibility for this generation and coming generations.”

Speaking via video link to the summit, Ukrainian President Volodymyr Zelenskiy urged the G20 leaders to adopt a 10-point peace formula and end the Ukraine conflict “justly and on the basis of the UN Charter and international law”.

Russian Foreign Minister Sergei Lavrov, attending the summit instead of President Vladimir Putin, said the conflict with Ukraine is a hybrid war. Western countries had tried to “politicize” a joint declaration at the G20 Summit, he said, accusing them of pushing for inclusion of a line denouncing Russia’s action in Ukraine, Reuters reported.

During a luncheon speech on Nov 15, International Olympic Committee President Thomas Bach said he found the summit’s theme resonating well with new Olympic motto of “faster, higher, stronger — together”. Olympic spirit features solidarity and peace, he said, calling for world leaders to “give peace a chance”.

FIFA President Gianni Infantino, followed with pointing out that football unites the world. He proposed a ceasefire in Ukraine for a month for the duration of the 2022 World Cup, which kicks off in Qatar on Nov 20.

The joint declaration stated that the Ukraine conflict further adversely impacted the global economy this year, and that “most members strongly condemned” the military action.

“The use or threat of use of nuclear weapons is inadmissible. The peaceful resolution of conflicts, efforts to address crises, as well as diplomacy and dialogue, are vital,” said the declaration.

The summit was slightly interrupted on Nov 16, when US President Joe Biden huddled with Group of 7 and NATO partners in Bali, hours after the Polish government confirmed that two citizens were killed in explosions in the city of Hrubieszow, near the border with Ukraine.

After the meeting, Biden said early information suggested the blast may not have been caused by a missile fired from Russia. Meanwhile, NATO Secretary-General Jens Stoltenberg also echoed the view, saying in Brussels: “Our preliminary analysis suggests that the incident was likely caused by a Ukrainian air defense missile fired to defend Ukrainian territory against Russian cruise missile attacks.” 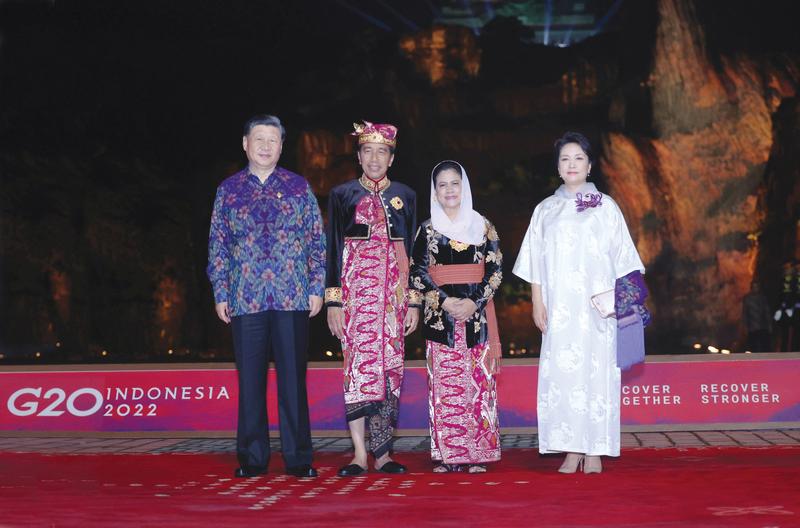 President Xi Jinping and his wife, Peng Liyuan, pose for a photo on Nov 15 with Indonesian President Joko Widodo and his wife, Iriana Joko Widodo, before a welcoming dinner for world leaders at the G20 Summit in Bali, Indonesia. (JU PENG / XINHUA)

President Recep Tayyip Erdogan of Türkiye told a news conference in Bali on Nov 16 that they are trying to help Ukraine and Russia to go back to negotiating table and that their talks with Russian leaders are based on human sensitivities. “Only peace can yield positive results,” he said.

Summit host Widodo took many leaders to Ngurah Rai Forest Park in Denpasar city, Bali province, on the morning of Nov 17, where the leaders planted trees. The park is home to a wealth of biodiversity and religious and cultural sites.

The summit in fact started by responding to the challenge of climate change by launching the Just Energy Transition Partnership. Luhut Pandjaitan, Indonesia’s Coordinating Minister of Maritime Affairs and Investment, said his nation wants to “build a more sustainable economy for the future generation”.

Charles Michel, president of the European Council, said that this is now the time for developed countries “to pay their fair share” in mitigating the impact of a warmer planet.

Michel said in a press briefing that the European Union is supporting decarbonization projects in developing countries, helping them to accelerate their transition to green energy and technology. He cited EU’s energy transition partnership with South Africa, adding that the EU is “ready for more partnerships like this”.

Sheikh Mohamed bin Zayed Al Nahyan, president of the United Arab Emirates, said his country is committed to its “responsible role” in the global energy market and that it has included the clean energy sector as a key priority.

Earlier, on Nov 14, UN chief Guterres, in his message for Africa Industrialization Day, which falls on Nov 20, called for joining forces to build a more prosperous Africa.

“On Africa Industrialization Day, let us join forces to build a more sustainable, peaceful and prosperous continent for all,” Guterres said.

Xue Jingqi in Bali and Xinhua contributed to this story.