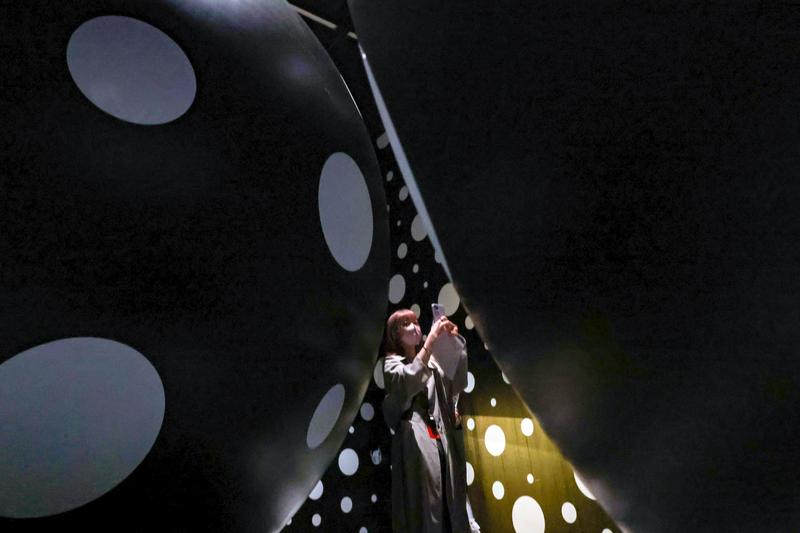 Aglass-fronted cube sits inside a dark, bunker-like space called the Studio in the basement of M+ museum, obliterated, almost, by gigantic, polka-dotted inflatable black spheres. More polka dots, some with a mirror finish, are plastered on the Studio’s black walls. Visitors to the space look a little lost, trying to find their way between the spotted orbs, hung from the ceiling and nearly touching the ground, and their infinite reflections.

A queue outside the glass cube leads to more mirrors and illuminated polka-dotted spheres. The wait time for 30 seconds of selfie time could be anything from 40 minutes to an hour. Ushers carrying stopwatches monitor the entry and exit points.

This is a slice of the fantasy world of Yayoi Kusama (born 1929), one of the most iconic women artists alive. Called Dots Obsession – Aspiring to Heaven’s Love (2022), the installation could come across as theme-park entertainment material or the work of a master, highlighting humanity’s place in a boundless, multitudinous universe.

If Kusama anticipated the day of the Instagram when she created her first mirror room in 1965, she was also way ahead of her time in calling attention to a few other things that we are finally reconciled to accepting as part of the human condition. Yayoi Kusama: 1945 to Now, which opened to the public last weekend, seeks to encapsulate the journey of a visionary artist who has consistently used her in-your-face, over-the-top approach to open a portal to necessary conversations — about mental health, caring for the planet, and the ties that bind the human race.

That the exhibition comes on the back of coping with nearly three years of pandemic-inflicted stress adds an extra layer of immediacy to the theme of art as therapy, which Kusama embraced a long time ago and has been revisiting ever since. This is evident in the never-ending loops of paint across the canvas in some of her instantly recognizable works such as The Pacific Ocean (1959) and Transmigration (2011). 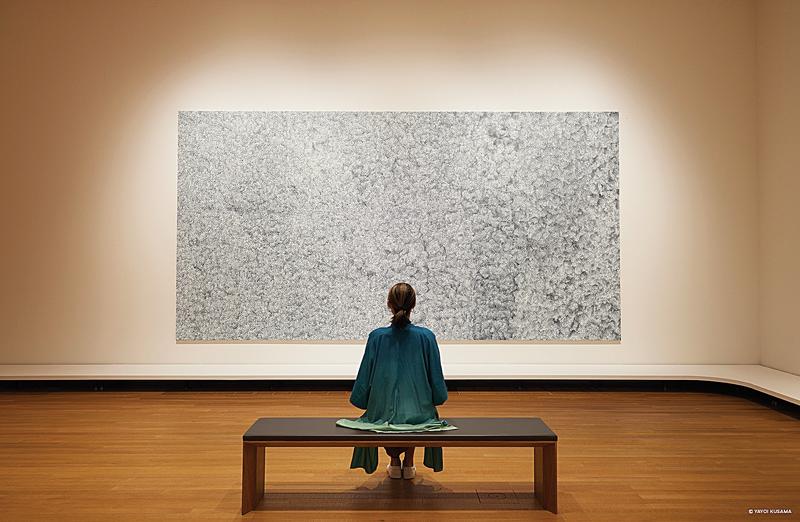 A visitor takes in an infinity net-themed painting by Yayoi Kusama. (PHOTO PROVIDED TO CHINA DAILY BY M+)

A wall text breaks down the artist’s process. While applying the brush strokes, one at a time, helped soothe Kusama’s frayed nerves, the same effect can be experienced by viewers tracing those arcs visually. Transmigration was created with a specific motivation, however.

“There’s a very toxic, green neon quality to the painting,” remarks the exhibition’s co-curator, Mika Yoshitake. “Produced in the same year as the Fukushima nuclear disaster and the (Tohoku earthquake and) tsunami, it was her response to what was happening in the world.”

Yoshitake confirms that Kusama, now 93 and living in a mental health facility, continues to paint every day. The exhibition culminates in a cluster of joyous, life-affirming images done in fluorescent colors over the past summer. In some of these, Kusama has added a folksy spin to her trademark intense concentration of motifs style by swapping her signature dots for eyes and throwing in a mix of earthy hues to the color palette in a way that resonates with the infinite replication of traditional motifs in indigenous art forms of Africa, India and Indonesia. Many of these new works bear the same title: Every Day I Pray for Love.

“She always has a good grasp of the time she’s living in and captures it in her art,” says Midori Yamamura, associate professor of art history at Kingsborough Community College, City University of New York, and author of Yayoi Kusama: Inventing the Singular. “So Kusama’s prayer for love and peace, in her latest series of paintings, might be seen as an extension of the 1960s Flower Power slogan ‘Make Love, Not War’ — a sincere aspiration for a peaceful future, coming from a person who’s lived through the Pacific and Vietnam wars.” 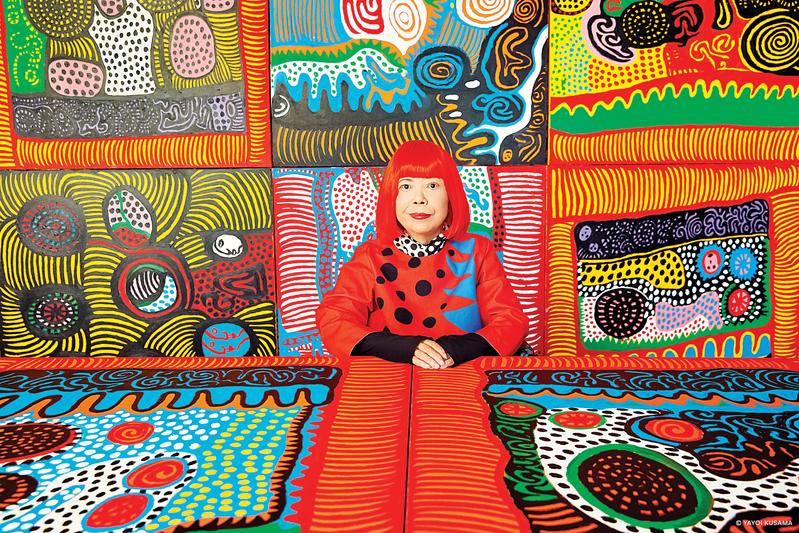 The exhibition embraces Kusama’s 70-plus years of work in its many-splendored variety. While her generic dotted pumpkin sculptures are hard to miss — especially with two large-scale ones installed in the museum’s unticketed public area — the show does not shy away from showing the artist in her most bold, racy and wildly adventurous incarnation. Photographs from Kusama’s activism-based Happenings series of live performances from the late 1960s — at the height of the Beat movement and hence marked by nudity and generally thumbing her nose at normative behavior — are presented in the form of a slideshow. Combined with rare videos of her performances from the 1980s, they document Kusama’s forays into interdisciplinary art — featuring live painting, ceramic sculpture, reading and video. While demonstrating her ability to remain at the forefront of new, experimental forms of self-expression, such archival material also serves as a testament to the artist’s unfailing talent for teasing and provoking her audience.

Perhaps more disturbing than the racy videos is the proliferation of soft phallic forms sewn onto a dancing skirt, protruding from inside ballerina shoes or sticking out all over sofa sets like thorns on cacti. Viewed from a different angle, a monumental, red, flower-shaped soft sculpture is revealed to be a reptile, growing multiple paws all over its reclining body, bringing to mind the cute monsters from TV puppet shows that go rogue without warning.

The M+ exhibition celebrates Kusama’s flair for combining the grotesque and the endearing with élan while borrowing freely from popular culture, reminding us that she made art out of multiple dollar-bill prints and, more famously, mirrored orbs, selling the latter for $2 apiece at the 1966 Venice Biennale, though it was Andy Warhol, also into mass replication with his soup cans at the time, who enjoyed greater visibility. 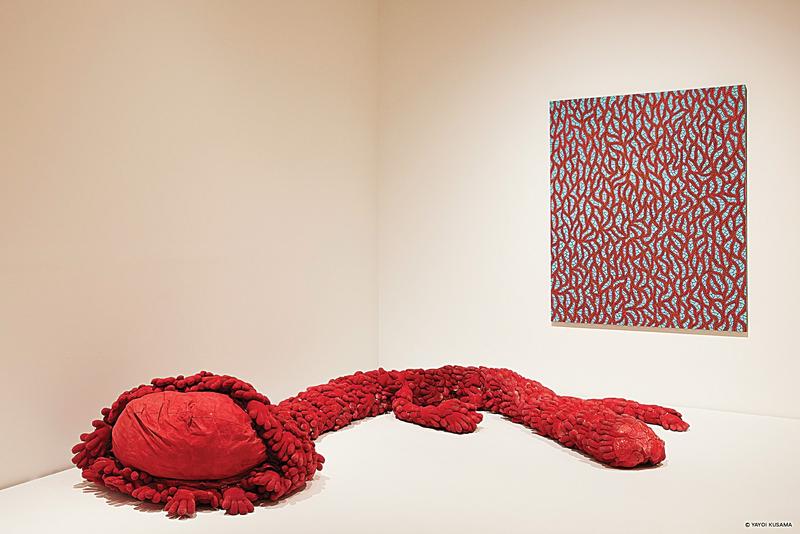 While most of her fellow pioneers of experimental art from the 1960s are no longer around, Kusama is still active and thriving. Her stock is at an all-time high.

As Jacky Ho, head of Evening Sale, 20th and 21st Century Art Department of Christie’s Asia Pacific, points out, “In the past year, Kusama’s auction records were broken twice: in Hong Kong (at a Christie’s Evening Sale in December 2021, when a pumpkin painting fetched over $8 million) and in New York, when Untitled (Nets) sold at a Phillips auction in May for $10.5 million.”

Regardless of what the M+ show might do for Kusama’s prospects in the local market, Ho sounds ecstatic about its educational benefit to a Hong Kong audience, saying he plans to go back several times.

While the disarming relatability of pumpkins and polka dots — and the fact that these work well when adapted into merchandise — has boosted Kusama’s popularity, it probably takes more than a massive following on social media for an artist to stay relevant and influential in her tenth decade.

While he was putting the show together, co-curator Doryun Chong, already reasonably familiar with Kusama’s work, had an epiphany. Struggling his way through the most challenging months of the pandemic, “It made me realize that Kusama had thought about humanity and its relationship with nature and the universe in a deep way for such a long time, and predicted where humanity was going to be.”

“I think through her art you gain a new understanding of life,” he adds. 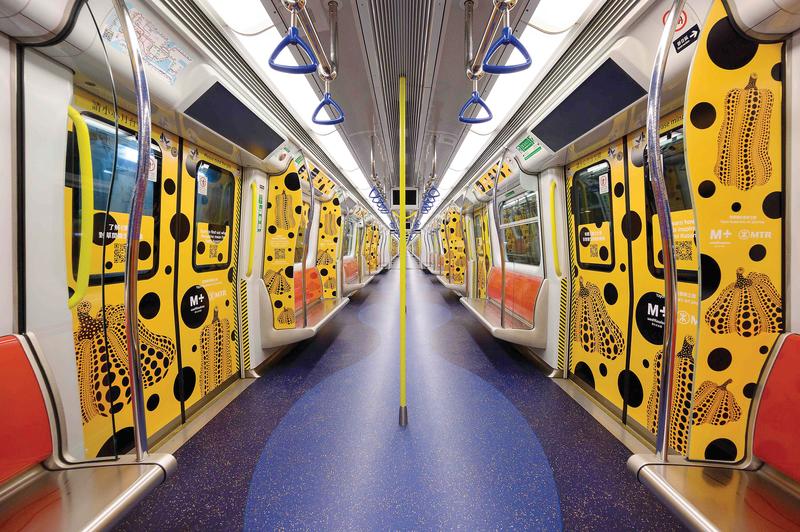 Yayoi Kusama’s generic pumpkin motifs on the walls of MTR trains on the Tuen Ma line. (PHOTO PROVIDED TO CHINA DAILY BY M+)

It appears Kusama herself might have arrived at a new understanding of her role as an artist in society since COVID-19. Death of Nerves (2022), an M+ commission and a monumental public sculpture displayed across three levels, makes for a striking exemplar of this transition. It’s the latest iteration of a fabric sculpture from 1976, on display elsewhere in the show. The older version comprises reams of white fabric with dark spots, like a never-ending speckled ribbon, loosely strung between posts, and bearing Kusama’s signature phallic protrusions.

In its newest avatar, what was an expression of the artist’s struggles with her mental health issues, realized in stark hues of black and white, has been magnified to three times its original size and painted in vivid shades of primary colors that speak to the artist’s endless capacity for renewal and reinvention.