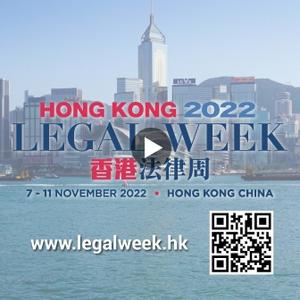 A paradox to the world we live

BANGKOK – The third edition of Bangkok Art Biennale explores two opposite notions of chaos and calm with more than 200 works by 73 international and Thai artists at 12 venues across Bangkok. 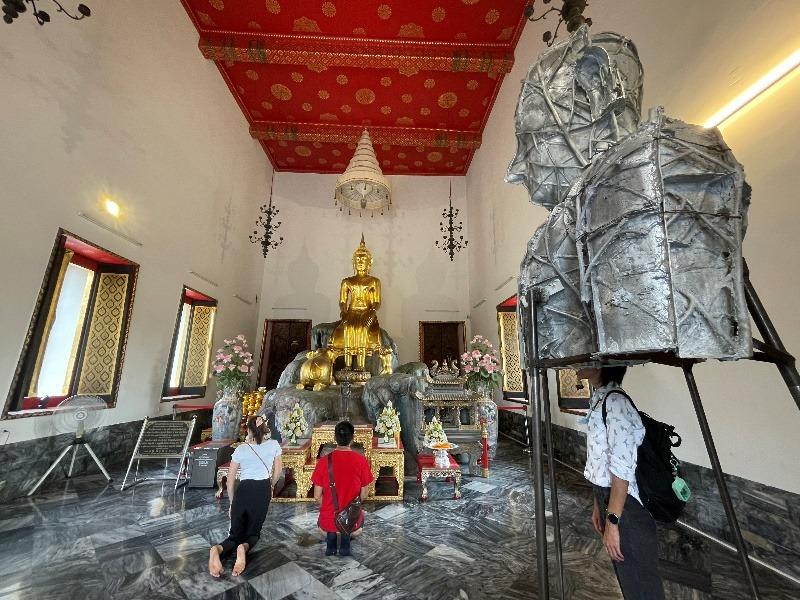 While devout Buddhists are paying respect to a scared Palilai Buddha statue for a healthy spiritual life at a vihara hall of Bangkok’s riverside Wat Pho, an art lover stands inside a massive hollow Buddha bust-like figure fragment “Melting Void” on steel pipe legs by late celebrated Thai artist Montien Boonma to smell the coated herbal pigment evoking a sense of healing. Also exhibited at the temple’s separated corridors are renowned British sculptor Antony Gormley’s two life-size, human-shaped sculptures made of cast iron. His work “Contain” is constructed from rectangular iron blocks in massive volume, while the other work “Connect” is made up of interlocking steel pieces with voids representing the notions of presence and absence and the impermanence of life. 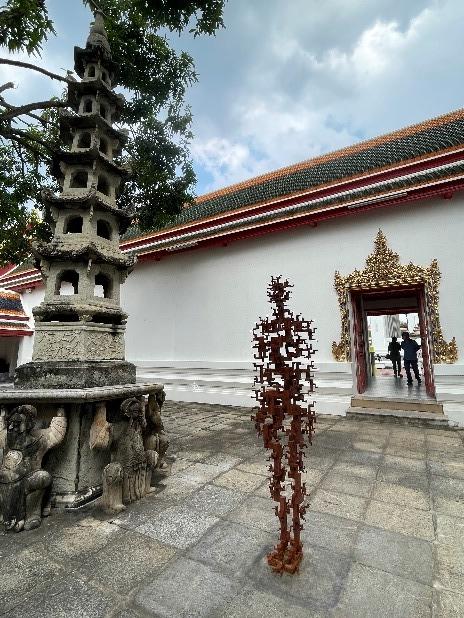 These artworks are part of the third edition of Bangkok Art Biennale 2022 (BAB 2022) based on the theme “Chaos: Calm” reflecting the two opposite notions that people worldwide have faced during the past several years. Continuing until February 23, 2023, more than 200 works in diverse platforms by 73 international and Thai artists can be admired at 12 venues across Bangkok ranging from riverside temples and art galleries to malls and mixed-use projects.

ALSO READ:Shades to dye for

Under the artistic direction of internationally-known curator and art historian Apinan Poshyananda and his curatorial team comprising Nigel Hurst, Loredana Pazzini-Paracciani, Jirat Ratthawongjirakul, and Chomwan Weeraworawit, the concept of a paradox to the world we live is obviously seen through the selections of works and the locations. At the riverside temples of Wat Arun, Wat Prayoon, Wat Pho, and the nearby Museum Siam, the works on display mainly speak on the dialogue of a spiritual mind, an ephemeral and a quest for serenity. On the contrary, the venues in Bangkok’s downtown are largely dominated by artworks that reference social commentary on violence and oppression, inequality, the frailty of the human condition, and a seek to find the intriguing balance between disorder and order.

At Wat Pho, Montien Boonma’s massive Buddha bust-like figure fragment “Melting Void” (1999) interlocked with casting rods represents the chaotic, competitive, and material society, ironically visitors can smell the herbal pigments coated inside and gaze at the marked tiny holes relating to astrological stars. It is an expression of the artist’s hope that a cure will be found for some of the ills of modern society through a return to traditional spiritual values and to remind that just how small and how impermanent we are in the universe. Additionally, the prototype of his well-known 1994 site-specific work “Arokayasala” (Temple of Mind) stacked with steel boxes in the shape of a stupa, evoking the artist’s search for peace after the death of his wife in 1994, is displayed to the public for the first time in a Chinese-style shrine next to the temple’s famous Reclining Buddha. 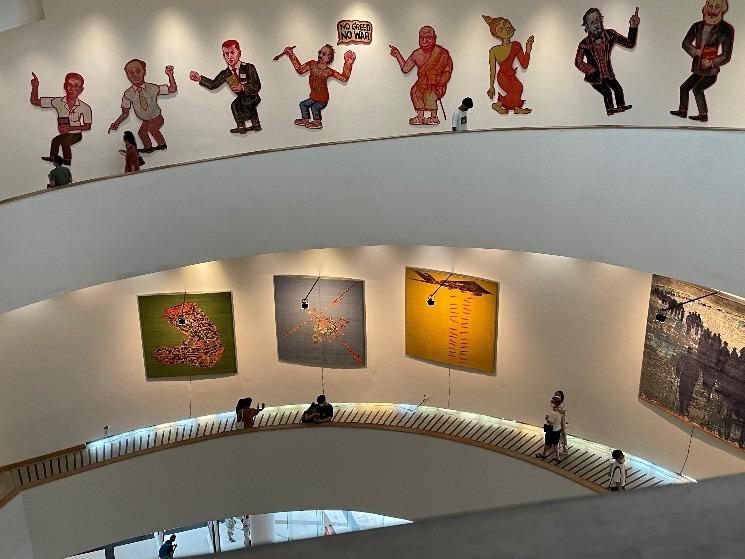 Situated next to Wat Pho is Museum Siam where Japanese artist Tatsuo Miyajima presents his “Wall of Change” project in which five digital numbers are drilled into a glass wall-mounted panel. Every day at the venue, the first five visitors are required to roll a 10-sided die and a staff then hangs the panel corresponding to the numbers rolled on the wall. To him, the numbers 1-9 indicate life and the number 0 for death and one’s life thus keeping constant movement and change. 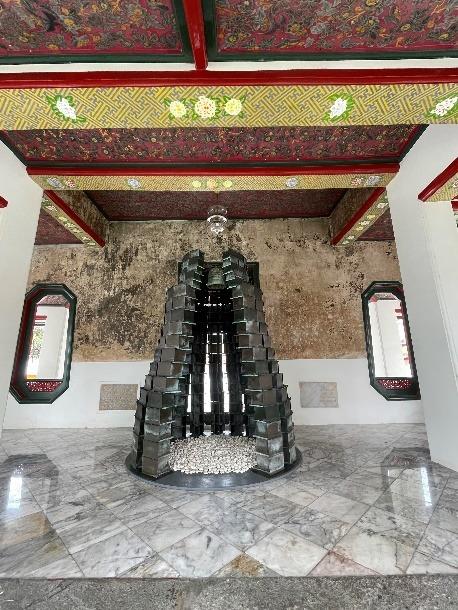 An adjacent room is wrapped with a site-specific wallpaper installation “Integer Studies (Drawing from Life)” comprising 365 drawings that Indian artist Jitish Kallat created daily during the Covid-19 pandemic year of 2021. The drawing of each day is marked with algorithmically-estimated world population growth and death rate of that day to reflect that life is transient and ephemeral.

Building upon the sanctity of the temple, Amsterdam-based artist Alicia Framis presents her pyramid-shaped stainless-steel sculpture “Leave Here Your Fears” at Wat Prayoon’s Khao Mor (artificial rock garden and lake). Visitors can write paper notes anonymously to describe their fears and frustrations and leave them in the sculpture where the papers will remain inside without removing them.

ALSO READ: A view to a kill

Bangkok Art and Culture Centre (BACC) is BAB’s main venue with nearly 100 artworks on display taken over the seventh to the ninth floors in diverse platforms and dialogues. The popular Facebook page Uninspired by Current Events which always bites Thai political conflicts, censorships, and social inequality with its surreal renders inspired by current events has come out from the newsfeed to present an interactive game allowing visitors to navigate monuments in Thailand in satirical ways.

While Thai emerging performance artist Phitchapha Wangprasertkul cages herself in a cramped transparent box eight hours a day to question the living condition and wages of office workers in the metropolis, Collective Absentia from Myanmar presents his durational performance titled “Again and Again” in an adjacent empty room by sitting silently on a transparent chair with his head covered in a black hood to tackle the issues around the collective trauma of political violence and injustice happening all over the world.

Finding a balance in the chaotic world involves chance and the loss of overall control and British artist Rachel Kneebone’s distorted porcelain sculptures with recumbent limbs stretching out into surrounding space and spheres and ribbons interweaving together play with beauty and chaos, strength and fragility, control and unpredictability. Though having knowledge of the nature of porcelain and a kind of control, the artist admits that the overall control cannot be made to achieve a perfect balance between states. 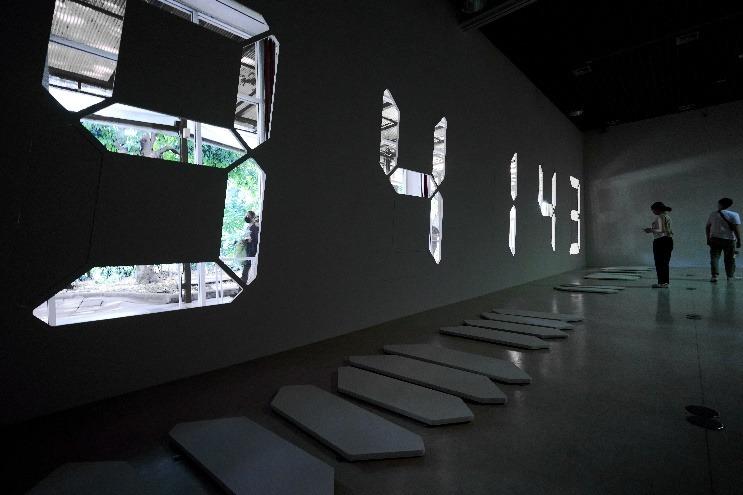 Influenced by the life of Captain Cook who died in Hawaii in 1779 and Johann Zoffany’s painting The Death of Captain James Cook (1795), Australian artist Ben Quilty presents his abstract oil painting “The Alien, Cook’s Death after Zoffany” to address social and political unrest and the notions of identity and patriotism. 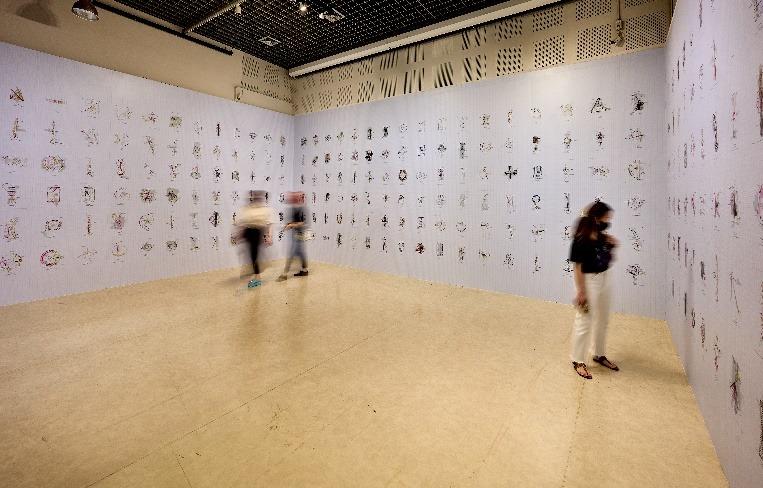 “Linking my own Irish convict ancestry to British colonization and then my own identity as a white Irish Australian on a continent inhabited by a deeply sophisticated and cultured indigenous people for more than sixty thousand years has been a focus of my work for almost 20 years. Australia is a very racist country and history is constantly contested and rewritten. The truth of colonization is only now being reconciled,” he states. 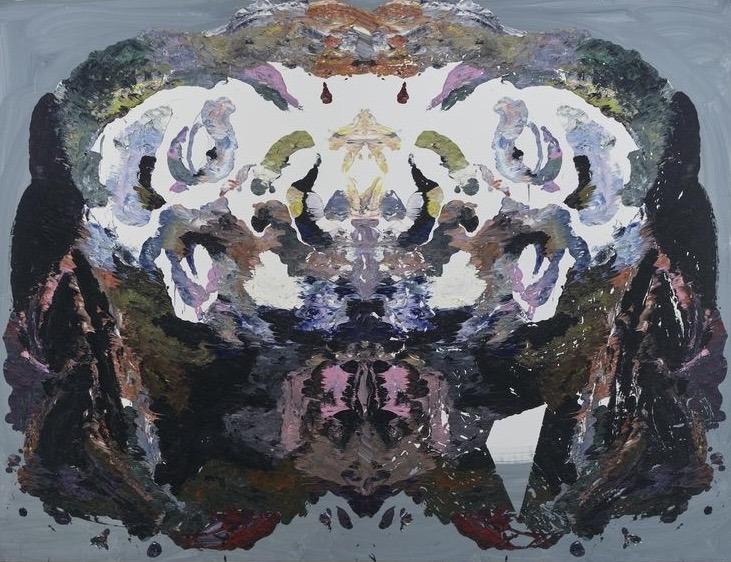 "The Alien, Cook's Death after Zoffany” by Ben Quilty at BACC (COURTESY OF BEN QUALITY)

The exhibiting space called BAB Box at the Queen Sirikit National Convention Center (QSNCC) is largely dominated by large-scale installation arts. Focusing on conflict, humanitarian crisis, and displacement that have been traumatized by human destruction, Vietnamese female artist Tiffany Chung’s “One’s Shadow in Ruins and Rubble” features 31 hand-crafted wooden lightboxes displaying found photographs of war-torn homes in Syria that have been reduced to rubble by the country’s ongoing civil war. Displaying in the same room is her new 3-channel video work “If Water Has Memories”, commissioned by the biennale and filmed the body of water in the south of Thailand, to pay homage to those who were assaulted, raped, abducted, and lost their lives at sea during the height of pirate attacks on the post-1975 Vietnamese refugees in the Gulf of Thailand. 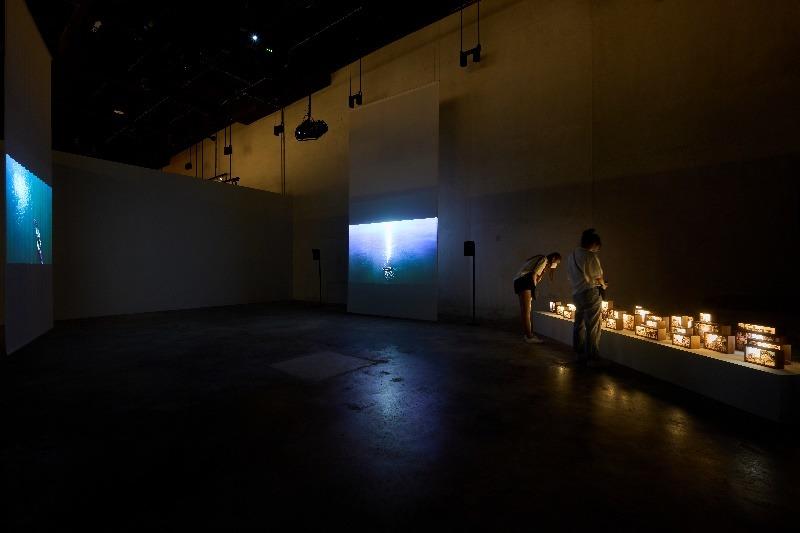 Known for her symbolic representations of breasts in various media, Thai female artist Pinaree Sanpitak showcases the interactive installation “Anything Can Break”, debuted in 2012 at the 18th Biennale of Sydney, that is made up of suspending hundreds of origami cubes and breast-shaped, hand-blown glass forms conveying a sense of fragility. The work has combined fiber optics and motion sensors that respond to the physical presence of the audience. 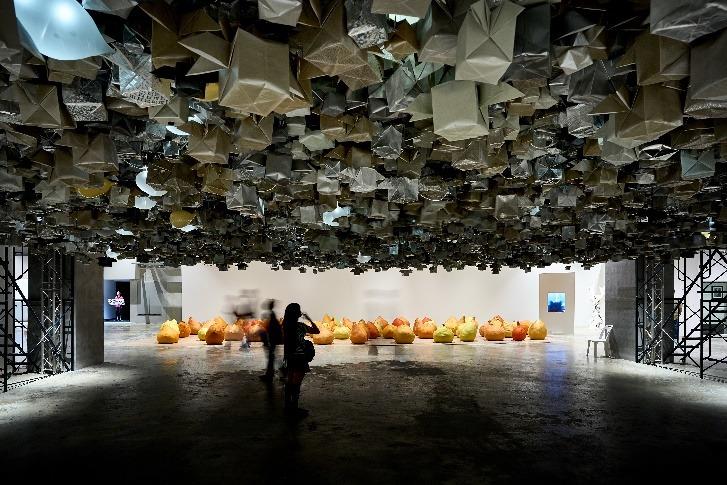 Responding to the biennale’s theme of finding the intriguing balance between chaos and calm, Japanese female artist Chiharu Shiota creates the massive installation “Eye of the Storm” made of suspending networks of red threads with thousands of sheets of white paper swirling like a typhoon inside. The papers are wildly whirling and rustling as if blown by the wind, but the center stays quiet to explore the sensation of these contrasting notions in the current circumstances. 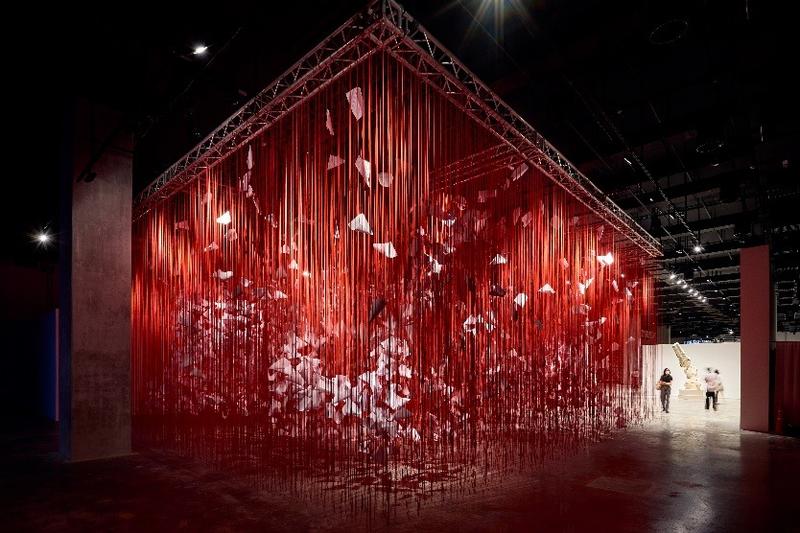