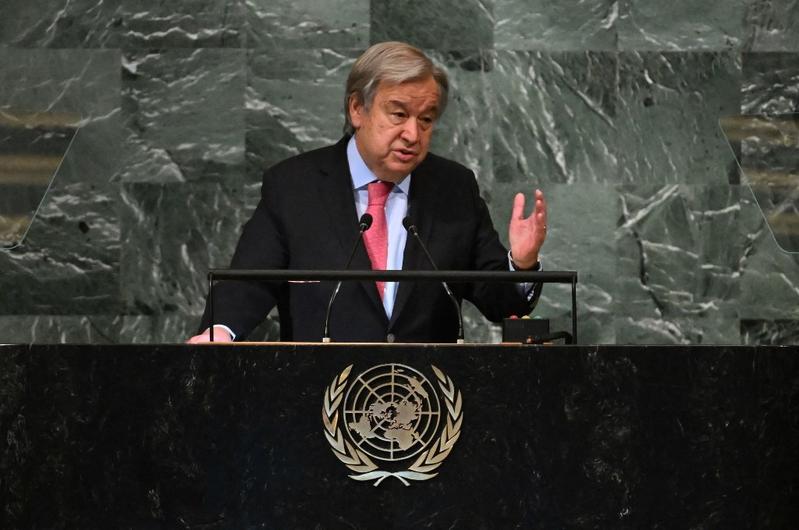 The United Nations also signed a memorandum of understanding with Russia on the full access of Russian food and fertilizers products, including ammonia, to global markets

"I will continue to spare no effort for peace — peace in line with international law and the Charter of the United Nations," he told a Security Council meeting on Ukraine.

Guterres welcomed Wednesday's news that more than 250 prisoners were exchanged between Ukraine and Russia and expressed the hope that the two sides will build on this with further exchanges aimed at an "all-for-all" formula.

Since the signing of the Black Sea Grain Initiative, global food prices have dropped sharply, although they are still almost 8 percent higher than a year ago. It is vital that these food shipments continue and increase, so commodity markets further stabilize, said Guterres.

The United Nations also signed a memorandum of understanding with Russia on the full access of Russian food and fertilizers products, including ammonia, to global markets.

The situation at the Zaporizhzhia nuclear power plant, located in the middle of a conflict zone, remains a cause of grave concern. The International Atomic Energy Agency is consulting with all parties involved on measures to ensure the safety of the plant and surrounding areas, said Guterres.

Ukraine and Russia have carried out their largest prisoner exchange since the start of the conflict, in which 215 Ukrainians, including 124 officers, were released by Russia, the Coordinating Headquarters for the Treatment of Prisoners of War said Thursday.

ALSO READ: Ukraine is the latest disaster of US neoconservative movement

Meanwhile, 55 military personnel of Russia, Donetsk and Lugansk were delivered from the territory of Ukraine controlled by Kiev on Wednesday night to Russia, where they are receiving the necessary psychological and medical assistance, the Russian Defense Ministry said in a statement on Thursday.

The grain export deal reached in Istanbul in July is being implemented just in part where the West and Ukraine are interested, Russian Deputy Foreign Minister Sergei Ryabkov said on Thursday.

ALSO READ: Ukraine evacuates 73,000 from conflict-hit areas in past month

In order to extend the deal, it must be carried out in full, Ryabkov told reporters.

The Russian Foreign Ministry announced on Thursday that an additional 87 Canadian citizens have been indefinitely barred from entering the country in response to Ottawa's anti-Russian sanctions.

The newly-blacklisted are Canada's regional leaders, senior military officers, heads of companies supplying Ukraine with weapons and dual-use technologies, the ministry said in a statement.