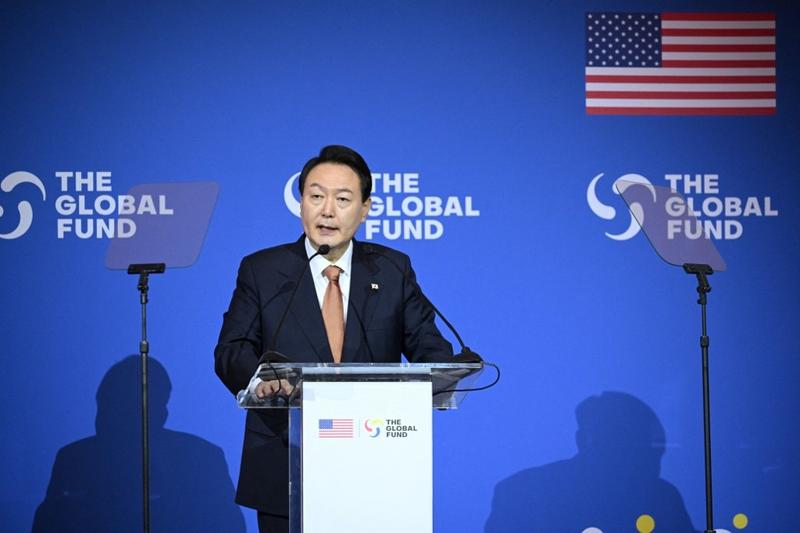 SEOUL - A series of gaffes and controversies is overshadowing South Korean President Yoon Suk-yeol's first major overseas tour, sending his ratings plunging and inviting scathing criticism from some lawmakers even within his own party.

This week, Yoon visited London for the funeral of Queen Elizabeth and then New York in his first US trip to attend the UN General Assembly, before arriving in Canada on Thursday.

In the highest profile controversy, Yoon was caught cursing on a hot mic as he left an event in New York on Wednesday after a brief chat with US President Joe Biden.

"What an embarrassment ... if these bastards refuse to approve it in parliament," Yoon told Foreign Minister Park Jin in a video aired by South Korean broadcasters, which went viral on social media.

Opposition lawmakers accused Yoon of insulting Biden and disgracing South Korea as media initially reported Yoon was saying Biden would be embarrassed if the US Congress did not pass a bill relating to funding of a global initiative.

His press secretary, Kim Eun-hye, dismissed the accusation, saying Yoon was referring to the South Korean parliament without mentioning Biden.

Reuters could not independently verify what exactly Yoon said.

Yoon's crude comments prompted criticism from some members of his own party, with its floor leader calling it "greatly regrettable."

Officials had hoped the trip would be a chance to show Yoon's vision for what they called a "global pivotal state," deterring North Korea's weapons tests and address other pressing issues including US subsidies for electric vehicles.

Opposition lawmakers also accused Yoon of "demeaning national prestige" by failing to pay tribute to Queen Elizabeth on his first day in London, for which his office blamed heavy traffic. Traffic was tightly controlled in London as mourners queued for miles to see the queen's coffin, and some high-level guests including French President Emmanuel Macron arrived there on foot.

They also criticized Yoon for failing to hold proper summits with Biden and Japanese Prime Minister Fumio Kishida, describing his trip as a "diplomatic disaster."

Yoon and Biden had planned informal talks in New York, but ended up having just a 48-second chat at the Global Fund. Yoon's office said that was a "Plan B" due to changes in Biden's schedule, and said they also met in London when Yoon raised the EV subsidies issue.

ALSO READ: ROK's Yoon says any talks with DPRK should be more than show

An official at Yoon's office said there was a "disparity in opinions" over the timing of the announcement of the talks and Tokyo seemed "cautious" as both sides explore ways to improve strained ties.

The diplomatic controveries could make it more difficult for Yoon to win the support of the opposition that holds a majority in parliament to pass legislation or boost his policy drive and have helped cut short his voter honeymoon after his May election win. Yoon's his approval ratings fell to 28 percent in a survey by Gallup released on Friday from last week's 33 percent.