By Mo Jingxi and Zhang Yunbi in Beijing and Ren Qi in Nur-Sultan, Kazakhstan 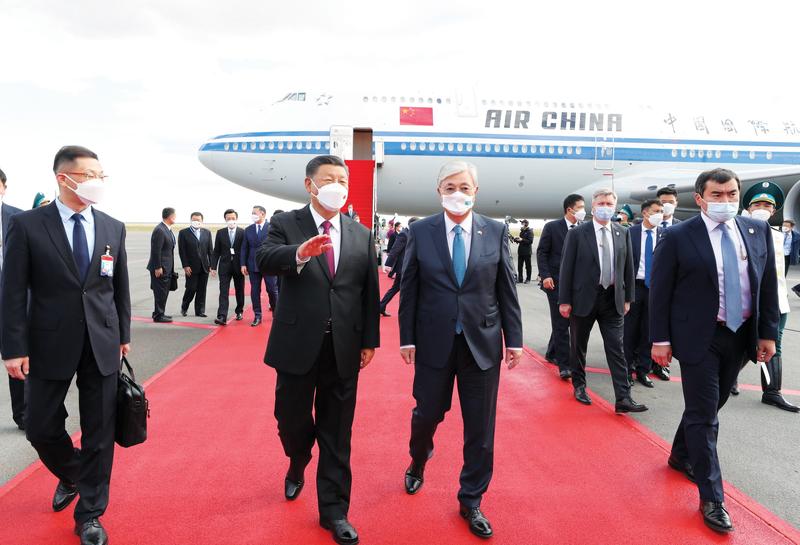 President Xi Jinping is warmly welcomed by Kazakh President Kassym-Jomart Tokayev after his arrival at Nursultan Nazarbayev International Airport in Nur-Sultan, the capital of Kazakhstan, on Sept 14 for a state visit. (YAO DAWEI / XINHUA)

President Xi Jinping spoke highly on Sept 14 of China-Kazakhstan friendship and cooperation as he met with Kazakh President Kassym-Jomart Tokayev in the neighboring country’s capital, Nur-Sultan, saying China is willing to work with Kazakhstan to ensure that they are strong supporters of each other’s development and rejuvenation.

As this year marks the 30th anniversary of establishing diplomatic relations between China and Kazakhstan, Xi, who was making a state visit to the Central Asian nation, said the two countries have witnessed fruitful results in bilateral ties over the past years and taken the lead on a series of issues, from solving border issues to conducting international production capacity cooperation.

China highly values developing its relations with Kazakhstan and firmly supports the reform measures it has taken to safeguard national stability and development, Xi said, adding that China will always be a friend and partner that Kazakhstan can trust and rely on.

Noting that China-Kazakhstan cooperation enjoys a solid foundation, huge potential and broad prospects, the Chinese president urged that both sides make good use of existing mechanisms to deepen strategic alignment and leverage their complementary advantages to take bilateral cooperation to a higher level and a larger scale.

He also called on the two countries to promote high-quality Belt and Road development, expand cooperation in such areas as trade, the economy and interconnectivity, and explore cooperation in new fields including big data, digital finance and green energy.

Tokayev said Xi’s visit, the Chinese president’s first foreign trip since the outbreak of the COVID-19 pandemic, fully demonstrated the two countries’ high-level mutual trust and will surely become a new milestone in the history of Kazakhstan-China relations.

As next year marks the 10th anniversary of Xi’s proposing the Belt and Road Initiative in Kazakhstan, Tokayev said his country will continue to support and participate in the joint building of the Belt and Road.

He also said that Kazakhstan hopes to further align its development strategies with China and deepen bilateral cooperation in various fields, including infrastructure, energy and tourism.

After their meeting, the two leaders signed a joint statement commemorating the 30th anniversary of the establishment of diplomatic relations between the two countries.

The two governments also signed a number of cooperative documents in areas such as finance and the media, and decided to set up consulates general in Xi’an and Aktobe.

When Xi arrived in Nur-Sultan in the afternoon on Sept 14, he was warmly welcomed by Tokayev and a group of senior officials. Tokayev also later saw Xi off at the airport.

Later that day, President Xi was awarded the Order of the Golden Eagle, or “Altyn Qyran” Order, the highest honor of Kazakhstan by President Tokayev.

Officials and experts said Xi’s visit will further deepen the two nations’ political mutual trust, broaden the scope of their all-around collaboration and usher in another “golden 30 years” for bilateral ties.

According to Chinese Ambassador to Kazakhstan Zhang Xiao, the two countries have identified 52 cooperative projects on production capacity in mining, energy, industry, commerce, transportation and shipping.

Yerlan Madiyev, a China expert at the World Economy and Politics Institute, a Kazakh think tank, said China has long supported the construction and socioeconomic development of Central Asian countries, and has gained trust from countries in the region.

“China has always been one of the most important strategic partners of Kazakhstan in every field of bilateral cooperation,” he said.

China is Kazakhstan’s fifth-largest source of foreign investment, and amid the ravaging COVID-19 pandemic, bilateral trade continues to grow at a rapid rate, he added.

Bulat Sultanov, director of the Research Institute of International and Regional Cooperation at Kazakh-German University, said China-Kazakhstan strategic cooperation is “of particular importance in the current situation”.

Amid the current geopolitical changes in the world, China-Kazakhstan teamwork could focus on attracting more Chinese investment to Kazakhstan and boosting the synergy of the development visions pursued by the two countries, he added.

The scholar highlighted promising areas for the two nations to work on, such as establishing a “digital Silk Road” based on digital technologies and boosting exports of Kazakhstan’s agricultural products to China.