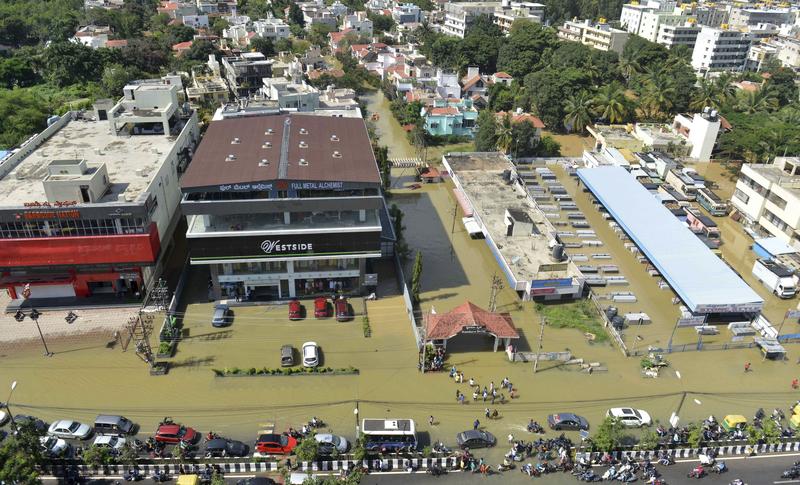 A view of a flooded area after heavy rainfall in Bangalore, India on Sept 5, 2022. (KASHIF MASOOD / AP)

BENGALURU – Harish Pullanoor spent his weekends in the late 1980s tramping around the marshes and ponds of Yemalur, an area then on the eastern edge of the Indian metropolis of Bengaluru, where his cousins would join him catching small freshwater fish.

In the 1990s, Bengaluru, once a genteel city of gardens, lakes and a cool climate, rapidly became India's answer to Silicon Valley, attracting millions of workers and the regional headquarters of some of the world's biggest IT companies.

The untrammeled expansion came at a price.

Concrete replaced green spaces and construction around the edge of lakes blocked off connecting canals, limiting the city's capacity to absorb and siphon off water.

Last week, after the city's heaviest rains in decades, the Yemalur neighborhood was submerged under waist-deep water along with some other parts of Bengaluru, disrupting the southern metropolis' IT industry and dealing a blow to its reputation.

Residents fed up with gridlocked traffic and water shortages during the dry season have long complained about the city's infrastructure.

But flooding during the monsoon has raised fresh questions about the sustainability of rapid urban development, especially if weather patterns become more erratic and intense because of climate change.

Bengaluru hosts more than 3,500 IT companies and some 79 "tech parks" - upmarket premises that house offices and entertainment areas catering to technology workers

"It's very, very sad," said Pullanoor, who was born close to Yemalur but now lives in the western city of Mumbai, parts of which also face sporadic flooding like many of India's urban centers.

Big businesses are also complaining about worsening disruptions, which they say can cost them tens of millions of dollars in a single day.

Bengaluru hosts more than 3,500 IT companies and some 79 "tech parks" - upmarket premises that house offices and entertainment areas catering to technology workers.

Wading through flooded highways last week, they struggled to reach modern glass-faced complexes in and around Yemalur where multinational firms including JP Morgan and Deloitte operate alongside large Indian start-ups.

Millionaire entrepreneurs were among those forced to escape flooded living rooms and swamped bedrooms on the back of tractors.

Insurance companies said initial estimates for loss of property ran into millions of rupees, with numbers expected to go up in the next few days. 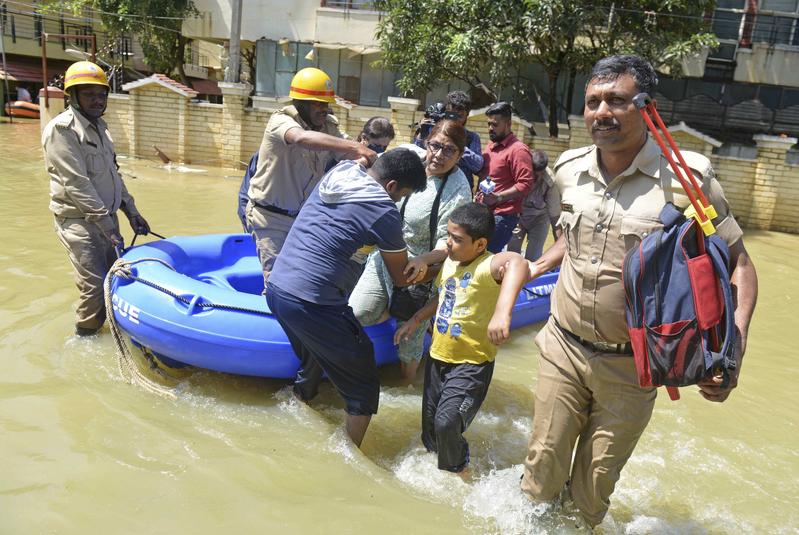 The latest chaos triggered renewed worries from the $194 billion Indian IT services industry that is concentrated around the city.

"India is a tech hub for global enterprises, so any disruption here will have a global impact. Bangalore, being the center of IT, will be no exception to this," said K.S. Viswanathan, vice president at industry lobby group the National Association of Software and Services Companies.

Bangalore was renamed Bengaluru in 2014.

NASSCOM is currently working to identify 15 new cities that could become software export hubs, said Viswanathan, who is driving the project.

"It is not a city-versus-city story," he told Reuters. "We as a country don't want to miss out on revenue and business opportunities because of a lack of infrastructure."

Even before the floods, some business groups including the Outer Ring Road Companies Association that is led by executives from Intel, Goldman Sachs, Microsoft and Wipro, warned inadequate infrastructure in Bengaluru could encourage companies to leave.

"We have been talking about these for years," Krishna Kumar, general manager of ORRCA, said last week of problems related to Bengaluru's infrastructure. "We have come to a serious point now and all companies are on the same page."

In the early 1970s, more than 68 percent of Bengaluru was covered in vegetation.

By the late 1990s, the city's green cover had dropped to around 45% and by 2021 to less than 3% of its total area of 741 square kilometres, according to an analysis by TV Ramachandra of Bengaluru's Indian Institute of Science.

"If this trend continues, by 2025, 98.5% (of the city) will be choked with concrete," said Ramachandra, who is part of IISC's Centre for Ecological Sciences.

Rapid urban expansion, often featuring illegal structures built without permission, has affected Bengaluru's nearly 200 lakes and a network of canals that once connected them, according to experts.

Rapid urban expansion, often featuring illegal structures built without permission, has affected Bengaluru's nearly 200 lakes and a network of canals that once connected them, according to experts

So when heavy rains lash the city like they did last week, drainage systems are unable to keep up, especially in low-lying areas like Yemalur.

"All the encroachments will be removed without any mercy," Karnataka Chief Minister Basavaraj Bommai told reporters. "I will personally go and inspect."

Authorities have identified around 50 areas in Bengaluru that have been illegally developed. Those included high-end villas and apartments, according to Tushar Girinath, Chief Commissioner of Bengaluru's civic authority.

Last week, the state government also announced it would set up a body to manage Bengaluru's traffic and start discussions on a new storm water drainage project along a major highway.

Critics called the initiatives a knee-jerk reaction that could peter out.

"Every time it floods, only then we discuss," said IISC's Ramachandra. "Bengaluru is decaying. It will die."